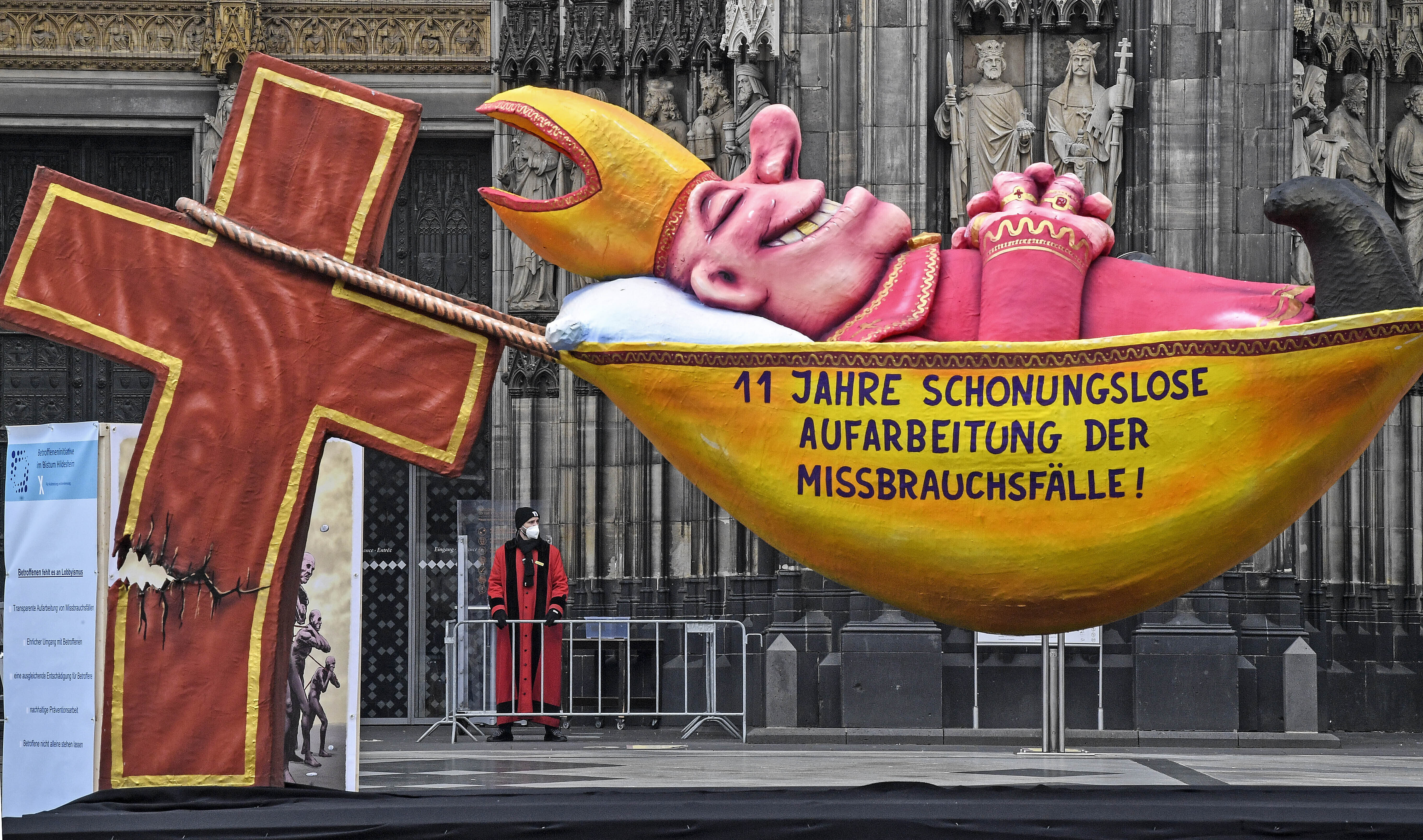 A carnival float depicting a sleeping Cardinal, reading '11 years of relentless processing of cases of abuse' is set in front of the Cologne Cathedral to protest against the Catholic Church in Cologne, Germany, Thursday, March 18, 2021. (AP Photo/Martin Meissner, File)

BERLIN — A prominent Roman Catholic archbishop who faced strong criticism for his handling of the church's sexual abuse scandal in Germany said Wednesday that he has offered his resignation to Pope Francis following a "spiritual timeout" granted by the pontiff.

Cardinal Rainer Maria Woelki, the archbishop of Cologne, marked his return to work with a lengthy letter to the faithful in which said he was "not returning unchanged, as if nothing had happened in this time."

Woelki has become a deeply divisive figure in the German church. In September, the Vatican said that Francis had decided to leave him in office but also give the cardinal the several-month timeout after he made what it termed "major errors" of communication.

In his letter to the faithful, Woelki said he has "reflected and meditated" repeatedly about his actions and the situation in the archdiocese.

He said that he has "made my service and my office as archbishop of Cologne available to the Holy Father, so that he is free to decide what best serves the good of the church."

The Cologne archdiocese said Francis would make a decision on accepting Woelki's resignation "in due course," without elaborating.

Woelki said the timeout had been necessary because he was suffering from "physical and mental exhaustion" in the fall. He asked for the faithful to "give me — no, us — another chance."

A report commissioned by the archbishop and issued last March found 75 cases in which eight high-ranking officials — including Woelki's late predecessor — neglected their duties to either follow up on, report or sanction cases of alleged abuse by clergy and lay church employees, and failed to take care of the victims.

Hamburg Archbishop Stefan Hesse, previously a senior church official in Cologne, was faulted for 11 cases of neglecting his duty. Hesse offered his resignation to Francis, who eventually rejected it in September.

The report absolved Woelki himself of any neglect of his legal duty with respect to abuse victims. He subsequently said he made mistakes in past cases involving sexual abuse allegations but made clear that he had no intention of resigning.

Woelki infuriated many local Catholics by citing legal concerns to keep under wraps a first report on how local church officials reacted when priests were accused of sexual abuse. He commissioned the new report — an 800-page investigation based on church files and put together by a German law firm.

The furor over Woelki was followed in January by the release of a long-anticipated independent report commissioned by the Munich archdiocese into decades of abuse cases there. The report faulted their handling by a string of church officials past and present, including retired Pope Benedict XVI, who as Cardinal Joseph Ratzinger was archbishop of Munich from 1977 to 1982.

Benedict subsequently asked forgiveness for any "grievous faults" in his handling of clergy sex abuse cases, but denied any personal or specific wrongdoing.