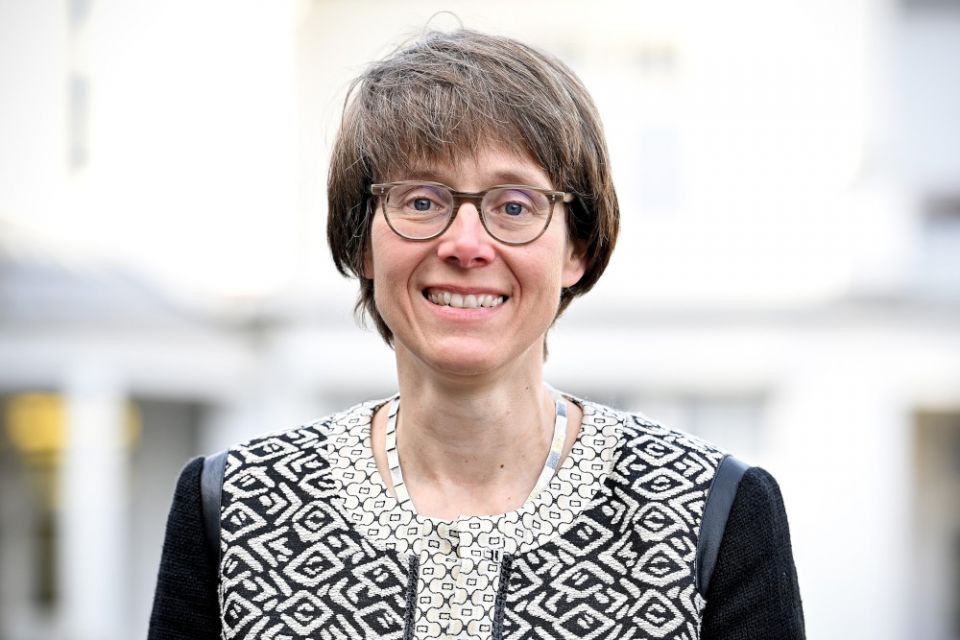 Beate Gilles, the newly appointed general secretary of the German bishops' conference, poses in Bonn Feb. 23, 2021. Gilles, a 50-year-old theologian, became the first noncleric and woman to head the bishops' secretariat. She will take up her post July 1. (CNS/Pool via KNA/Sascha Steinback)

Berlin — The German bishops' conference elected a woman as general secretary during a virtual assembly that turned into a crisis meeting focused on the church's handling of sex abuse.

Beate Gilles, a 50-year-old theologian, became the first noncleric and woman to head the bishops' secretariat. She will take up her post July 1.

"Last year, there was still the debate of whether a woman could hold such an office here. Now we know it is possible," she said Feb. 23 at the news conference after her election.

Limburg Bishop Georg Bätzing, president of the bishops' conference, said the appointment was a strong signal "that the bishops are honoring their agreement to promote women in leading positions."

Yet Gilles' election could not distract from the fact that the Catholic Church in Germany is under pressure and at a critical point. It has fallen into disrepute among its members after a litany of accusations of inadequate investigations into and cover-ups of past sexual abuse.

"As long as there is no honest, open and complete reappraisal of sexual abuse in all German dioceses set at a high scientific level and with the same standards for all, the reform efforts ... will come to nothing," said a statement from the Catholic Lay Alliance, representing seven lay organizations.

At the center of the storm is Cologne Cardinal Rainer Maria Woelki. After he commissioned a report to clear up past sexual abuse cases, especially how they were handled, in the Archdiocese of Cologne, he refused to make it public, saying it contained deficiencies. He ordered a new report, scheduled to be published March 18. Parish councils, priests and most recently the diocesan council have criticized the cardinal for his handling of the abuse investigation.

While other dioceses also are dealing with abuse allegations, Woelki is seen as a symbol for the cover-up in the Catholic Church, as more and more German Catholics are turning their backs on the church. Others, like the lay alliance, are calling for fundamental changes.

In Germany, church affiliations are registered with the government, which collects church tax on behalf of the churches. This normally amounts to 5%-8% of a church member's income. 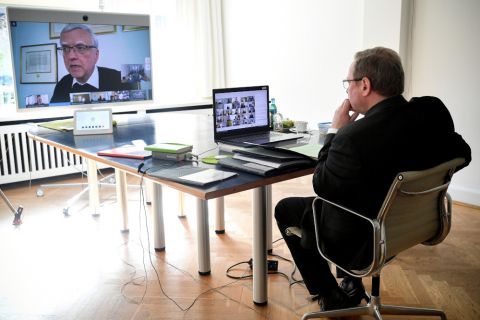 At a news conference Feb. 25, Bätzing admitted that people leaving the church would eventually affect church finances. He also admitted that troubles in the Cologne Archdiocese overshadowed the spring plenary.

He reiterated that he has openly called Woelki's crisis management "a disaster. I have advised him to pursue a different course." He said the bishops' conference cannot make any decision on Woelki's future; only the apostolic nuncio can.

In his formal, final 17-page statement after the plenary, Bätzing addressed the fact that public opinion at the moment focuses on the Archdiocese of Cologne.

"I would like to clarify: Yes, there are many people leaving the church, also because of the image that the church is currently projecting. And certainly, there are many things that need to be clarified in the Archdiocese of Cologne. But to focus solely on the Archbishop of Cologne would be too shortsighted. On the contrary: all bishops of all 27 dioceses bear a responsibility for the situation, and we all have to face the criticism."

He said much progress has been made in the last decade, since the first cases of sexual abuse in the German Catholic Church became public in 2010, "but of course there is still a lot to do. The issue is in no way closed, nor will it ever be with a view to prevention. However, I reject the accusation that the bishops have been silent or have done nothing for years."

During the meeting, the bishops also discussed the Synodal Path, which is debating the issues of power, sexual morality, priestly life and the role of women in the church. It also heard a report from an ecumenical working group on shared Communion and discussed the dire situation of refugees on the EU borders. Bätzing asked EU governments to get involved in a situation that he described as a blot on the European Union.

One year after Vatican abuse summit, survivors grade Pope Francis with 'D minus'