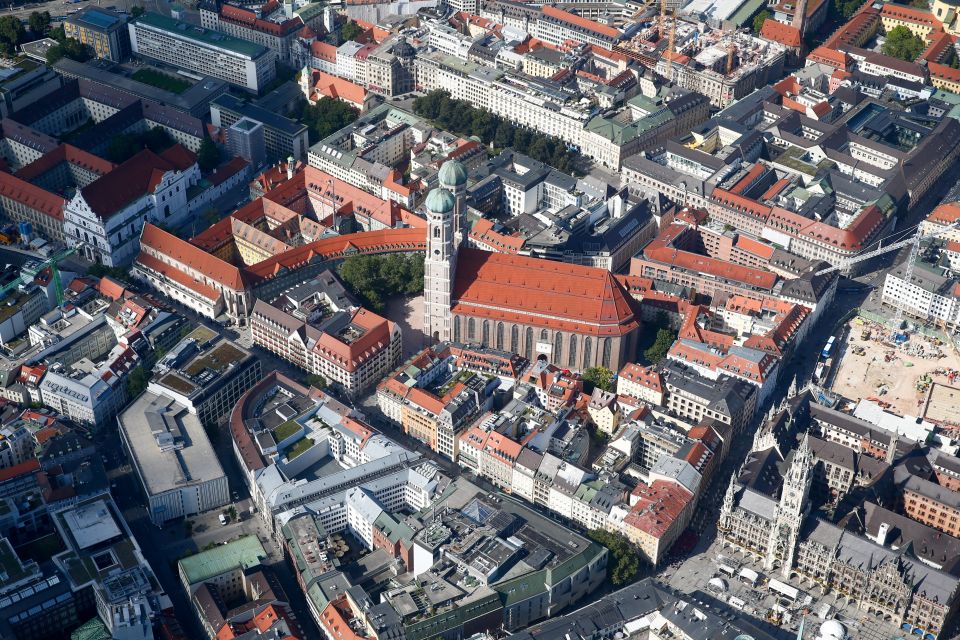 An aerial view shows the Cathedral of Our Lady in Munich Sept. 5, 2021. (CNS photo/Michaela Rehle, Reuters)

Munich — As Germans await publication of a report on how leaders of the Archdiocese of Munich and Freising handled cases of historic abuse, a canon lawyer casts doubt on accusations against retired Pope Benedict XVI over possible negligence.

Helmuth Pree, a retired university professor, wrote in the weekly newspaper Die Zeit that the presumption of innocence must also apply to a pope. The German Catholic news agency KNA reported he was responding to media coverage about information said to be in the abuse report, due out Jan. 20.

KNA reported Pree expressed surprise at the media coverage of the case in early January. He criticized the assessments canon law professors Norbert Lüdecke and Bernhard Anuth had given in a joint interview. The two church law experts said Archbishop Ratzinger violated his duty in 1980 by not informing the Vatican Congregation for the Doctrine of the Faith after the archdiocese took in a priest who had committed abuse in the Diocese of Essen.

Pree wrote that it had “not been established to this day” whether such an obligation to inform the Vatican actually existed. The corresponding administrative regulation of 1962 was a “secret decree” that was “never properly announced.”

Pree added: “There is no evidence whatsoever that the instruction was known in Munich.” For this reason, “it needs to be explained why Cardinal Ratzinger, of all people, could have known about it in 1980.”

Pree said that to arrive at a “possibly more comprehensive and objective assessment,” the public should wait for the findings of the Jan. 20 report on abuse by a Munich law firm.

Meanwhile, criminologist Christian Pfeiffer called on German state prosecutors to become more active in tackling church abuse cases. He said the judiciary had “dealt with the churches in the same way as one enters a church — quietly, respectfully, on tiptoe. This treading lightly must stop,” Pfeiffer wrote in a guest commentary for the newspaper Die Zeit.

He asked why state prosecutors had not launched investigations against dioceses and why information suggesting that files had been shredded did not trigger searches.

Pfeiffer also accused the German bishops' conference and its former president, Cardinal Reinhard Marx of Munich, of having “prevented rather than enabled” the investigation of abuse over the years.

Conditions in the church still remained “unacceptable in a constitutional state,” Pfeiffer continued, citing “authoritarian power structures that enable cover-ups” and “arrogant bishops who only feel accountable to the pope.”

The church had pledged to punish abuse through canon law and to apply the state's criminal laws as well, Pfeiffer said. He said the test of strength, of whether a prosecutor would be able to beat a path to the bishop's “poison cabinets” containing sensitive information in abuse cases, had not happened.