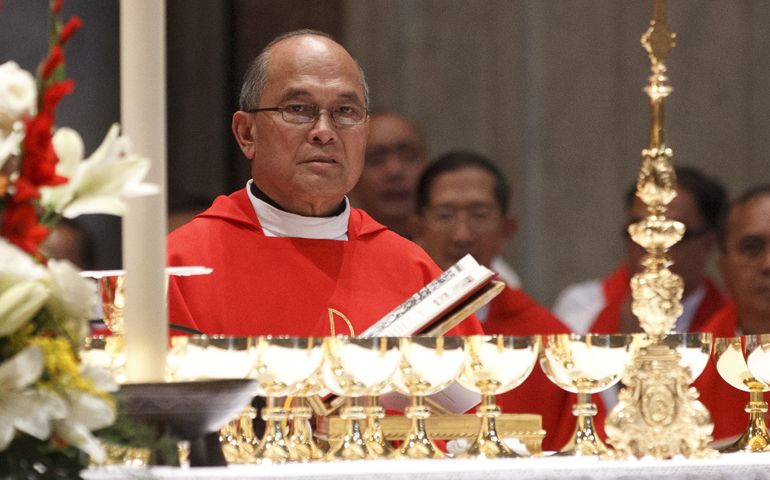 Hagatna, Guam — Guam has removed the statute of limitations on civil litigation in cases involving accusations of child sex abuse over the objections of the Catholic archdiocese.

Gov. Eddie Calvo signed Bill 326-33 into law late Sept. 23 amid a flurry of controversy from both oppositional and proponent parties. Among the opponents was the Agana archdiocese, which circulated among parishioners a petition asking the governor to veto the bill.

Guam, a U.S. island territory in the North Pacific Ocean between Hawaii and the Philippines, has a population of about 162,000 people. Eighty-five percent of its population is Catholic.

Calvo explained the reasoning behind his decision as being well thought out and comprehensive, but that ultimately his decision was based on his ethical responsibility to address injustice.

"Bill No. 326 opens justice's door to an aggrieved group of people -- children --systematically denied justice over years. And that is why I signed it into law," he explained in a transmittal letter sent to the speaker of the Guam Legislature, but addressed to the people of Guam. "Finally, these survivors will be heard the way they should have been heard."

Now Public Law 33-187, provisions under the new law will allow for abuse survivors to file civil suit against their abusers and the enablers, aiders and abettors of those abusers be they individuals or institutional entities.

The weeks leading up to the signing of Bill 326 saw an outpouring of support and opposition to the measure from lay and pastoral sources.

Archbishop Savio Hon Tai Fai, the apostolic administrator to the Agana archdiocese appointed in the absence of Archbishop Anthony Apuron, released a statement read at Mass on Sept. 18 asking parishioners to consider signing a petition to be delivered to the governor asking him to veto the bill. Apuron was put on leave in June by the Vatican amid accusations that the archbishop abused boys in the 1970s.

By Sept. 21, archdiocesan representatives delivered some 4,700 signatures to the office of the governor asking him to veto Bill 326.

Hon's argument was that lifting the statute of limitations would open the church to "unlimited financial liability" as a result of abuse survivors from decades past coming forward to make claims of sexual misconduct. The eventual result, according to church authorities, would be the closure of educational institutions and charitable services that operate out of church assets that the church would be forced to sell to pay their debts.

"One of the unforeseen side effects of the bill will be to erase the good work of those in the archdiocese who serve the neediest," read a segment of Hon's statement.

The immediate response to Hon's statement was ire and vitriol as lay leaders criticized Hon's concern for the church's material assets over the rights of abuse victims.

"The message for this morning is that those who oppose Bill 326 support Apuron's evil doings," said Lou Klitzkie of the Laity Forward Movement, a local reform organization, during protests held the morning Hon's statement was read.

Later that week, Hon was further criticized by members of a new organization that actually opposed the signing of Bill 326.

"I Familan Mangatoliku Siha Pari Si Apuron," or "Catholic Families for Apuron," was formed by Catholics who support Apuron and maintain his innocence until otherwise determined by a court of law.

Dr. Ricardo Eusebio, the president of Catholic Families for Apuron, blasted Hon for his lack of commitment to the opposition of Bill 326 and said that the apostolic administrator had failed to address the concerns of the bill prior to its passage in the senate.

Bill 326 was passed by a unanimous vote in the Senate on Sept. 13 following months of written and oral testimony largely in favor of the bill's passage.

Sen. Frank Blas Jr., the author of Bill 326-33, confirmed that he never once heard from any representative of the church for or against the passage of the bill.

In fact, out of the nine written and oral testimonies delivered to the legislative committee during public hearings for Bill 326, only one was in opposition to the passage of the bill.

In the end, despite numerous conversations and consultations with members of the church and the more than 4,500 signatures, Calvo opted to sign the bill into law.

The immediate response to the governor's signing of the bill was one of surprised gratuity. Joe Santos, founder of the sex abuse victims' advocacy group Silent No More, said that he was both elated and surprised to hear about Calvo's decision because he had heard that the governor was planning to veto the bill.

With the new law, Santos said that the Silent No More mission was completed and that he would finally be returning to private life.

Fr. Jeff San Nicolas, delegate to the apostolic administrator, said that he respectfully accepted the will of the people to lift the statute of limitations and assured everyone involved that he would be doing whatever was within his power to ensure cooperation.

Others were not so happy with the signing of the bill.

Eusebio stated that Catholic Families for Apuron was disappointed in the passage of the bill into law and explained how the legislation did not address core or root issues of child abuse.

"Bill 326, in addition to monetary restitution for all, could have been about the types of family support the government would have been able to provide for families identified to be at risk for child abuse," he said. "Instead, sadly, it focused on the perceived injustice of alleged victims of the Catholic church."

Further, Eusebio explained how the new law encouraged a bias against private institutions like the church because it fails to include provisions for civil litigation against the Guam government or its agencies for the same instances in which the church is now potentially liable.

[Neil Pang is a journalist in Hagatna, Guam.]

'We want the truth': Catholics hope for honesty in McCarrick report