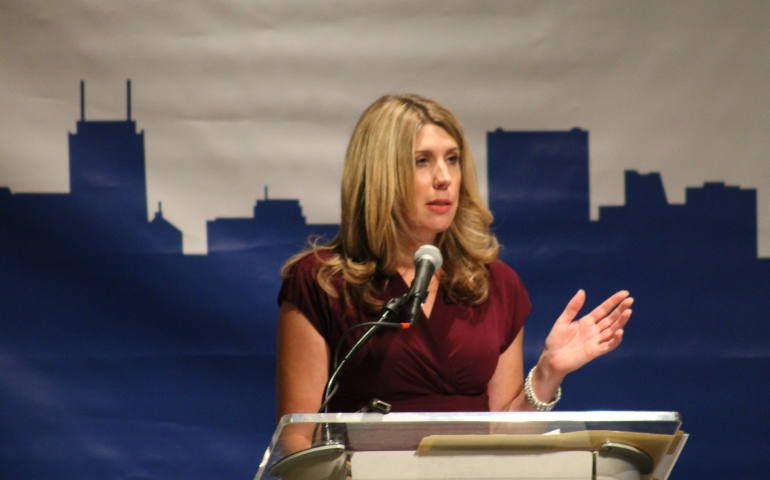 Chicago — Among a veritable “who’s who” list of speakers who played major roles in revealing the Catholic church’s clergy sexual abuse crisis, perhaps no one at the annual conference of the Survivors Network of those Abused by Priests last week generated as much anticipation as Jennifer Haselberger.

The former canonical chancellor for the St. Paul-Minneapolis archdiocese, Haselberger received a standing ovation before uttering a word. Other presenters -- who included Fr. Tom Doyle, former National Review Board member Illinois Justice Anne Burke, journalist Jason Berry and author Michael D’Antonio -- frequently referenced her role in exposing missteps and oversights in the archdiocese’s handling of abuse allegations, with one speaker even recapping portions of her dissertation.

But Haselberger opted not to use her time to delve into her April 2013 decision to resign, her experiences and frustrations in the Twin Cities, or the fallout that followed her disclosure of documents to Minnesota Public Radio and local authorities. Rather, she sought to offer a possible path forward for the church.

“I think it’s important not to just point out the problems but also to help try and articulate a solution,” she told NCR Saturday following her speech.

Haselbeger used as a starting pointing Pope Francis’ message in a July homily at a Mass during his meeting with abuse survivors, requesting the church make reparations for its crimes. “I ask for the grace to weep, the grace for the Church to weep and make reparation for her sons and daughters who betrayed their mission, who abused innocent persons,” the pope said.

Her decade of experience investigating and prosecuting cases of clergy sexual abuse, she said, led her to believe that both canonical and civil processes are incapable of accomplishing those results -- in that canonical processes are offender-oriented and designed to insulate rather than expose information, and that civil processes provide perpetrators and enablers little incentive to tell the truth.

“If it is our goal as a community of faith to demonstrate accountability for the crimes of sexual abuse by our clergy, as the Pope’s request to victims suggests, then we should not rely on either canonical processes or civil or criminal processes to guide us," she said in her speech. "Instead, we should look for a process that has acknowledgment, healing and reconciliation as it primary objectives.”

To her, that process is found within the work of Truth and Reconciliation Commission established in 1995 in post-apartheid South Africa. The commission’s goal, she said, was to restore dignity to victims of human rights violations during apartheid by confronting the ugliness of the nation's past in a public forum that applied a victims-centered approach, and would:

Haselberger highlighted that in seeking out information and victims’ testimonials, the commission went to the victims rather than having them come to it. Before the commission -- led by Archbishop Desmond Tutu -- concluded its work in 2002, it took testimony from 21,000 victims, with 2,000 appearing in public hearings. Victims were also encouraged to attend their perpetrators' amnesty hearings and ask questions.

In the church, she said “there is a very real need to similarly expose the number of lies circulating unchallenged … regarding its response to sexual abuse.”

Dismantling the current cultural narrative, through both survivor testimony and responses from clergy and bishops, would help foster understanding of the motives that led to abuse and the church’s response, Haselberger said. Doing so “is necessary in order to ensure such abuses of power do not continue,” she added.

Though she truly believes the implementation of such a commission would be the way forward, she admitted a similar process in the church was unlikely, largely because the church would realize it couldn’t indemnify its assets or its people.

“If we had bishops all of a sudden admitting to knowledge and actions, that would, in any kind of public forum, we’d never be able to prevent that from being used against them, which could lead to criminal prosecutions, civil liability, we just can’t control that,” she told NCR.

Still, she saw value in using the commission’s model as an intellectual exercise. Through self-reflection, all Catholics can examine what role they played, she said, though was careful not to accuse all of responsibility. In her own case, she recognized how she benefited from funds protected from lawsuits in the Twin Cities’ Catholic Community Foundation.

“I certainly understand the desires of donors to say I don’t want my money going to lawsuits, but if we look at the concept of reparation in the way the Holy Father wants us to, or seemingly wants us to from his statement, can we say that?

“Can we claim that paying, what in many cases are legitimate settlements to people who have been harmed, is not also part of the work of the church?” she said.