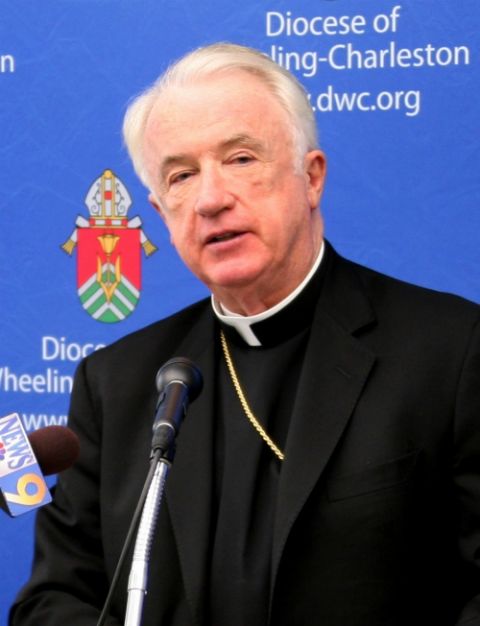 Bishop Michael Bransfield, then head of the Diocese of Wheeling-Charleston, West Virginia, is seen in a 2012 file photo. (CNS/Catholic Spirit/Tim Bishop)

A group called Lay Catholic Voices for Change has sent a letter to Bishop Mark Brennan of Wheeling-Charleston, West Virginia, asking that the diocese investigate charges of sex abuse of minors by former Bishop Michael Bransfield. The letter also asked that Bransfield be ordered not to use the title bishop emeritus to describe himself.

Bransfield served as bishop of Wheeling-Charleston, which includes the entire state of West Virginia, from 2005 to 2018. He retired after reaching the mandatory retirement age of 75. Information from a church investigation released in June of last year said he misused millions of dollars from diocesan funds and sexually harassed adult seminarians.

The investigation, completed under the supervision of Baltimore Archbishop William Lori, metropolitan for the region that includes West Virginia, said that accusations that Bransfield had abused minors were unable to be confirmed. But a section on allegations of sex abuse of minors, not made public, was published by The Washington Post late last year.

The letter to Brennan, who became bishop in West Virginia in August 2019, expressed disappointment in his handling of the alleged crimes of his predecessor. Lay Catholic Voices for Change, based in Morgantown, was formed by lay Catholics concerned about the allegations of financial and sexual impropriety leveled at Bransfield.

The letter said that the bishops have ignored their own recommendations in the Lori report.

"We impress that this report cannot go ignored, unheeded, and unimplemented," the letter said. "We impress that to ignore this Vatican-ordered, metropolitan-lead, and diocesan bishop-implemented report is to perpetuate the very system of abuse and cover-up plaguing our Church, is to further compromise the trustworthiness of our bishops, their conference, and our metropolitans to account for clergy abuse, and is to further compromise the faith of the Church in West Virginia and beyond."

The letter said that Bransfield, in public statements and private correspondence, continues to refer to himself as "bishop emeritus," a title that the Lori report asked be taken from him.

The letter also called upon the bishops to investigate a charge, made in 2007, that Bransfield had abused a minor in the 1970s while serving as a priest of the Philadelphia Archdiocese.

According to a Washington Post article, the church report declined to say that Bransfield abused minors in West Virginia, saying that such accusations, which Bransfield denies, remain unsubstantiated. The Post also reported on allegations that Bransfield inappropriately touched a 9-year-old girl at the National Shrine of the Immaculate Conception in Washington, where he was director before being named to the West Virginia diocese.

The Lay Catholic Voices for Change letter argues, "To ignore these findings (including by inaction), to cover-up these findings (by diverting attention away from them), and certainly to oppose these findings (by any actions to block the recommended inquiry) goes against stated Church 'zero tolerance' policy of … the Diocese of Wheeling-Charleston, the USCCB [U.S. Conference of Catholic Bishops], and the directives of the Holy See."

The group called upon the diocese to continue an investigation into accusations that Bransfield abused children serving as altar servers in West Virginia.

The letter, sent Feb. 20, was also sent to Lori and to the U.S. bishops' conference. As of March 9, there had been no formal reply.

But a statement from Brennan provided to NCR said that only the Vatican can strip Bransfield of the title of bishop emeritus. It said the charge of sexual abuse of minors against Bransfield "must be handled by civil law enforcement authorities."

The statement added that the diocese would cooperate in any such investigation.

'Listen to the heart of our people,' Sr. Teresa Maya tells US bishops