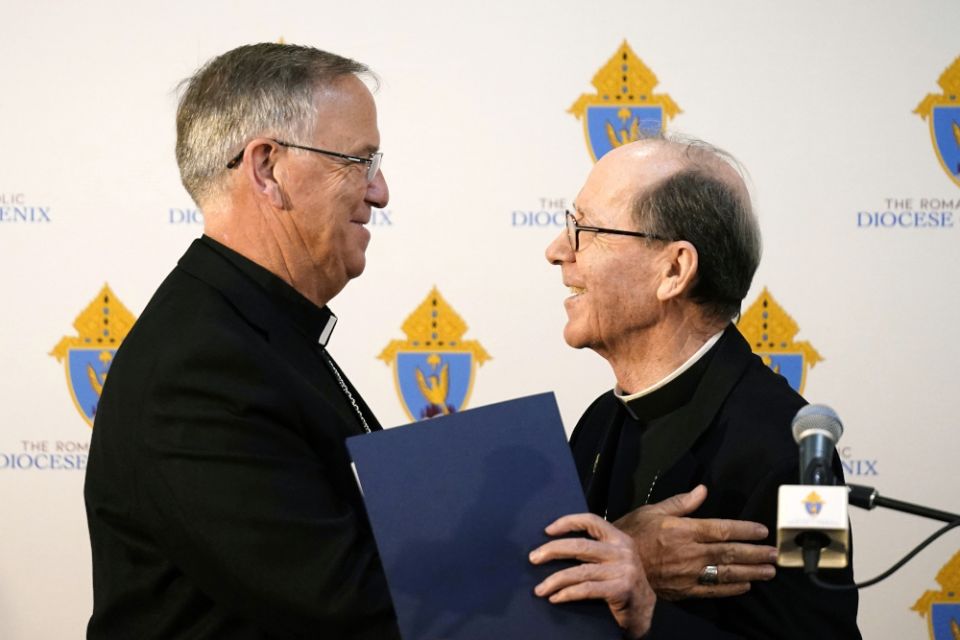 Bishop John Dolan, left, smiles along with retiring Bishop Thomas Olmsted as Dolan is introduced at a news conference after being named the new bishop for the Roman Catholic Diocese of Phoenix June 10 in Phoenix. (AP/Ross D. Franklin)

Phoenix — The next bishop of the Roman Catholic Diocese of Phoenix said June 10 that he will strive to be open when it comes to investigations of sex abuse, though he said he's not yet caught up on the status of abuse claims in a diocese that serves roughly 1.1 million Catholics.

"I honestly don't know what has occurred here. But yes, the goal here obviously is to be as transparent as we know — not as possible but as we know, what we know," Auxiliary Bishop John Dolan said at an introductory news conference.

The 60-year-old, who will be installed officially in August, will be only the fifth bishop in the diocese's 52-year history. He has been auxiliary bishop of the San Diego Diocese since April 2017.

His appointment comes as the Catholic Church continues to wrestle with sex abuse and cover-up scandals that have spanned the globe.

Current Bishop Thomas Olmsted submitted his resignation in January and it was recently accepted by Pope Francis. At 75, Olmsted had reached the age limit to serve.

In the mid-2000s, Olmsted spoke out about sexual abuse in the Catholic Church and started biannual Masses dedicated to survivors. In 2012, Olmstead publicly released a list of clergymen in the diocese who had committed sexual abuse.

The Survivors Network of those Abused by Priests, or SNAP, urged Dolan to live up to Catholic officials' previous promises of transparency.

"We hope that Bishop-elect Dolan will make the protection of children and the vulnerable his highest priority and we suggest immediate steps he can take when he is formally installed as bishop," the group said in a statement.

SNAP wants Dolan himself to audit every file of someone in the diocese accused of abuse. The group also is demanding he make sure a "woefully inadequate" list of "credibly accused" church personnel is up to date.

Dolan pointed to his experience in San Diego balancing the issue of "innocent until proven guilty" with reporting sex crime allegations. Diocese and church officials cooperated with investigations "to the joy of our district attorney there," he said.

"We even went beyond the laws in the state of California to make sure that every employee and even our volunteers understood the importance of ... being in a sense first responders and reporting to the diocese — basically going to the D.A. or to the police if they should have a case that comes forward," he said.

SNAP wants Dolan himself to audit every file of someone in the diocese accused of abuse. The group also is demanding he make sure a "woefully inadequate" list of "credibly accused" church personnel is up to date.

Dolan also briefly touched on immigration and his reputation as an LGBTQ-friendly bishop.

Living in San Diego, the incoming bishop has experience with parishes close to the U.S.-Mexico border. While the church respects a country's right to establish borders with security and protocol, Dolan said a person's immigration status will not determine whether they receive assistance or counsel.

Last year, Dolan was one of several U.S. bishops who signed a letter condemning bullying of LBGTQ youth, according to Religion News Service. He also has spent a great deal of time with a parish in San Diego's predominantly gay Hillcrest neighborhood. But he stopped short of calling himself an advocate.

"I'm a person who really likes to dialogue rather than shut things down," Nolan said. "I think we are better at church when we have an open heart."

The Diocese of Phoenix covers about half of Arizona, with other parts of the state included in the Tucson and Gallup, New Mexico, dioceses.

The diocese made headlines in February when it came to light that a Phoenix priest had flubbed the wording of baptisms for years. Thousands of baptisms presumed invalid would have to be redone.

Faith in the streets