Pope and Canadian Indigenous: 'Sorry' must fit the level of suffering 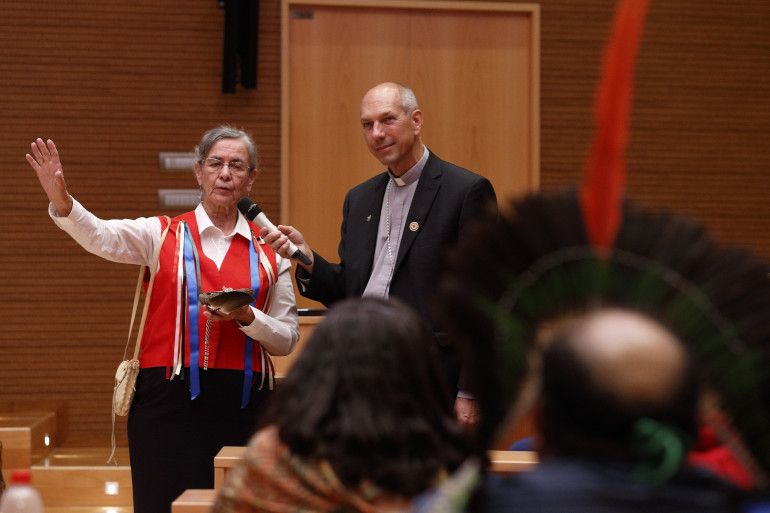 Archbishop Donald J. Bolen of Regina, Saskatchewan, is pictured with Sister Priscilla Soloman, a member of the Ojibway people and of the Sisters of St. Joseph of Sault Ste. Marie, during a prayer ceremony in Rome in this Oct. 17, 2019, file photo. (CNS photo/Paul Haring)

Vatican City — Pope Francis seems to have no trouble using the word "sorry" and recommending others use it often.

Then why, people wondered, did he not use the word when speaking about the horrific discovery of the remains of as many as 215 children in unmarked graves at a Catholic-run school for Indigenous children in Canada?

Francis did express his condolences and sorrow June 6, recognizing the discovery brought up the traumas of the past when the Canadian government policy was to send Indigenous children to residential schools as part of a mistaken effort at assimilation. Catholic religious orders ran most of those schools, and stories of abuse are rampant.

But the pope's remarks in early June were a far cry from what the Canadian Truth and Reconciliation Commission's Call to Action called for in 2015:

"We call upon the pope to issue an apology to survivors, their families and communities for the Roman Catholic Church's role in the spiritual, cultural, emotional, physical and sexual abuse of First Nations, Inuit and Métis children in Catholic-run residential schools. We call for that apology to be similar to the 2010 apology issued to Irish victims of abuse and to occur within one year of the issuing of this report and to be delivered by the pope in Canada."

Canadian Cardinal Michael Czerny, who had had a meeting with the pope June 5, was asked about what the pope said after his Sunday Angelus talk and why an apology was not part of it.

The cardinal told CTV Edmonton that he thought the pope did not use the occasion to apologize because, yes, it would have been "a spontaneous moment, but if it's not well prepared, if we are not ready to receive it -- more than to receive it, to live it" -- then it would not make a difference. Instead, "it is something that should change our lives."

Archbishop Donald Bolen of Regina, Saskatchewan, said he believes the pope was "telling the leadership of the church in Canada" that the first step must be for them "to engage directly with Indigenous peoples, that we need to work with them, to listen to them, to accompany them, to apologize where appropriate, to make amends where that is asked for, and to find ways to walk together."

The pope, he told Catholic News Service June 10, wants the bishops "to be very honest about the past," including "our sins and our terrible mistakes."

"He invites us to cultivate a penitential memory, to encourage people who have been wounded to speak about the past and never to ask them to suppress it," he said.

General expressions of sorrow and regret can be important, but they are no substitute for standing before the injured person and his or her family, acknowledging failure and requesting forgiveness.

Bolen said that the Indigenous people he has spoken with have differing opinions about inviting Francis to Canada, even though in the Canadian media there is a "clarion call."

But, he said, for many members of the First Nations, Inuit and Métis communities, it is essential.

First, of all, he said, "most Indigenous people, especially Indigenous Catholics, see the pope as the chief," and "when there is a wound between families, the fathers are engaged in the reconciliation process."

So, he said, many Indigenous Canadians are looking to the pope "to be connected, to take some ownership and to speak on behalf of the church."

Asking the pope to make the apology formally on Canadian soil is not an arbitrary request, the archbishop said. "The land is so central to Indigenous spirituality, to meet people on their land is vital in terms of a relationship."

An initial step should take place before the end of the year.

The Canadian Conference of Catholic Bishops announced June 10 that a delegation of "Elders/Knowledge Keepers, residential school survivors and youth from across the country" representing First Nations, Inuit and Métis communities is preparing to travel to the Vatican. The trip originally was scheduled for last year but was postponed because of the COVID-19 pandemic.

The pope, Bolen said, will be able to listen to their stories and hear, in person, what they need from him and the church.

It will not be enough, he said, but it is an important step.

Already in 2009, Pope Benedict XVI met with representatives of Canada's First Nations, expressed his sorrow for the suffering of Indigenous children over decades in the church-run residential schools. But he did so privately. The Vatican press office later put out a statement and the representatives spoke to the press, but the apology was not public.

Archbishop Luigi Bonazzi, who was then-nuncio to Canada, said in 2016 that Francis was considering a visit to Canada to make the apology. Then nothing more was said. Papal visits require an invitation both from the government and from the national bishops' conference.

Since the news broke about the remains of children found at the Kamloops school, the Canadian bishops have not had a chance to meet. But, Bolen said, "I think there's a greater awareness now than there has ever been of the waves of suffering, which flowed from the residential schools."

"The intergenerational trauma and legacy, the negative experience at those schools is very visible right now," he said. "Right now, it's very raw."

Accountability | Pope and Canadian Indigenous: 'Sorry' must fit the level of suffering

Did the pope say Lutherans can take Communion at Catholic Mass?

Eliminating any difference between sexes 'is not right,' pope says