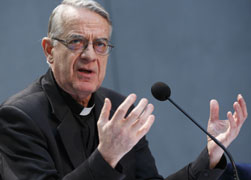 VATICAN CITY -- In his letter to Irish Catholics, Pope Benedict XVI promised to meet victims of clerical sexual abuse, but the Vatican said it would not turn such a meeting into a media event.

Like similar meetings the pope has had with victims in the United States and in Australia, a potential meeting with Irish victims would occur quietly and in an atmosphere of prayer without a public announcement ahead of time, said Jesuit Father Federico Lombardi, Vatican spokesman.

"For the pope, these are not media events. They are human and spiritual encounters. While they are significant, you should not expect them to be announced and propagandized," Father Lombardi told reporters March 20 during a briefing on the pope's letter.

The spokesman also announced that the Vatican had opened on its Web site a new page -- http://www.vatican.va/resources/index_en.htm# -- with the text of the pope's letter, past papal speeches touching on sexual abuse and related documents.

Directly addressing victims in his letter, Pope Benedict wrote, "I humbly ask you to consider what I have said."

Father Lombardi said the pope's words make it clear that he understands their hurt and how hard it could be for them to trust church leaders. He said the pope is not acting as "a teacher trying to impose a lesson," but is asking for a chance to apologize on behalf of the church and help promote healing.

The release of the pope's letter to Irish Catholics came in the midst of new revelations about clerical sexual abuse of minors in Germany, Austria, the Netherlands and Switzerland.

Asked why the pope did not use the opportunity to address clerical sexual abuse globally, Father Lombardi said Pope Benedict wanted to speak directly to Irish Catholics as they deal with a series of cases that have been the object of two separate independent inquiries and very public reflection by the bishops' conference as a whole.

"Obviously, the way the pope addresses the victims, the guilty or the bishops" in the Irish letter is applicable beyond Ireland, Father Lombardi said. But this letter was meant to be pastoral and specific, and an attempt to address the global situation risked making the document "generic, banal or 250-pages long," he said.

In the letter, Pope Benedict announced "an apostolic visitation of certain dioceses in Ireland, as well as seminaries and religious congregations."

Father Lombardi said details about who will be in charge of the visitation, what dioceses will be visited and the precise scope and timetable for the visitation would be announced in the future.

He said, however, that a visitation usually indicates church leaders believe there is a situation "in which it seems local governance has been inadequate."

Asked about Pope Benedict's responsibility for the way the church has handled sex abuse allegations, particularly when he was head of the Congregation for the Doctrine of the Faith, Father Lombardi said the pope was "a model of the search for coherence."

His term as prefect of the doctrinal congregation was "a time not of covering up or hiding the issue, but of an increasingly clear and decisive commitment to bringing them to light and dealing with them," Father Lombardi said.

Money paved way for Maciel's influence in the Vatican

Report: Former US ambassador to Vatican investigated for sexual harassment