Retired Washington cardinal out of ministry after credible abuse allegation 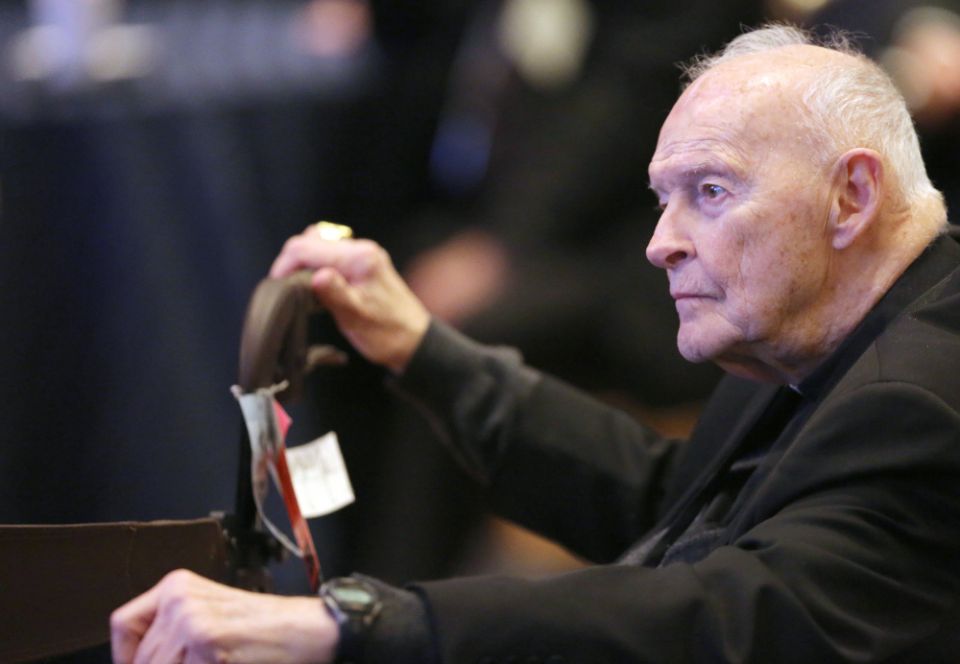 Cardinal Theodore E. McCarrick, retired archbishop of Washington, listens during a Nov. 12, 2017, presentation in Baltimore on the centenary of the U.S. Conference of Catholic Bishops. (CNS/Bob Roller)

Editor's note: This story was updated at 11:45 a.m. Central time to clarify that Cardinal Theodore McCarrick was not the first cardinal to be removed from ministry amid abuse allegations.

In a shocking announcement, Cardinal Theodore McCarrick, who served as the archbishop of Newark, New Jersey, and Washington, D.C., before retiring in 2006, has announced that he is stepping down from active ministry after allegations of sexual abuse were found "credible and substantiated."

"The Vatican Secretary of State, Cardinal Pietro Parolin, at the direction of Pope Francis, has instructed Cardinal McCarrick that he is no longer to exercise publicly his priestly ministry," according to a statement from Cardinal Timothy Dolan of the New York Archdiocese where the complaint was lodged.

Dolan was appointed by the Vatican to oversee the investigation, according to a statement from the Washington Archdiocese. "The Holy See, which has exclusive authority in the oversight of a cardinal, delegated Cardinal Timothy Dolan of New York to investigate the allegation, engaging the review board of the Archdiocese of New York," the statement said.

"I realize this painful development will shock my many friends, family members, and people I have been honored to serve in my sixty-years as a priest," McCarrick said in a statement.

The incident of sexual abuse of a teenager occurred about 50 years ago, when McCarrick was a priest of the Archdiocese of New York, Dolan's statement said. No other details about the allegations were given.

Three other allegations of sexual misconduct with adults in the Archdiocese of Newark and the Diocese of Metuchen, New Jersey, were revealed in a statement by Cardinal Joseph Tobin of Newark. Two of those allegations resulted in settlements.

According to Dolan's statement, the allegation was the first violation of the "Charter for the Protection of Children and Young People" made against McCarrick. When McCarrick learned of the New York allegation a few months ago from Dolan, he said he was shocked and maintained his innocence.

"Carefully following the process detailed by the Charter of the American bishops, this allegation was turned over to law enforcement officials, and was then thoroughly investigated by an independent forensic agency," Dolan's statement said. "Cardinal McCarrick was advised of the charge, and, while maintaining his innocence, fully cooperated in the investigation. The Holy See was alerted as well, and encouraged us to continue the process."

According to the statement, the allegation was determined to be "credible and substantiated."

"In obedience I accept the decision of The Holy See, that I no longer exercise any public ministry," McCarrick said in his statement.

Tobin noted that McCarrick served the Archdiocese of Newark for 15 years, from 1986-2000. “No doubt many of you developed strong relationships with him and appreciate the impact of his service,” he wrote in a statement.

But Tobin insisted that the church must “act with vigilance” on the issue of sexual abuse. “While Cardinal McCarrick maintains his innocence and the canonical process continues, we must put first the serious nature of this matter with respect and support for the process aimed at hearing victims and finding truth,” he said.

Bishop James Checchio of Metuchen — where McCarrick served as the first bishop of the diocese from 1981-1986 — apologized to the victim and encouraged anyone abused by clergy to report it to the police.

“I want all victims to know that they are always in my prayers, and I ask everyone in the Diocese to join with me in praying that the Lord will bring them courage, healing and consolation,” he said in a statement.

Dolan thanked the victim for coming forward. “We hope this can bring a sense of resolution and fairness,” he said in a statement.

McCarrick is the second cardinal to be removed from public ministry amid allegations of sexual abuse of minors. Catholic News Service reported that Austrian Cardinal Hans Hermann Groer, who died in 2003, was asked by Pope John Paul II in 1998 to give up his public duties after allegations.

In the statement, McCarrick apologized to the victim.

"While I have absolutely no recollection of this reported abuse, and believe in my innocence, I am sorry for the pain the person who brought the charges has gone through, as well as for the scandal such charges cause our people," the statement said.

Editor's note: This story will continue to be updated.

A version of this story appeared in the June 29-July 12, 2018 print issue under the headline: Cardinal out of ministry after allegations .