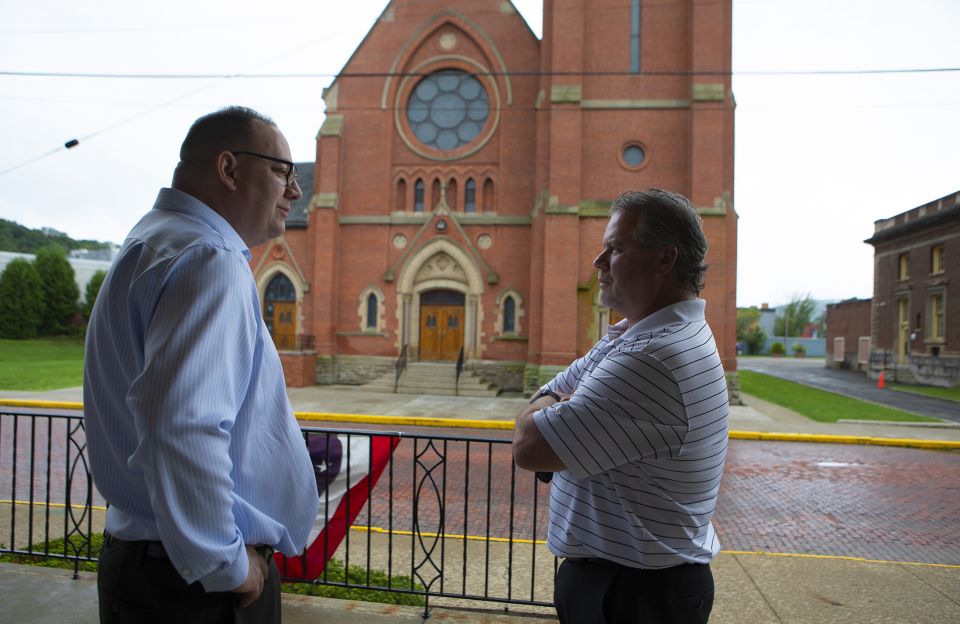 Pittsburgh resident Jim VanSickle, left, who told a Pennsylvania grand jury that he was molested by a priest when he was a teenager, speaks with former high school classmate Jack Rae of Bradford, Pa., during an Aug. 21 visit to his boyhood parish, St. Bernard Catholic Church in Bradford. (CNS/Chaz Muth)

Pittsburgh — Pennsylvania survivors of clergy sex abuse spent the week after the release of the grand jury report finding their voice as bishops and priests in the state wrestled with how to address the growing scandal.

Several of the survivors traveled around the state to speak publicly about their victimization at the hands of predator priests, many of whom said their "coming out" is liberating them from decades of shame.

Ed Rodgers of Bradford said he found the courage to re-emerge more than 20 years after he accused a priest of molesting him as a youth.

Though Rodgers, now 45, said he was publicly shamed by the Diocese of Erie, lay Catholics in his hometown and the state legal system in the late 1990s, he said a recent scathing grand jury report inspired him to break his silence.

A Pennsylvania grand jury report released Aug. 14 detailed more than 1,000 claims of sex abuse in six dioceses in the state going back 70 years and identified 301 priests and church workers who may have committed the crimes. The report also singled out some bishops for their improper handling of accused abusers.

Rodgers, who spoke with reporters in front of Bradford's St. Bernard Catholic Church Aug. 21, had plenty of company from others in the state who say they were sexually abused by priests.

Many of them gathered with members of the Survivors Network of those Abused by Priests, better known as SNAP, in front of diocesan buildings throughout Pennsylvania beginning Aug. 20, telling their stories, demanding changes in the statute of limitation laws, and calling for accountability from bishops and the church.

Reaction by church officials was different from diocese to diocese.

The Aug. 20 SNAP news conference at the Diocese of Pittsburgh was tense, angry and confrontational, while the Aug. 21 event at the Diocese of Erie was congenial, with gratitude expressed by the survivors who organized it.

As news camera operators jockeyed for position on the crammed Pittsburgh sidewalk to hear the survivors' testimonials, a priest who works for diocese came out of the building to listen to the speakers.

The priest's presence angered a few survivors who called Pittsburgh Bishop David Zubik a "coward" for not coming out himself.

While some of the survivors engaged in respectful dialogue with Msgr. Ron Lengwin, vicar for church relations for the Diocese of Pittsburgh, others began to shout, and the scene digressed into an anger-charged event laced with profanity.

By contrast, when the same group of survivors and SNAP organizers arrived at the Diocese of Erie the next day, they were greeted by Bishop Lawrence Persico, who invited them to move their news conference from the sidewalk along the street, which is a good distance from the front of the building, onto the diocesan headquarters property.

When the SNAP organizers said they were not allowed onto church property, Persico assured them it was within his power to grant them permission, at which time they appreciatively accepted the invitation.

Though the survivors still made demands and called for the church not to lobby against a change in the statute of limitations laws, the tone was in striking contrast to the event in Pittsburgh and organizers told members of the media they appreciated the bishop's presence.

"I'm quite surprised," said Judy Jones, SNAP Midwest regional leader. "I have done press events in many dioceses all over the country and he is the first bishop I have ever met."

About an hour before the event began, Persico told Catholic News Service he wanted to go out and listen and his only hesitation was that he didn't want his presence to overshadow what the survivors came there to say.

Ultimately, he opted to personally let the group know they were welcomed and that he was listening, which he said he thought was important for them and for the Catholic Church.

Though Persico acknowledged the institution was reeling from the blow of the grand jury report, he said it was self-inflicted wound and that it was a moral obligation of church leaders to not only do penance for these sins, they needed to begin the healing process by listening to all of those who are suffering.

Following the event, Persico had a private meeting with Pittsburgh resident Jim VanSickle, who has accused a former teacher at Bradford Central Christian High School, Fr. David Poulson, of molesting him in the late 1970s.

Poulson was charged last May with indecent assault, endangering the welfare of children and corruption of minors, stemming from an accusation from two boys.

Like most of the survivors who testified before the grand jury, VanSickle is prevented from filing charges or bringing a lawsuit, because his accusations are nearly four decades old.

Though he had told his parents and wife about an incident involving Poulson many years ago, he didn't speak out publicly until the priest's arrest earlier this year.

"Before I started to speak out, I told my wife, 'If I do this, I'm doing it all of the way," he told CNS. "She understood that meant media coverage and relinquishing our privacy. She was supportive, like she always is, and encouraged me to do it."

VanSickle has given countless national media interviews since the grand jury report was released and has become a very public advocate to change Pennsylvania law to allow survivors to file charges and bring civil suits against their assailants decades later.

"It took me decades to come to terms with what happened to me, and I'm being punished for that with the statute of limitations, meaning, I won't get my day in court," he said.

Though his public crusade has drawn both praise and criticism, Trish VanSickle said it's been cleansing and therapeutic for her husband, who was prone to erratic mood swings and outbursts before he came to terms with what had happened to him.

Though people are often afraid to come forward about such abuse at the hands of predator priests, they usually find tremendous relief once they do, said Fr. Raymond Gramata, pastor at VanSickle's boyhood parish, St. Bernard Catholic Church in Bradford.

The #MeToo movement, a social media campaign that has emboldened women to call out sexual abuse and harassment without being publicly shamed for it, has made the current climate easier for those abused by priests to come forward with less fear of repercussions, Persico said.

In the past it wasn't unusual for accusers to be publicly shamed by parishioners who rallied behind their beloved priest, questioning their honesty and motives for coming forward, he said.

"We have to stop that kind of shaming," Gramata said, "or else there can be no healing. The people who were harmed and damaged can't heal if that happens and the church can't heal either.

"We can't continue to sweep this under the carpet," he said. "We need to air this out and deal with it. Trust me, everyone needs to heal from this."

Accountability | As survivors find voice, church leaders wrestle with how to address issue

Archdiocese of Santa Fe to file for Chapter 11 bankruptcy protection

Advocate for those abused by priests seek state police probe