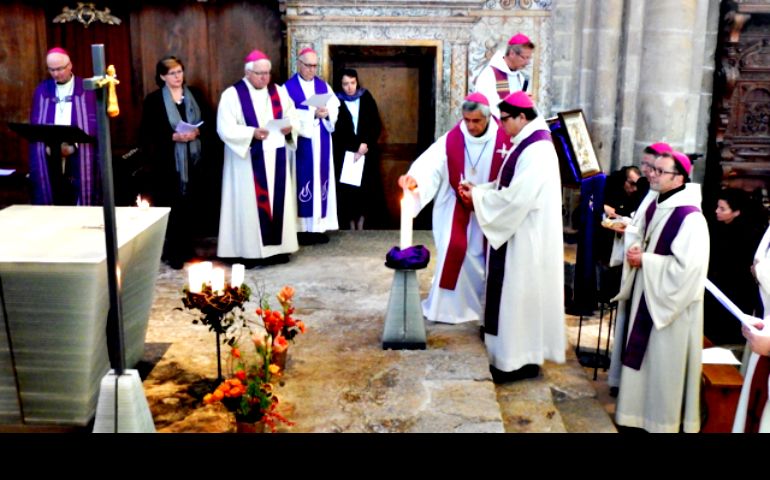 The Swiss bishops, religious superiors and a delegation of victims of clergy sex abuse participate in a penitential service at Valère Basilica in Sion, Switzerland, Dec. 5. (Courtesy of the Swiss Bishops' Conference)

The Swiss Bishops' Conference has set up a special compensation fund for victims of clergy sexual abuse whose cases are barred by statute of limitations.

Victims who were abused years ago and whose cases, according to both state and church law, fall under the statute of limitations were particularly distressing for the Swiss bishops, Lausanne Bishop Charles Morerod told the press Dec. 5 in Sion, Switzerland.

"For far too long, the church turned a blind eye on these victims who are in a particularly difficult situation and have not been provided with any reparation," Morerod, president of the Swiss Bishops' Conference, said. The conference decided to create a fund for those victims who no longer had the right to seek redress in court.

The bishops put aside an initial sum of 500,000 Swiss francs (US$493,500) for the special fund. All Swiss dioceses, the Union of Religious Major Superiors of Switzerland, and other church organizations in the country are contributing to the fund. An independent commission has been set up to decide on the amount of compensation each victim should receive, Morerod said.

Many of the recorded cases dated back to the 1950s but the Swiss bishops and religious superiors said they continue to be grateful for every report of sexual abuse by clergy or church employees. They called on victims to keep coming forward, deserving justice even if the abuse occurred long ago.

Before the press conference, all 11 members of the bishops' conference, representatives of the religious superiors group, and a delegation of victims gathered at Valère Basilica in Sion for a penitential service. The 12th-century basilica, which is situated on a hill, has been a place of pilgrimage "which people have brought their burdens and troubles to for centuries," Morerod said.

He added that "zero tolerance" and "complete transparency" were called for as far as clergy sexual abuse was concerned. He thanked the public for pressuring the church regarding the abuse.

One of the victims at the service, a woman in her 50s, came forward and related her life story in a broken voice. Her father had been a priest and she had four half-siblings who all had different mothers. The bishops and religious superiors joined her in saying, "We pray that clergy sexual abuse may never again be swept under the carpet, belittled or relativized."

The bishops then knelt and, led by Morerod, prayed, "A grievous sin committed by individual members of the church but facilitated by certain patterns of behavior and thinking in the church has come to light. The sin has several levels: the abusive act, the complicit silence and the failure to render assistance to the victims. We feel responsible and thank the victims for opening our eyes."

The Swiss bishops' conference updated its sexual abuse guidelines for the third time in 2014. They now include religious groups and activities not previously under the responsibility of the dioceses. New church employees have to undergo a check of their criminal record. The new guidelines also aim to ensure better transparency when priests are moved from one diocese to another.

No longer administrator, how might Hebda change as Twin Cities archbishop?

Abuse that stretched to Atlanta among reports emerging in Buffalo