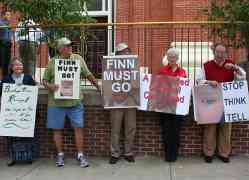 Catholics outside the Kansas City cathedral calling on Bishop Finn to resign. (Photo by Jaratsri Piewklieng)

About 15 people joined the leaders of the National Survivor Advocates Coalition on Sunday in a public square three blocks from the diocesan cathedral for a demonstration calling for Finn's resignation.
{C}
"A criminally convicted bishop cannot lead. Bishop Finn should resign or be removed," said Kristine Ward, chair of the coalition, on the steps of Barney Allis Plaza in downtown Kansas City.

Ward, who is from Dayton, Ohio, said the leaders of the coalition came to Kansas City to be in solidarity with local Catholics and urge them to action.

"The courts have acted and now must the church," Ward said. "The moral issue of a criminally convicted bishop who sits as chief teacher in the diocese must be confronted head on."

Local pressure is essential to ensure that Finn does not remain in office, she said. "Lay Catholics must act like their lives depend on it -- because the lives of children do. Priests [of the Kansas City-St. Joseph diocese] must stop saying they don't know what to do," Ward said, adding that "now is not the time for complacency."

Finn's conviction, the first time a U.S. bishop has been criminally charged in the decades-long clergy sex abuse crisis, is a local issue with national and international implications, Ward said.

"This is a watershed moment in the excruciatingly long crisis in the church," Ward said. "Here in this Midwestern city, here in the middle of the country, the legal and moral issues of child pornography and child sexual abuse have intersected here and the point of intersection is the bishop's chair."

Finn's conviction stems from the case of Fr. Shawn Ratigan, a diocesan priest who in August pleaded guilty in federal court to charges of production and possession of child pornography.

While Finn has acknowledged he knew as early as December 2010 that lewd photographs of young girls had been found on Ratigan's computer, he has admitted that neither he nor the diocese formally reported the photographs to authorities until May 2011.

During the trial, Finn also acknowledged that he is a mandatory reporter for suspected child abuse under Missouri law.

Ratigan is awaiting sentencing in federal court. He is also facing child pornography charges pending in Clay County, Mo., the location of the parish where he last served as pastor.

The demonstrators marched to Kansas City's Cathedral of the Immaculate Conception carrying signs that read: "A convicted criminal can't lead," "Finn is Finished" and "Prove you are sorry: Resign."

Three Catholics who support Finn and do not want him to resign stood on the cathedral steps holding their own signs: "We stand by Bishop Finn," "We pray for unity," "Woe to those against Bishop Finn."

"The courts found him guilty of a misdemeanor, which I understand is not that serious of an offense," Bill Fitzgibbons said. To ask the bishop to resign over a misdemeanor "seems a bit unusual to me," he said.

Tessa Hatler said that Finn was "falsely accused and falsely convicted." He is "very innocent" she said, "but he is the man who takes the fall."

Ward also announced that the National Survivor Advocates Coalition has formed a local affiliate in Missouri, which will be coordinated by Annette Hodges of Sedalia, Mo.

Who are the three bishops under Vatican review for sex abuse?