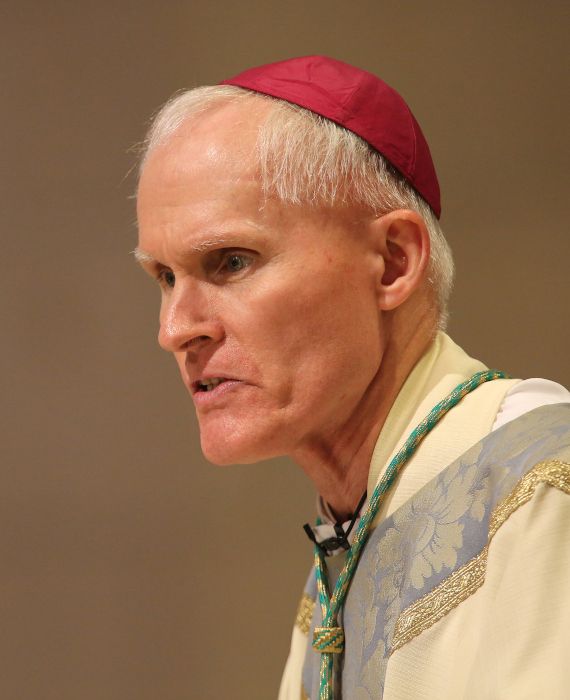 Bishop Mark E. Brennan of Wheeling-Charleston, W.Va., in an Oct. 31, 2019, letter to Catholics in the state, said he is working to have his predecessor, retired Bishop Michael J. Bransfield, "make amends for harm he caused during his tenure" as mandated by Pope Francis. Bishop Brennan is pictured during his installation Mass Aug. 22 in the Cathedral of St. Joseph in Wheeling. (CNS/Bob Roller)

Wheeling, W.Va. — Bishop Mark E. Brennan of Wheeling-Charleston told Catholics in the statewide diocese he was working to have his predecessor "make amends for harm he caused during his tenure" as mandated by Pope Francis.

The announcement regarding retired Bishop Michael J. Bransfield came in an Oct. 31 letter to West Virginia Catholics on letterhead from the bishop's office.

The brief letter expressed how Brennan was "dismayed by the continued revelations concerning former Bishop Michael Bransfield's misdeeds, as confirmed by the penalties which the Holy Father has imposed on him" and detailed in media reports.

When Pope Francis accepted Bransfield's resignation Sept. 13, 2018, he left under a cloud of allegations of sexual and financial misconduct. Subsequent media reports during the last 13 months have detailed some of the alleged activity in detail.

Francis announced in July disciplinary actions Bishop Bransfield, prohibiting him from living in the Diocese of Wheeling-Charleston and from presiding or participating anywhere in any public celebration of the liturgy.

As part of those disciplinary actions, a communique from the apostolic nunciature in Washington posted on the diocesan website in July also said Bransfield would be obligated "to make personal amends for some of the harm he caused; the nature and extent of the amends to be decided in consultation with the future bishop of the Wheeling-Charleston."

Brennan wrote, "It is my highest priority to restore trust in church leadership and bring about healing that so many in our diocese need and desire."

The bishop said he hoped to soon "communicate to the Holy Father and to the faithful of the diocese a plan for Bishop Bransfield's amends."

"While it is not possible to undo all the hurt and disappointment his actions have caused, I believe it is necessary for Bishop Bransfield to accept his moral responsibility and make a fair restitution to the people of the diocese, for whom he was responsible as bishop," the letter said.

Brennan was an auxiliary bishop in the Archdiocese of Baltimore prior to his July 23 appointment to West Virginia. He was installed in the Wheeling-Charleston Diocese Aug. 22, acknowledging during the ceremony that "the scandals we have learned about have caused painful disappointment, confusion, anger and distrust of church leaders."

He pledged to "face that situation with open eyes and determined spirits to bring about true and lasting change."

Black Catholics' history: Will US Catholic schools teach it?

CARA study finds bishops are satisfied with their life and ministry