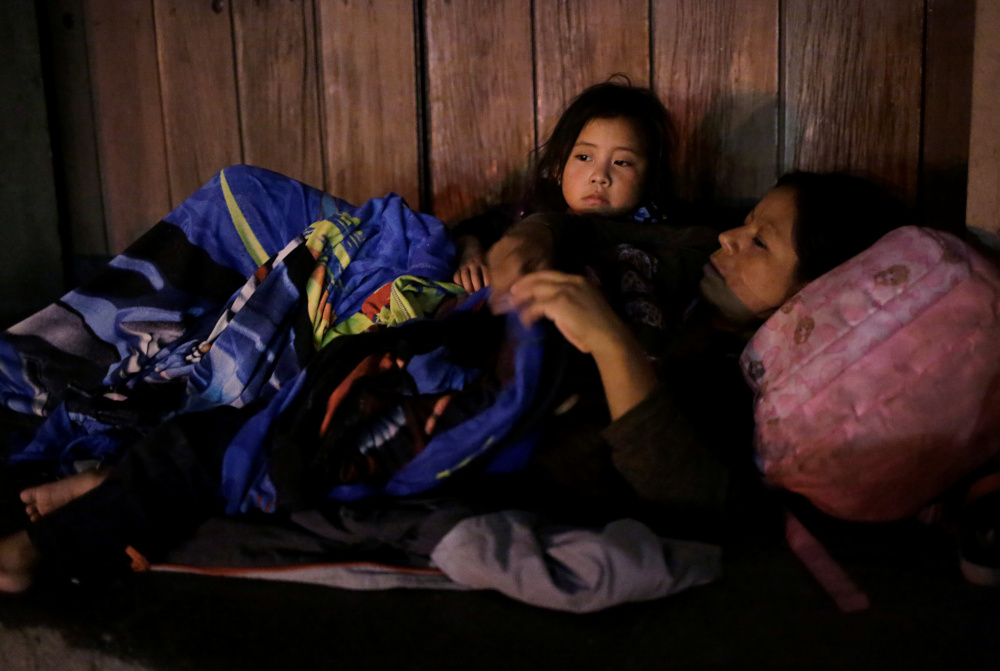 A migrant and her daughter rest outside Our Lady of Guadalupe Cathedral in Ciudad Juarez, Mexico, July 14, 2019. As part of the legal proceedings under a new policy established by the U.S. government, they were returned to Mexico from the United States to await their court hearing for asylum. (CNS/Reuters/Jose Luis Gonzalez)

The Trump administration announced the U.S. departments of Justice and Homeland Security are adopting an interim "third country rule" requiring immigrants seeking asylum at the U.S.-Mexico border to first apply for refugee status in another country.

News that the rule was taking effect July 16 brought quick condemnation by Catholic and other immigrant advocates, including the president of the U.S. Conference of Catholic Bishops, Cardinal Daniel DiNardo of Galveston-Houston.

He called the new rule "drastically" limiting asylum "unacceptable," especially because it comes on the heels of the "misguided and untenable" actions by the U.S. Immigration and Customs Enforcement to carrying out deportation orders for some immigrants.

"It is contrary to American and Christian values to attempt to prevent people from migrating here when they are fleeing to save their lives and to find safety for their families," DiNardo said in a July 16 statement.

ICE enforcement actions are creating fear in immigrant communities and now added to "to this climate of fear" is the administration's "further unacceptable action to undermine the ability of individuals and families to seek protection in the United States."

"The rule adds further barriers to asylum-seekers' ability to access life-saving protection, shirks our moral duty, and will prevent the United States from taking its usual leading role in the international community as a provider of asylum protection," the cardinal continued. "Further, while still reviewing the rule, initial analysis raises serious questions about its legality."

He urged President Donald Trump "to reconsider these actions, the new rule and its enforcement-only approach."

"I ask that persons fleeing for their lives be permitted to seek refuge in the U.S. and all those facing removal proceedings be afforded due process. All who are at or within our borders should be treated with compassion and dignity," DiNardo added.

Other reaction to the third-country asylum rule included a statement from including Christopher Kerr, executive director of the Ignatian Solidarity Network.

"Yesterday, Catholics around the world attending Mass heard the 'Parable of the Good Samaritan' and a message of love for one’s neighbor proclaimed in the Gospel," Kerr said July 15. "Today, our nation awoke to the news of the president of the United States seeking to shut off access to safety and refuge for Central American families facing horrific violence, repression and poverty in their home countries."

"This is not the act of a good Samaritan – instead it is an effort that does not honor the inherent dignity of those seeking asylum in our country," Kerr said.

The rule will not only have "a profound impact on Central Americans facing poverty and gang violence" but also will affect people from many other countries fleeing religious persecution and other forms of abuse," he said.

"Asylum is an internationally recognized life-saving process that is firmly embedded in U.S. law and history," said Anna Gallagher, executive director of the Catholic Legal Immigration Network Inc. "Attempting to subvert this process is a betrayal of American history and our legal system. Asylum-seekers need our protection, not another door slammed in their faces."

Gallagher's comments were included in a joint news release of reaction from several faith groups issues late July 15 by the Interfaith Immigration Coalition.

"As Pope Francis said last week in his return to the immigrant-receiving island of Lampedusa, we are called to be, as Scripture asks, 'those angels, ascending and descending, taking under our wings the little ones, the lame, the sick, those excluded.' Our call to care for others doesn't get much plainer than that," Gallagher added.

Kathryn Johnson, policy advocacy coordinator with the American Friends Service Committee, said that at a time of "multiple refugee crises across the world, the United States should be expanding U.S. protection for refugees, asylum-seekers and others seeking safety and taking in more of the world’s persecuted people."

"Instead, she added, "this administration is shamefully putting more refugees' lives in danger through this and other attacks on our asylum system."

The new rule, being published in the Federal Register, says that "an alien who enters or attempts to enter the United States across the southern border after failing to apply for protection in a third country outside the alien's country of citizenship, nationality, or last lawful habitual residence through which the alien transited en route to the United States is ineligible for asylum."

A version of this story appeared in the July 26-Aug 8, 2019 print issue under the headline: 'Third-country rule' restricts eligibility for asylum-seekers.