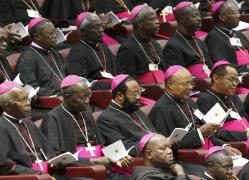 Bishops attend a session of the Synod of Bishops for Africa at the Vatican Oct. 6. (CNS photo/Paul Haring)

Generally speaking, Catholic debate outside of Europe and the United States is usually distinguished by its ad extra orientation, meaning that the focus is not so much insider Catholic baseball but rather the burning challenges of the broader society, and how the Catholic church can be an agent for change.

What seems to be emerging at the Oct. 4-25 Synod for Africa, however, is a conviction that for the Catholic church to be helpful in Africa ad extra, it first has some ad intra business to resolve.

Though the synod is only on its fourth working day, already a variety of speakers have suggested that various aspects of the church's internal culture handicap its effectiveness as an instrument of reconciliation, justice and peace. This critique -- which has surfaced from some surprising sources, including a prominent Vatican official -- seems to suggest that the Synod for Africa may have something to say not just about the mote in the world's eye, but also the beam in the church's own.

To be sure, the ideas being floated at the Synod for Africa are not the usual fare for Catholic reformers in the West, who often focus on the church's teaching on sexual morality or deconstructing the authority of the papacy. Instead, the African reform package includes:

The point about tribalism rearing its head inside the church has been made repeatedly, by speakers representing different regions and different points of view -- enough to suggest that it's not merely a localized or occasional problem.

Maronite Bishop Francois Eid of Egypt, for example, argued yesterday that the church needs to devote greater efforts to the formation of priests -- pointedly making it clear, he said, that "their mission should not be considered as the place for a competition of personal, family or tribal interests."

Bishop Francisco João Silota, a member of the Missionaries of Africa in Mozambique, urged Africans to confront "ethnic, tribal and regional discrimination that reigns at the heart of your societies, but also in the church."

Cardinal Francis Arinze of Nigeria, a longtime Vatican heavyweight who's now retired, asked the African bishops to ensure that "ethnic belonging, language or social class do not become predominant in the assignment of work in the church and the national episcopal conferences."

Arinze also called upon African priests to "wholeheartedly accept a new bishop appointed by the Holy Father, without organizing factions with a ‘son of the soil' myopic mentality." The church's growing practice of appointing bishops from outside the dominant tribal group in a given area, Arinze said, amounts to "a powerful message to some African communities wounded by the politico-social virus of extreme ethnic [prejudice]."

Salesian Fr. Guillermo Luis Basañes, the order's general councilor for Africa and Madagascar, argued that religious congregations should not only "announce to all peoples and ethnic groups in Africa that it is possible to live together in diversity," but also show by example that "to live and work tougher is fruitful, useful, and even beautiful."

Basañes called upon religious orders to be models of "intercultural, international and inter-ethnic community."

On the subject of power, Archbishop Joseph Aké Yapo of the Ivory Coast asked rhetorically, "How can the Church in Africa be the salt of the earth and light of the world if she does not question herself about the management of the faithful and of priests, in the practice of power and authority?"

"If the church wishes to play an effective role as an artisan of peace, reconciliation and justice," he said, "she must start by putting into practice from within what she teaches."

Bishop Adriano Langa, a Franciscan in Mozambique, said the Catholic church must shoulder some of the blame for the phenomenal growth of the "sects," because of its failure to adopt more thoroughly African expressions of the faith.

"The African Catholic, trying to escape the European and Latin American style, and wanting to feel himself as a truly African Christian Catholic, leans towards his African brothers of other faiths and creeds and takes on their language and style," Langa said.

Langa faulted the Catholic church in Africa for "marginalizing, disparaging and even fighting African cultures; underestimating native languages; centering its evangelization more on children and less on adults, even in the recent past; forbidding the reading of the Bible, also in the not very recent past; [and] not translating the Bible into local languages."

The need for Bible translations in the native languages of Africa was a theme that also surfaced repeatedly during the 2008 Synod of Bishops on the Bible. One speaker, for example, noted that the Bantu linguistic group alone contains over 500 languages, and at least 250 of them have no Bible translation -- amounting to an estimated 14 million people unable to read the Bible in their native tongue.

Finally, the issue of a living wage for church workers has surfaced several times -- and once again, it was Arinze who put the argument in its most powerful form.

"Dioceses need to take care to honor contracts with religious congregations and especially to see that consecrated men and women, catechists, parish house workers and other church-employed men and women are adequately paid," Arinze said yesterday.

Arinze put an exclamation point on the argument in his typically pithy fashion: "It is a scandal when these humble workers have only holy water to take home at the end of the month."