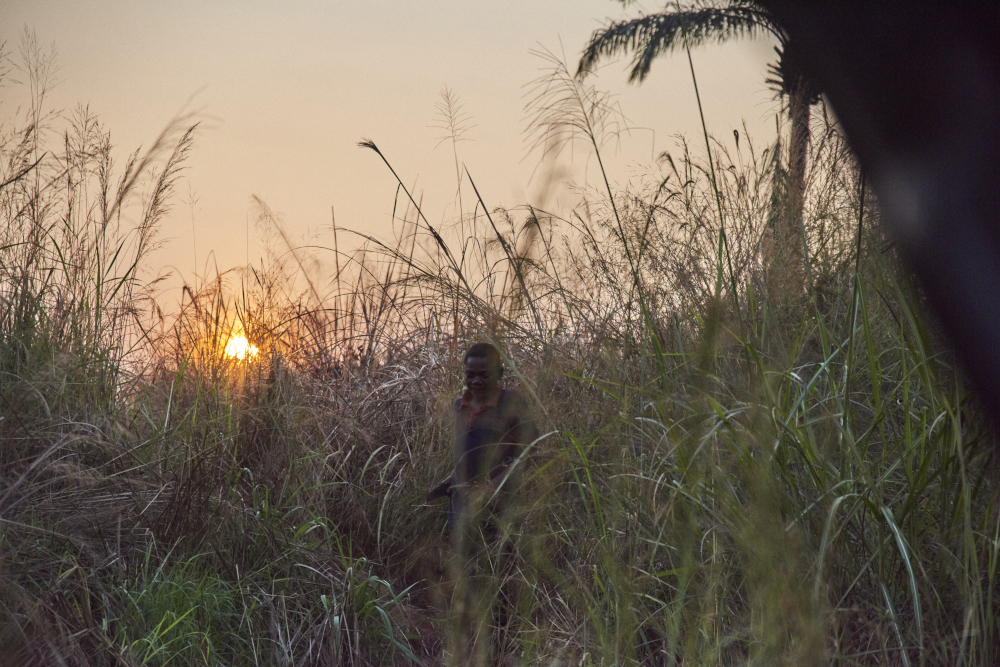 A boy walks through long grass along the road in Kasansa, Congo, April 9, 2019. The Congo River basin, which spans six African countries, is coming under pressure, partly due to clearing of the forests for subsistence agriculture, large-scale farming, illegal logging and lack of clear reforestation policies. (CNS/Catholic Relief Services/Sam Phelps)

The Congo River basin, which spans six African countries, is coming under pressure, partly due to clearing of the forests for subsistence agriculture, large-scale farming, illegal logging and lack of clear reforestation policies.

Even as the Catholic churches in the basin stress the need to care and protect the environment, Congolese bishops and officials warn that the forest is disappearing, little by little.

"The uncontrolled industrial and artisanal logging of timber is a big challenge. In addition, the waters are not sufficiently protected," said Henri Muhiya Musabate, national secretary of the Episcopal Commission on Natural Resources of the Congolese Catholic bishops' conference. "We deplore the pollution by extractive companies, but also by household waste, especially plastics."

Musabate said changes in the daily lives of people in the basin raise questions as well as certain awareness. He said the church has observed disruption of seasons, massive flooding, and drought in the northeast parts of the country. At same time, cattle herders from Central African Republic and Chad have invaded the basin's forests, looking for pasture and water for their livestock.

Rivers in the Congo basin are affected. The flow of the Ubangi River – the largest tributary of the Congo River – has declined in the past few years. On the side of the mouth of the Congo River, the waters of the Atlantic Ocean rise, year after year, Musabate said.

Consumption of firewood in cities where there is low coverage of electricity is a challenge, because the basin's trees being are exploited to feed the increasing demand. People living in the forest areas are cutting down trees to grow food in areas they consider fertile.

Catholic officials in Congo are tackling natural resource management through the Episcopal Commission on Natural Resources. The commission has collected data to inform the bishops, has trained the population, worked to influence laws and promote responsible attitudes on environmental protection.

"Through awareness, the action of planting trees in schools and other institutions, one can see a concern to preserve the forest to combat climate change," said Musabate. He said the church is raising awareness using Congo's Forest Code and Pope Francis' 2015 encyclical, "Laudato Si'."

Musabate said individual bishops are speaking out. Bishop Fulgence Muteba Mugalu of Kilwa-Kasenga recently made a plea against illegal exploitation of redwood found in the basin's Miombo forest.

As part of the effort to protect the forest of the Congo River basin, in 2015 Catholic bishops in the region created the Ecclesial Network of the Congo Basin Forest. It unites churches in Cameroon, the Central African Republic, Congo, the Republic of Congo, Gabon and Equatorial Guinea.

The Ecclesial Network's objective is to safeguard the forest, the waters of the Congo Basin, and its natural resources.

"The major challenge is how to safeguard this strategic reserve for humanity – this lung in the heart of Africa – given the demographic pressure facing our countries," Bishop Donatien Bafuidinsoni Maloko-Mana of Inongo told a March meeting on integral ecology in Washington.

Scientists say geographical features such as the tropical forests in Africa, Asia and the Pacific and South America help regulate regional and international weather patterns.

"Let us be clear, there cannot be climate solutions without forests," Astrid Knutsen Harstand, an official from Norway, said at a recent meeting at U.N. offices in Nairobi. "Tropical deforestation in rampant. It is escalating and it's threatening hard-won climate, biodiversity sustainable development gains."