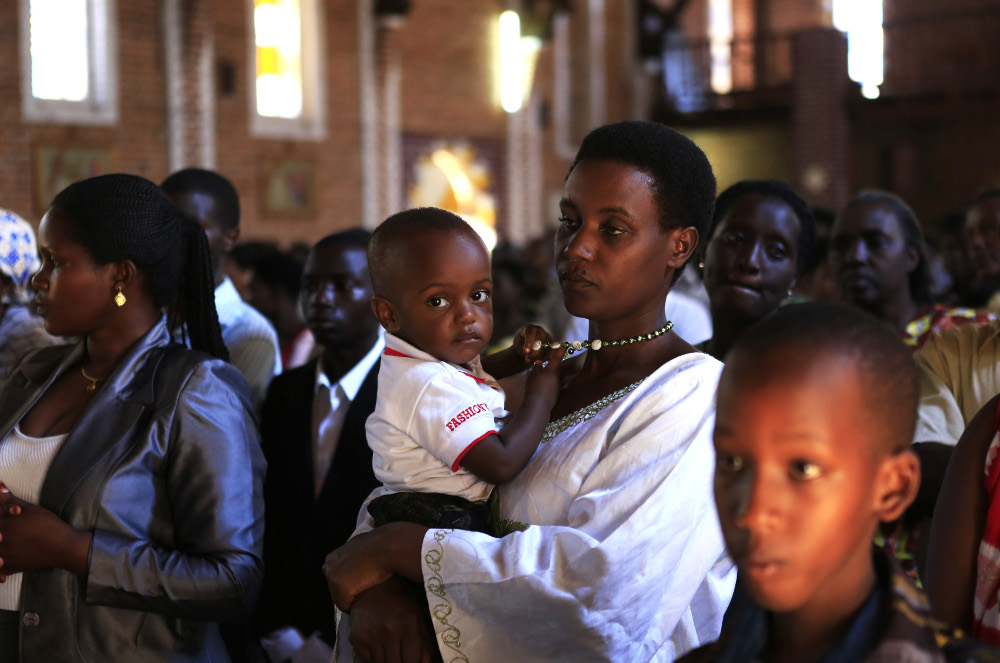 A family attends Mass in 2014 at a Catholic church in Kigali, Rwanda. The Rwandan bishops' conference urged steps be taken to ensure religious freedom after the government closed thousands of churches.(CNS/Noor Khamis, Reuters)

The buildings remained locked because of what the government said were health and safety issues, including lack of toilets, plastered walls and paved access roads.

"Most Catholics are shocked and disappointed; they don't understand what's happening and why there's been no explanation," said Fr. Martin Nizeyimana, the Kigali-based bishops' conference secretary-general.

"If measures are taken to protect the safety of people, this is good, but they should be explained, so people don't just arrive and find their church closed," he said.

"It was all very badly handled," he told Catholic News Service Aug. 14. He said the sudden closures had "deeply affected" Rwanda's Catholic Church, especially in rural areas, forcing the suspension of Masses and priestly ordinations.

He added that Catholics had continued to pray in the open air for good church-state relations, while church representatives negotiated with government officials to "bring the situation under control."

"Certainly, religious freedom is proclaimed under our constitution. But if they start closing churches without any warning, we quickly see a gap between law and reality. What's most important now is to ensure our church's mission can continue here," he told CNS.

Catholics make up around half the 12 million population of Rwanda, where religious groups have proliferated since a 1994 genocide of more than a million members of the Tutsi minority. A July 28 government statement said recognized religious denominations had grown from 50 to more than 1,000 since 1994.

In late July, the government said the safety measures had been agreed upon at a Feb. 15 meeting between government officials and "church leaders," following an "extensive consultation process."

Nizeyimana said Rwandan Catholic leaders had been represented at the talks but given "no warning or information" about the forced closures.

The government statement confirmed that 1,381 Pentecostal prayer houses had been closed under the February decree, and 15 percent of all mosques, as well as more than a third of the 71 Catholic churches in Rwanda's western Rusizi district alone.

"These closures do not infringe on freedom to worship, but rather address the alarming proliferation of places of worship in dilapidated and unhygienic conditions, as well as troubling behavior by unscrupulous individuals masquerading as religious leaders," the statement said. "The latter have, among other abuses, defrauded innocent followers, broadcast insults against women and other religions, and forced followers to fast to the point of death from starvation."

Nizeyimana also told CNS that the bishops were dismayed that promises made during Kagame's March 2017 talks at the Vatican with Pope Francis had not been honored. The official said the bishops would meet soon to adopt a "more muscular position" on current developments.

"Although progressive improvements were signaled last year, these have clearly remained at the level of declarations, causing inconvenience and disappointment," Nizeyimana said.