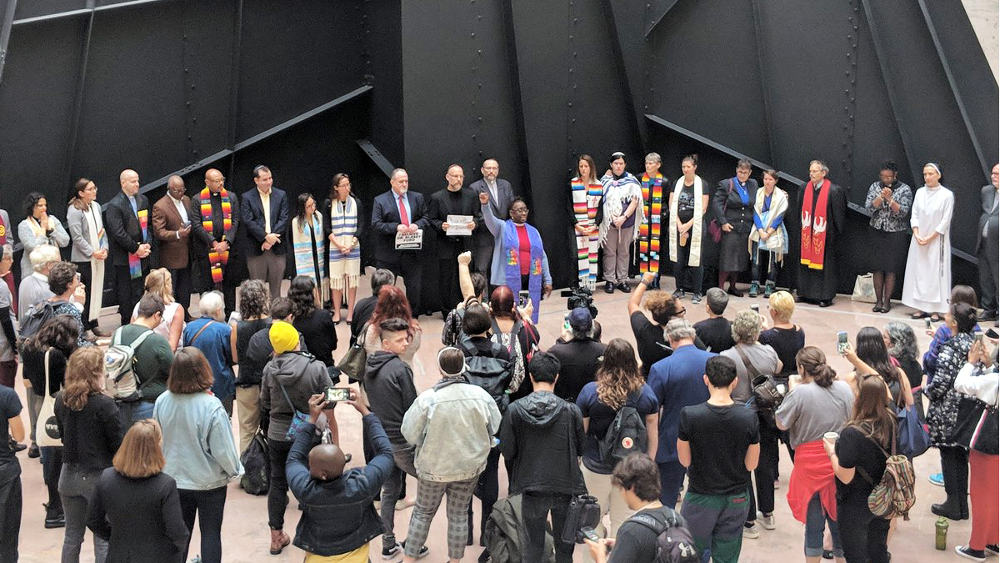 Faith leaders hold an interfaith vigil before the Senate Judiciary Committee's vote on Brett Kavanaugh's nomination to the U.S. Supreme Court on Sept. 28, 2018, in Washington, D.C. (Megan Simons/Alliance for Justice)

In the last hours before the Senate Judiciary Committee held its vote to send Brett Kavanaugh's U.S. Supreme Court nomination to the full Senate, the Rev. Susan Hayward fiddled with her cell phone as she headed to the office of Sen. Susan Collins, the Maine Republican seen as a potential swing vote against Kavanaugh.

Hayward, a United Church of Christ pastor in Washington, D.C., has friends in Maine, several of whom oppose Kavanaugh's nomination. Her friends weren't able to get through to Collins' office, but Hayward planned to hold up her phone when she arrived at the senator's office, so her friends could explain their concerns to the staffers there via video chat.

Hayward said a number of the clergy who have been protesting Kavanaugh's nomination are survivors of sexual violence, including herself.

"This process has been degrading to justice, to truth, to a God of justice, to women generally and to abuse survivors of all genders," she said.

Across the Hart building's atrium, the Rev. Katie Romano Griffin held up a sign that read "Feeling triggered? I am here to support you!!"

The Unitarian Universalist minister said several people had already come up to her during and after the protests to talk about their experiences with abuse.

"As much as I’ve been engaged in other aspects of this work today — in prayer, in witness — this is the core of my ministry," she said. "There are many people who have been struggling who are in tears, remembering things from 40, 50, 60 years ago … and it’s very live for them. Part of that human process that is often missing is this pastoral piece."

At a demonstration in the Hart building Friday morning, a coalition of more than 20 faith leaders from across the religious spectrum stood outside the Senate Judiciary Committee meeting as lawmakers arrived for the vote. Afterward, as they gathered before a crowd in the building’s atrium, the gaggle, assembled by the National Council of Jewish Women and other faith groups, prayed for victims of sexual assault.

"I am here as a pastor and as a woman. I know what it feels like to feel helpless and alone and not believed," said the Rev. Amber Henry Neuroth, United Church of Christ pastor in Alexandria, Va. "I have cried with many women who have felt the same. And I know in my heart that that is not God’s truth."

She added: "If you are one of those women, God loves you, we all believe you, and we will stand with you until this injustice is overturned."

Beyond the Beltway, too, this week's hearings seemed to have prompted women to volunteer their own experiences with unwanted sexual advances.

At a liberal church in a residential neighborhood of Greensboro, N.C., a prayer service was called to grieve the culture of violence directed at women and to support those voices often silenced or belittled.

Boxes of tissues beckoned as a group of eight women including the pastor entered the chapel at Congregational United Church of Christ and took their seats in a semicircle.

"We pause this day to recognize there are many among us here who have been wounded by violence, exploitation, coercion and manipulation," said the Rev. Julie Peeples, the church pastor, reading from a printed liturgy.

"There are many among us who are suffering and grieving," the group responded.

One woman spoke of being raped as a teen by a friend of her parents — a story she has previously shared only with her husband.

"I’m really, really angry," she said, asking that her name not be used. "I’m trying to do quiet reflection, but it’s all boiling up."

Another recalled her sister’s molestation at the hands of a Sunday school teacher years ago and the church’s refusal to confront the perpetrator.

An altar with candles flickering stood at the end of the room in front of a quilted illustration of a white dove.

During the final liturgy, the women prayed the refrain: "Pour out your healing and hope." 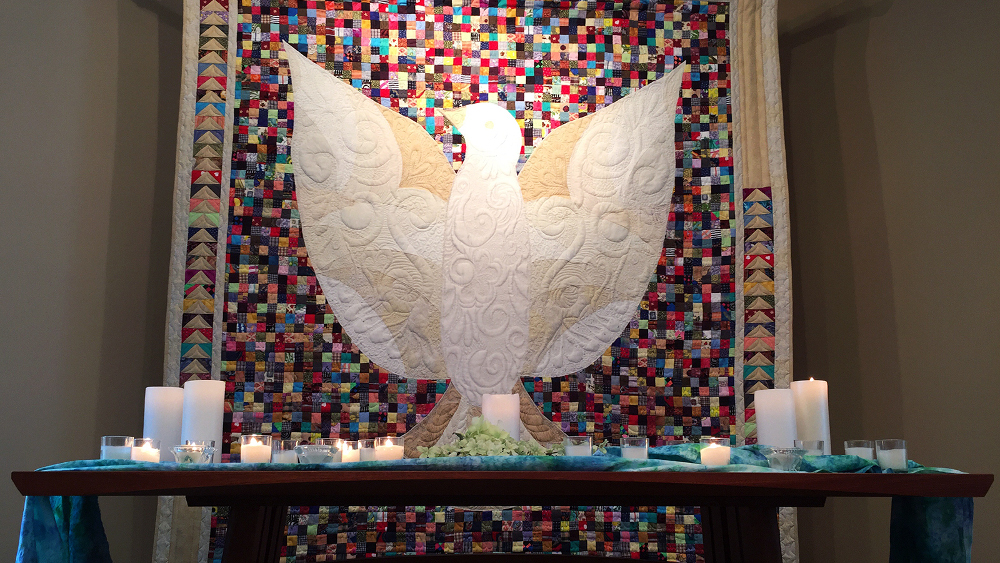 The altar in the chapel at Congregational United Church of Christ in Greensboro, N.C. Members were invited to light candles before the service Friday, Sept. 28, 2018. (Yonat Shimron/RNS)

"For the future of my granddaughters," said one.

"For the voiceless," said another.

And finally, "For Dr. Ford’s day-after."

If the tone of outrage was relatively muted among conservative Christian commentators — Robert Jeffress, senior pastor of the influential First Baptist Church of Dallas, told Lou Hobbs on Fox News on Thursday evening that he had "sympathy for Dr. Ford and the pain she's obviously in" — both sides were aware of the stakes for their faith communities.

"We all know that (the Democrats') No. 1 objection to Judge Kavanaugh is that he might restrict in some way the murder of 700,000 females every year in the womb through abortion," said Jeffress.

In Washington on Friday, one of the few prominent activists still making herself available to reporters was Linda Sarsour, an organizer of last year's Women’s March and a Muslim American activist.

"My faith as a Muslim teaches me that I have to be on the side of the oppressed, and a Brett Kavanaugh nomination is, in fact, an affront to the most marginalized and oppressed people in this country: black people, immigrants and refugees, women, LGBTQ communities," she said.

"So I’m here because I know the disaster that will be rained on our people if there is a conservative majority for the next four decades."