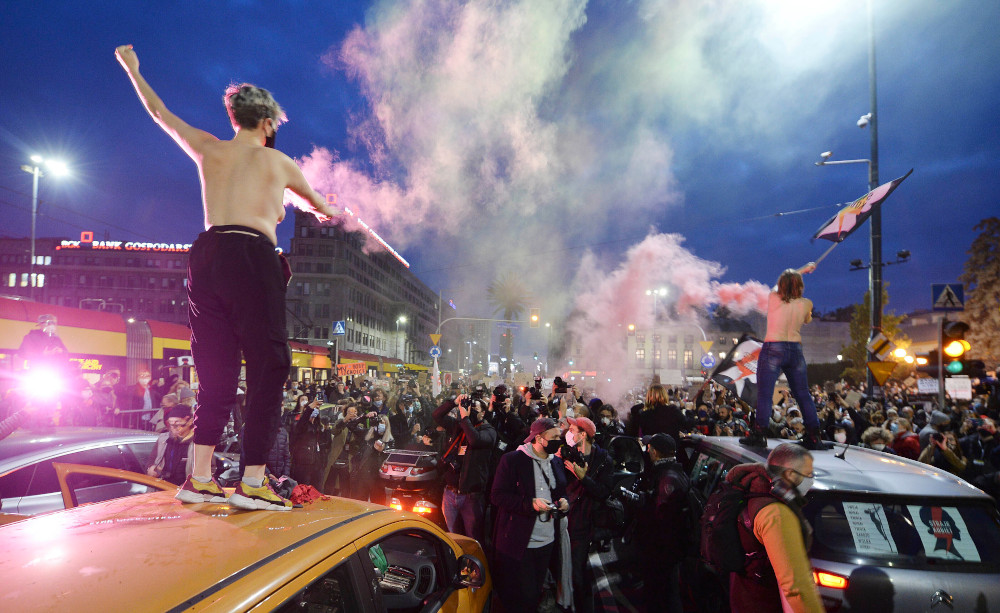 Women’s rights activists and many thousands of supporters held a fifth day of protests across Poland on Monday, defying pandemic restrictions to express their fury at a top court decision that tightens the predominantly Catholic nation’s already strict abortion law.

In Warsaw, mostly young demonstrators — women and men — with drums, horns and firecrackers blocked rush-hour traffic for hours at a number of major roundabouts. Some of them took off their shirts and stood topless on top of cars. Many held banners with an obscenity calling on the right-wing government to step down.

A group of far-right supporters held a counter-protest in front of a church and police in riot gear kept the two groups apart, using pepper spray at one point. Some of the people protesting the court ruling were detained and others sat down in the street to stop the police van taking away the detainees.

A protesting woman was taken to hospital with slight injuries after she and another woman were hit by a car. The other woman was not injured.

Organizers said people joined their protests in more than 150 cities in Poland, including Poznan, Lodz and Katowice. It was one of the biggest protests against the government in recent years.

In Krakow protesters chanted “This is War!” — a slogan that demonstrators have repeated often in recent days. They also shouted obscenities against the country's traditionally respected Roman Catholic bishops.

Krakow archbishop Marek Jedraszewski said the protests were marked by “aggression unknown so far in Poland, when the sanctity of churches, of sacred places is being violated.”

Protesters defied a nationwide ban on gatherings intended to halt a spike in new coronavirus infections.

They have taken to the streets each day since the Constitutional Tribunal ruled Thursday that it was unconstitutional to terminate a pregnancy due to fetal congenital defects. The ruling effectively bans almost all abortions in the country.

The ruling has not taken effect yet, because it has not been officially published, which is a requirement of a law's validity.

The head of a doctors' group, Dr. Andrzej Matyja, speaking on Radio Zet, criticized the ruling's timing during the pandemic, saying it amounted to an “irresponsible provoking of people to rallies” where social distancing cannot be maintained.

Poland's conservative leaders have also come under criticism from professors at Krakow's reputed Jagiellonian University who said that announcing such a ruling during a pandemic was an “extreme proof of a lack of responsibility for people's lives.”

In a letter to Prime Minister Mateusz Morawiecki and to President Andrzej Duda, who is infected with the coronavirus, the professors appealed for a “way out of the situation ... to be urgently found."

Many gynecologists have also criticized the ruling. Dr. Maciej Jedrzejko said the ban will result in a rise in the number of dangerous, illegal abortions, arguing that sex education and access to contraceptives are the best ways to limit abortions.

The ruling by the government-controlled court overturned a provision of the 1993 law forged by the country's political authorities and church leaders after the fall of communism. That law permitted abortion in only limited cases, becoming one of Europe's strictest abortion regulations.

When the ruling takes effect, the only permitted abortions will be if a pregnancy threatens the woman's health or is the result of rape or incest. 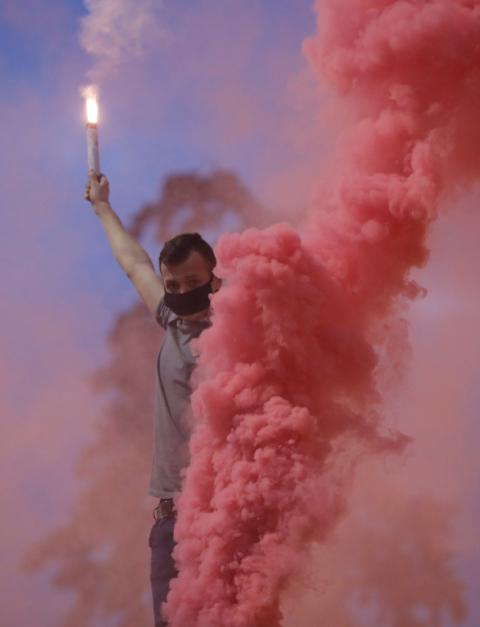 A protester holds up a flare at a protest in Warsaw, Poland Oct. 26, 2020. (AP Photo/Czarek Sokolowski)

Among those who support the ruling is European Parliament lawmaker for the conservative ruling party, Patryk Jaki, who is the father of a child with Down syndrome. He warned on Twitter that abortions can also eliminate healthy children “because you rarely are 100% sure.”

Jaki also argued that abortions contribute to the nation's low birthrate and said that they could be a “threat to Poland's state.”

Health Ministry figures show that 1,110 legal abortions were carried out in Poland in 2019, mostly because of fetal defects. The non-governmental Federation For Women and Family Planning estimates that Polish women undergo some 100,000 to 150,000 abortions a year, some illegally in Poland and others abroad.

Women's Strike, the key organizers of the past day's protests, says that forcing women to carry through pregnancies involving fetuses with severe defects will result in unnecessary physical and mental suffering for the women.

Group leader Marta Lempart said there will also be a nation-wide strike Wednesday and a protest march Friday in Warsaw, the seat of the government, the constitutional court and the right-wing ruling Law and Justice party behind the court’s decision.