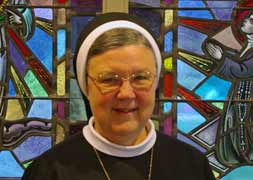 The largest-ever comprehensive study of Catholic sisters in America has entered its final phase, as information on women religious, collected over the last two years, is compiled for a confidential report to the Vatican by Dec. 31.

Mother Mary Clare Millea, who is directing the effort and writing the report, met in a closed session earlier this month in Hamden, Conn., with some of the 78 "visitors" -- nuns, priests and brothers -- who last year visited 90, or roughly one-fourth, of U.S. congregations of religious women engaged in service to church and society. Contemplative, cloistered communities are not part of the study.

The visits to a cross-section of communities were the third phase of the inquiry, following individual meetings between Mother Millea and major superiors of congregations, and circulation of a survey to all U.S. congregations on such areas as religious and prayer life, charism, governance, ministry, and demographics.

Mother Millea, a Connecticut native, has been directed by the Vatican to file written reports on each U.S. congregation as well as a composite report on the quality of women's apostolic religious life in the United States.

She said in a written statement to NCR that the March 4-6 meeting with the Apostolic Visitation's on-site visitors was a "valuable opportunity" to learn their insights and observations. The meeting helped identify "common threads of hope and concern" that emerged during the on-site visits, she said. It was attended by Milliea's core team staff, consultants and Archbishop Joseph Tobin, secretary for the Congregation for Institutes of Consecrated Life and Societies of Apostolic Life, commonly known as the Congregation for Religious.

"It also surfaced some excellent suggestions for promoting the vitality of apostolic women's religious life in our country," she said in the statement. "This data will be extremely helpful for me in the compilation of my final general report on the Apostolic Visitation."

She said the meeting confirmed her previous impressions that the visits to communities were conducted in a "climate of respectful listening."

In most cases, the visited communities accepted the offer to invite Catholic laity and other non-members of the community to share their impressions of the sisters' presence and ministry, she said.

"These sessions affirmed the esteem with which the sisters are regarded by those with whom they share their apostolic service and their desire to see a new flourishing of vocations," she said.

Tobin pledged the support of the Congregation for Consecrated Life in fostering the revitalization of religious life in the U.S., Mother Millea said.

The Apostolic Visitation of Institutes of Women Religious in the United States was initiated in December 2008 by the Vatican office overseeing religious orders under its former prefect, Slovenian Cardinal Franc Rodé.

Rodé, who retired from that position in January, said in a Dec. 22, 2008 decree that the effort was being undertaken to "look into the quality of the life of religious women in the United States."

The Vatican's announcement of the initiative took Catholic sisters in the U.S. by surprise, and raised suspicion and serious concerns, in part because such an undertaking is rare and the "purpose was not specific enough to know what was intended by Cardinal Rodé or how it originated," said Sr. Mary Whited, former general superior of the Sisters of the Most Precious Blood in O'Fallon, Mo.

Rodé later said the visitation was aimed at encouraging vocations and assuring a better future for women religious. He said in a Vatican Radio interview in November 2009 that the inquiry also was in response to concerns about "irregularities or omissions" in American religious life, including what he described as a secular mentality and feminist spirit.

Many congregations came to see the visitation as an opportunity to describe the vitality of their work and community life, and grow closer as a community. Some even have said their visits were cordial and warm, a sentiment echoed by Sr. Kieran Foley, spokeswoman for the Apostolic Visitation office. "The visits overall were extremely positive," she said. "Even if there was apprehension, a lot of it melted away. They [the visitors] were there to listen" to each community's story."

The Sisters of Charity of the Blessed Virgin Mary based in Dubuque, Iowa, were visited last November, and the entire congregation was engaged throughout all three phases of what congregational president Sr. Mary Ann Zollmann described as a significant event for the community. Many of the members shared their experience of BVM life "openly and honestly with the visitors," she said, however it felt like a one-way conversation.

"It is my hope that, in the spirit of mutuality, we will receive a report that honors the depth and extent of our congregational investment in the process."

The exercise has had its benefits, Zollmann said, including a renewed spirit and celebration of the BVMs' foundress Mary Frances Clarke, a greater sense of affection, communion and solidarity as a community, and stronger bonds with women religious everywhere as well as laity.

"So, although we have yet to receive any report for a process that has now gone on for almost two and a half years, no matter what may be Rome's final evaluation, the power of our sisterhood is being unleashed into our social, political and ecclesial systems recreating our world and Church," Zollmann said.

The Sisters of the Most Precious Blood in O'Fallon, Mo., were not among the visited communities, but Whited, former general superior, did meet with Mother Millea.

She said she trusts that the final report will reflect the importance of the many charisms represented by religious congregations who participated in the visitation, and that it will affirm the presence of women religious in the church in the United States.

She also said she expects that nurturing religious life into the future will be one of the challenges highlighted by the report.

"I hope that the concerns expressed around the flourishing of vocations to religious life will awaken, not only women religious, but other members of the church -- mentors, parents, teachers, clergy, etc. -- to the need for nurturing religious life into the future."

Editor's Note: Lots of background and commentary on the apostolic visitation can be found online at NCRonline.org/apostolicvisitation.

[NCR contributor Cheryl Wittenauer is based in St. Louis.]