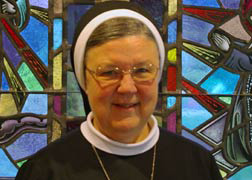 In her letter, Millea, superior general of the Apostles of the Sacred Heart of Jesus, and charged by the Vatican with directing the inquiry, issued more specific guidelines for site visits, along with a list of responsibilities requested of the visited communities and their leaders.

Millea once again requested the chosen communities to accommodate the visitors and to pay travel and lodging expenses, if possible.

The Millea letter informed religious superiors that each sister within the community be told that their community has been selected for an on-site visitation and that communities make available any sister the visiting team asks to interview.

“The on-site visit is an integral part of the visitation process,” Millea wrote in a letter to one congregation head, adding that it intends “to offer as many of your sisters as possible the opportunity to freely express their vision of the joys and challenges you face in seeking to live your charismatic identity and mission.”

NCR obtained a copy of the letter.

It stated that Millea did not yet know the number of person who will be interviewed, adding that once she does, the names of other visitation team members will be shared. The letter stated that all visitors are religious with at least 20 years of profession and will have taken part in a weekend orientation process before they arrive.

This week Millea’s office issued a statement saying that 78 religious had been invited to an orientation session in St. Louis the weekend of Feb. 26-28.

Millea reiterated that visitors will be bound by strict confidentiality and will express no judgment either in writing or orally to the major superior or to any other member of the religious community prior to, during or after the visit.

She said that at the end of the site visit, the team will formulate and send to her a report in which they will seek to articulate “the accomplishments, the key strengths and challenges” of the community as revealed in dialogue with community members. The report will also include recommendations the visitors think are appropriate. She said these reports will assist her in writing a final report that she will submit to the Vatican Congregation for Institutes of Consecrated Life and Societies of Apostolic Life, headed by Cardinal Franc Rodé.

Millea stated that all sisters residing at the chosen site will be asked to at least meet and greet individually one of the visitors during the on-site visit. Sisters who do not reside at the site who request to speak with a visitor shall be permitted and welcomed to do so at the site. Phone or Skype interviews will be accorded to those who cannot come to the site.

Millea stated that if the community wishes up to 8 persons who are not vowed members of the community can be invited to take part in a 90-minuted focus group session with team visitors. Sisters of the visited community will not be present at the meeting, an accompanying guideline stated.

The length of the on-site visit will vary, the Millea letter stated, depending on the number of sisters to be interviewed. Normally, the letter stated, the team will arrive on a Sunday and will stay no later than Friday of the same week.

“We ask you to provide room and board for the visitors and, if possible, reimburse transportation costs related to the visit, the Millea letter stated.

According to a document that accompanied Millea’s letter titled “Phase 3: On-site visit to Religious Institutes: Responsibilities of Major Superiors,” these responsibilities include: Meeting arriving visitors, arranging an open gathering of visitors and sisters, arranging daily schedules for visitors, including time for individual and group interviews, liturgy, meals and community prayer, and discussions for possible reimbursement of visitation team’s room, board and travel expenses.

The major superiors are also requested to provide private work space for the visiting team, private rooms (one room per team member) for individual interviews, phone use for visitors in a private area, a paper shredder, copy machine, computer and printer; and a list of names and contact information of all sisters in the community.

Tom Fox is NCR editor and can be reached at tfox@ncronline.org.