Are these sisters dangerous women? 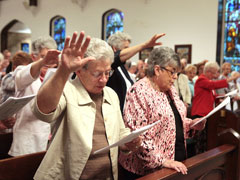 Back in the 1990s, I saw a movie, set in a big city, that focused on a small group of people who wore very distinctive uniforms. This group wasn’t carrying out its mission very well. The members of the group were portrayed in the film stereotypically. One was gullible. One prayed too much. One was really, really dumb. But then they were saved when someone came from completely outside the group, someone totally unexpected. She got everyone working together. And the group was suddenly successful. The actress who portrayed that woman was Whoopi Goldberg.

It was “Eddie.” The city was New York. The group was the New York Knicks, a team that was constantly losing until one day a fan named Eddie (Goldberg), through a fluke, became their coach. She turned the Knicks into a winning team.

I bring up “Eddie” because it has something to do, I think, with the disrespect that modern society -- whether Hollywood or the Vatican -- accords to nuns. Women religious, who have devoted their lives to the service of others in the service of God, have a right to feel frustrated and angry at the way they are portrayed by the Catholic church hierarchy and mainstream media.

It is as if the bishops, movie producers and many other opinion leaders have gone out of their way to misunderstand the work that sisters do, to willfully misunderstand them as people. It’s almost as if there is a conspiracy to belittle these women, to label them either as uppity or dotty, to laugh at them and slap them down.

This is rooted in the status of nuns as outsiders. As Americans, we live in a culture that makes fun of everyone. We say with pride that nothing is sacred. Exhibit A: “Eddie.”

When they are winning, we will worship at the altar of sports teams like the Knicks. But, if the Knicks have a bad season or two -- or even a bad game -- we will boo them and ride them and deride them.

As a culture, we like to cut our heroes down to size. It’s an aspect of jealousy, for sure, and a socially acceptable meanness. We are unsettled by these heroes, whether basketball players or movie stars or politicians -- by their otherness. So we like to see them unsettled.

Still, they are doing what we do every day, trying to use their skills to gain status and make money.

The otherness is much stronger for women who are using their skills in ways that aren’t aimed at bringing in a lot of dough or accolades. Sisters, for modern-day Americans, seem really odd.

Our society gives a lot of lip service to the idea of God, to the sacredness of a human being, to truth. But how much faith do we really have? How comfortable are we, as a society, with ideals, visions, dreams?

Not much, if our treatment of nuns in modern media is any measure.

In movies, plays, ads and songs, sisters -- always in the religious habit that most real-life nuns set aside decades ago -- are shown as clucking hens, sometimes loveable, more often just plain stupid. They are outside the world, needing to be saved from the harsh realities of life. Like by a Las Vegas showgirl. Exhibit B: “Sister Act.”

The movie defines a nun on the basis of her habit, so distinctive, so otherworldly, so un-normal. And that’s how American society sees sisters. They’re not after the good life. They’re not looking for wealth and comfort, the American dream. Instead, they work to improve the lives of the poor and oppressed. In a nation with a long history of violence and the largest military in the world, they work for peace.

They’re seen as good-hearted, perhaps, but childlike. Asexual naifs. Talk about not fitting in.

They are the butts of Hollywood humor because they are dangerous. We make fun of what threatens us. This is how this nation has dealt with communists, anarchists, hippies, Native Americans and African-Americans. To blunt their challenge, sisters are reduced to punch lines.

Humor hasn’t been the method of the Vatican, though. Rome’s weapon has been a club -- a bureaucratic club to crack down on sisters for failing to toe the line that male hierarchs have laid down. For listening to the Spirit and following that inspiration, for being creative, for coloring outside the lines.

Sisters are a challenge to the male power structure in the Catholic church because they’re not male.

Recent popes and prelates have made so much of the maleness of the clergy, arguing against female priests with great vehemence and theological legerdemain, that, of course, women religious are a challenge.

They do God’s work without being male. So, unless they are knocked down and forced into some sort of male-defined orthodoxy, their work raises an unanswerable question: If women, as nuns, can do God’s work, why can’t women do God’s work as priests?

Nuns are a danger to the Vatican. That’s why they’re under attack.

Still, if it weren’t so hurtful and so downright mean, sisters might take all this attention from Hollywood and the Vatican as a compliment. It is rare that the purveyors of mass culture and the male-appointed male custodians of the Mass join together for any reason. Yet, both are frightened by women religious. So, nuns today find themselves undergoing a daily martyrdom of ridicule and discipline.

Over the centuries, saints have often been seen as threats, and have often paid with their lives. Consider Thomas à Becket and Joan of Arc and Thomas More. And Edith Stein, a Carmelite nun slain in the Holocaust. And Maura Clarke, Ita Ford and Dorothy Kazel, women religious who, with laywoman Jean Donovan, were murdered in 1980 while doing missionary work in Central America. Most saints, though, don’t pay with their lives. Instead, they find themselves to one extent or another fighting off attacks by secular society and the church establishment.

This sort of slow, day-by-day-by-day martyrdom is a grinding thing. Its aim is to grind the subjects down into submission. I don’t think today’s women religious will be ground down. They may have to give way here and there. They may, at times, have to wear the sackcloth of “orthodoxy.”

With an average age of more than 70, they will certainly have to rethink what they do and how they do it. But it’s better for them, listening to the Spirit, to reassess and refocus their mission for the 21st century than for church disciplinarians to impose a vision by fiat.

These are tough times for nuns. Yet, however battered they are by Hollywood and the Vatican, I can’t see them closing their ears to the Spirit. They will continue to listen and respond to God’s call. Of that, I’m sure.

[Patrick T. Reardon is the nephew of Dominican Sr. Julia Reardon, who died at the age of 93 last November.]

NCR will be reporting on the LCWR assembly all week. Previous reports:

Are these sisters dangerous women?