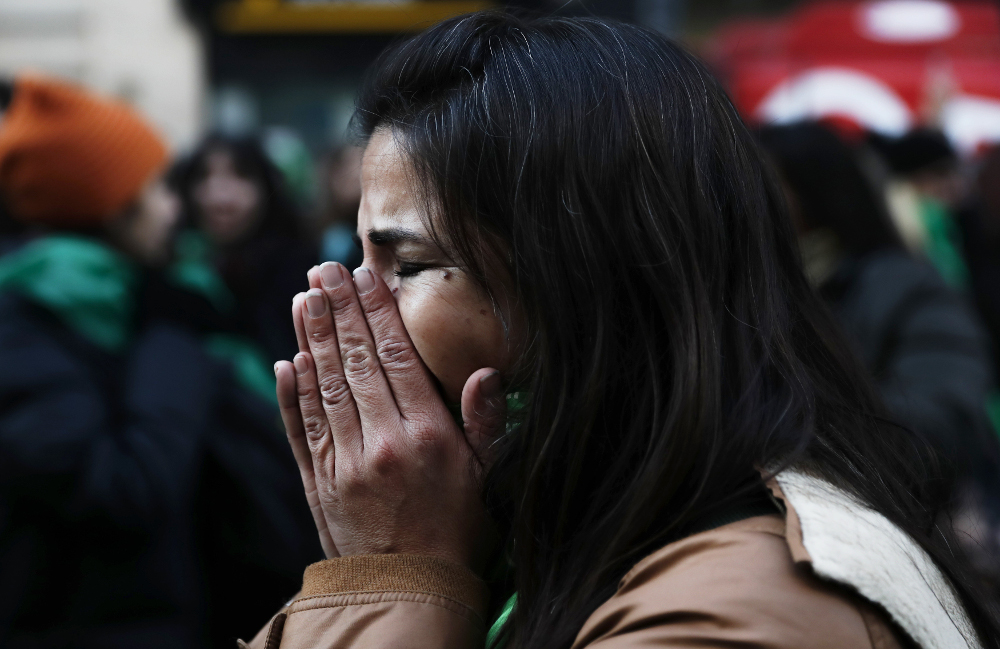 A woman in Buenos Aires, Argentina, reacts June 14 after hearing that the nation's lower house approved a bill to legalize abortion in the first 14 weeks of pregnancy. (CNS/David Fernandez, EPA)

Argentina's bishops expressed disappointment with the approval of an initiative that moves the South American country closer to legalizing abortion. But the bishops also pledged to review their social ministries to better attend to youth and women.

The country's lower house of congress voted 129-123 to approve the initiative, which decriminalizes abortion during the first 14 weeks of pregnancy. The initiative now goes to the country's senate.

"This decision hurts us as Argentines," the bishops' conference said in a statement. "But the pain for the abandonment and the exclusion of innocents must be transformed into strength and hope, to continue fighting for the dignity of all human life."

The close June 14 vote on the abortion issue reflected division in Argentine society, according to observers in the majority Catholic county. The law won support in big cities, but was opposed in the provinces. Supporters and opponents crowded streets in the capital — with supporters waving green handkerchiefs — as lawmakers debated through the night and the outcome remained uncertain until the final hours.

A government survey taken in April showed Argentines split on this issue, with 46 percent opposing legalization and 45 percent supporting it.

President Mauricio Macri allowed the legislation to proceed, while expressing his own personal opposition to abortion.

Macri had called for a "mature" debate on the issue and said he would not veto any abortion legislation. One observer said the president's willingness to allow the issue to be debated was being widely interpreted as a "smokescreen," as Macri has pushed difficult economic reforms, and the Argentine economy has faltered in 2018 with the currency plunging precipitously.

"While people are focused on the (abortion) debate, the economic policymakers can work without being disturbed, because all the public attention is focused on this debate and then the World Cup," said Fernando Farias, an Argentine journalist. "This is a good time to pass unpopular economic laws."

The then-archbishop of Buenos Aires, Jorge Mario Bergoglio — now Pope Francis — led church opposition to a same-sex marriage bill, which was approved in 2010. Farias said the bishops' opposition to abortion was somewhat subdued because lay Catholics led the opposition this time.

"The church and Macri ... are not on as close of terms as you would have expected," Farias said, adding that some in Macri's party disapprove of the pope's pronouncements on economic matters and his perceived closeness with controversial people in a previous government.

Guillermo Galeano, spokesman for the Diocese of Lomas de Zamora, concurred that the legislation came at a time when tough economic issues were being discussed, but also that there had been a perception of "disagreements between the government and Pope Francis."

The legislation now goes to the Senate, where Galeano expects approval to be "more difficult," but he cautioned: "It's a surprise what happened today, so what happens in the Senate could also be a surprise."

Argentina's bishops took the approval of the legislation as a call to action.

"As pastors, this recent time has caused us to recognize weaknesses in our pastoral work: integral sexual education in our educational institutes, the full recognition of women and men, and the accompaniment of women who are exposed to abortion or who have gone through this trauma. All of these are calls of a reality, which demands a response as a church," the bishops' statement said.

"With humility and courage, we propose continuing to work in the service and care of life."