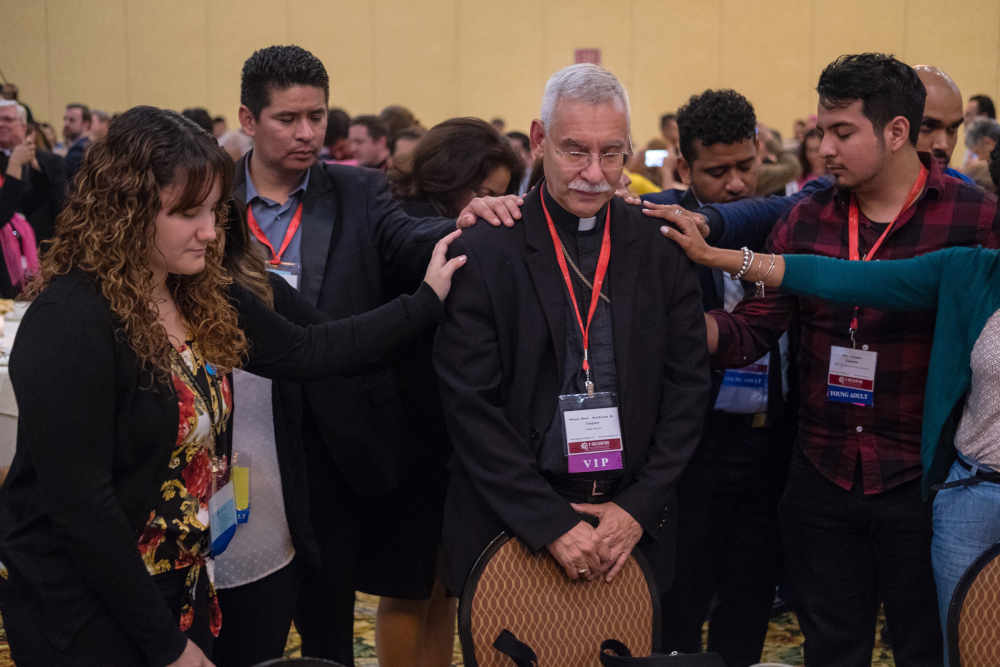 Catholic young adults pray over Bishop Anthony Taylor of Little Rock, Ark., at the Fifth National Encuentro in Grapevine, Texas, Sept. 21, 2018. Bishop Taylor Feb. 8 released an updated list of people who had assignments in Arkansas and against whom credible allegations of sexual abuse of a minor were filed. (CNS/James Ramos/Texas Catholic Herald)

Bishop Anthony Taylor released an updated list of people who had assignments in Arkansas and against whom credible allegations of sexual abuse of a minor were filed.

The bishop's addition of one priest and a religious brother to the list Feb. 8 followed an extensive review of more than 1,350 files of priests and religious who have served in Arkansas during the past 70 years.

In September, Taylor released the first list following an internal review of diocesan files. The original list included the name of one former priest who was previously identified and 11 formers priests who were identified for the first time.

The Diocese of Little Rock hired the Kinsale Management Consulting to conduct an independent review of diocesan clergy files after the September release. Kinsale has conducted similar reviews in dioceses across the country.

Taylor also said that after the September release, the diocese received new reports of abuse allegations, most of which were against priests already listed. He said none of the allegations involved priests currently in active ministry in Arkansas and that the alleged incidents occurred prior to 2002.

"Although it is difficult to or impossible to investigate such allegations after a priest has already died, the diocese investigated all the new allegations to the extent possible or referred them over to the appropriate civil authorities or religious orders," he said in a news release.

All new allegations were reviewed by Kinsale investigators, he added.

"We have also contacted several religious orders whose clergy may have served in our diocese at some point in the past and obtained additional information from some of them. Several orders are currently in the process of conducting their own external review – including Subiaco Abbey – with the goal of publishing their own lists sometime in the future. When they or other dioceses publish or update their own lists, we will update ours as well," Taylor said.

Subiaco Abbey is a Benedictine monastery in Subiaco, Arkansas.

During its review, Kinsale "made no dramatic discoveries," the bishop explained, "but their efforts confirmed that we have a clear understanding of the scope of incident of clergy sexual abuse committed in the past."

Kinsale's findings were shared with the Little Rock Diocesan Review Board, he said.

The bishop noted that as of Feb. 8, the diocese had "not paid any money to settle legal claims related to the priests" named in the list.

However, he said, the diocese has spent about $205,000 from a diocesan insurance fund to pay for counseling and other assistance to people who alleged child sexual abuse by a priest, including "some cases in which the allegations were unverifiable but where the person was nevertheless in obvious need of help."

"We have tried to be as generous as possible in providing this help," he said, "always giving the person the benefit of the doubt."