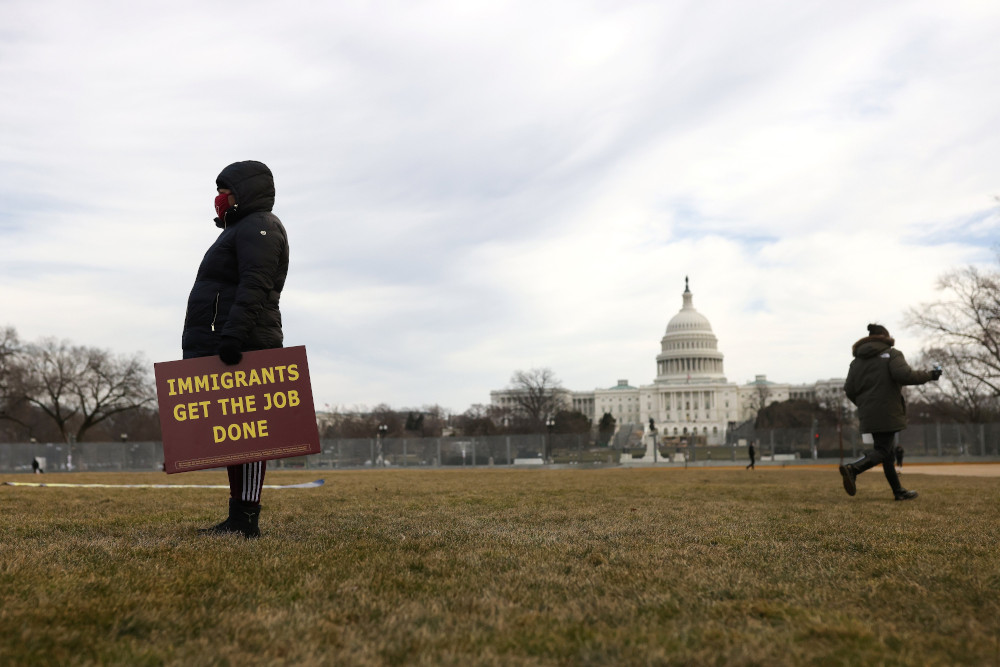 An immigration advocate is seen on the National Mall near the U.S. Capitol in Washington Feb. 17, 2021. (CNS photo/Reuters/Tom Brenner)

Democrats formally introduced one of the most ambitious plans to date to address legal and illegal immigration in the U.S., while at the same time signaling limits for those currently attempting to enter without documentation at the southern border.

The Biden administration's U.S. Citizenship Act of 2021, introduced in Congress Feb. 18, seeks to legalize some 11 million unauthorized immigrants currently in the U.S., with a special focus on reunification of families.

It would offer immediate permanent resident status to some groups, such as young adults brought into the U.S. illegally as children, farmworkers and those under a program known as Temporary Protected Status, while also providing an eight-year path to citizenship for others.

But the proposal says it will focus on legal relief solely for migrants in good standing who entered the country prior to Jan. 1, 2021.

Though pundits say the bill has little chance of becoming law, it changes the immigration policy debate of the last few years, from one focused on expelling migrants and keeping them out, to one focused on trying to fix the reasons they leave their homelands and head to the U.S.

The bill includes $4 billion to address the region known as the Northern Triangle and says that "increasing assistance to El Salvador, Guatemala and Honduras," will depend "on their ability to reduce the endemic corruption, violence and poverty that causes people to flee their home countries."

Corruption in the region has long been a problem and one President Joe Biden, as vice president in the Obama administration, identified as one of the root causes forcing migration to the U.S. With little opportunity to get an education or to find a way to make ends meet at home as politicians enrich their fortunes, many in the region choose to leave.

"In the longer term, Biden's strategy for Central America will ultimately depend on the region’s governments committing to significant domestic reforms," wrote Benjamin Wilhelm, assistant editor of World Politics Review in a December 2020 article about the U.S. president's approach to address immigration from Latin America.

The bill, introduced by Rep. Linda T. Sanchez, D-California, and Sen. Robert Menendez, D-New Jersey, both children of Latino immigrants, also says it will look at "safe and legal channels for people to seek protection, including by establishing designated processing centers throughout Central America to register and process displaced persons for refugee resettlement and other lawful migration avenues — either to the United States or other partner countries."

What's barely mentioned is border security but a senior administration official, who spoke on the condition of anonymity late Feb. 17, said "we're open to a conversation with anyone about this, but we think this is a much more comprehensive way to deal with this issue than just simply a wall."

Ronald Reagan in 1986 was the last U.S. president to successfully rally Congress to pass legislation that legalized, on such a grand-scale, groups that had entered the country without permission to do so by granting 3 million people what some call "amnesty."

While there seemed to be no bipartisan support, the pro-immigrant, Washington-based America's Voice tweeted Feb. 18 support from young migrants who long have lived in the U.S. without documentation, including Glo Harn Choi, a Korean immigrant who lost his visa status at age 21.

"We will do everything in our power to continue the push to make sure all of us have the ability to thrive and not just survive," his tweet said.

The Interfaith Immigration Coalition, a network of faith-based organizations that support immigration reform also tweeted Feb. 18: "We are only as healthy and as safe as our neighbors, for we are all bound together. Congress has a moral imperative to provide relief + a pathway to citizenship for essential workers and their families."

In a news release, Gustavo Torres, executive director of the nonprofit CASA organization that works with Latino and immigrants in Maryland, Pennsylvania and Virginia, praised the introduction of the bill.

"Today is proof that we the people are most powerful when we come together and demand immigrant justice. We are one step closer to citizenship for 11 million people; reuniting families that have been heartlessly targeted by the Trump administration," he said.

"By introducing this bill so soon after inauguration, leaders from Congress to the White House have shown that the time for relief is now," he continued. "We look forward to engaging with our elected leaders to ensure that communities directly impacted by a racist criminal justice system are covered by the bill because we have fought for way too long — in the streets and at the ballot box — to leave any of our members behind.

"Still, this is the most comprehensive and pro-immigrant bill we have seen in decades and we congratulate the president and congressional leaders for advancing long-needed justice for immigrant families."

One of the organization's youth members, Morelys Urbano, originally from the Dominican Republic, also said via the news release, that immigrants should be treated equally with the dignity "we all deserve as human beings."

"We are asking Congress for laws that can grant us a way of not being afraid in this country and a way of not fearing for our lives," she said.

"We are encouraged by this important step toward fulfilling the promises President Biden made on Inauguration Day," said Teresa Romero, president of the United Farm Workers . "We look forward to Congress continuing the work to rebuild what is broken and to blaze a path forward."

"The transformative immigration bill put forward by the Biden administration recognizes the humanity and contributions of immigrants — and is the result of decades of determination by immigrants fighting for their right to remain home in the U.S.," she said. "We are at a promising, turning point in America, making it more important than ever to keep striving forward."