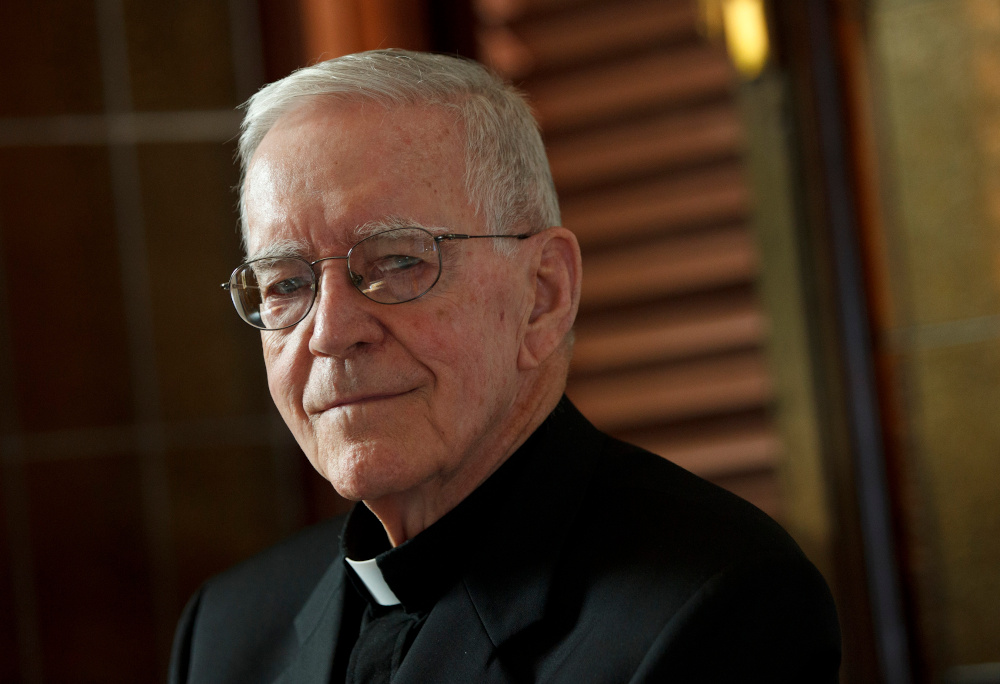 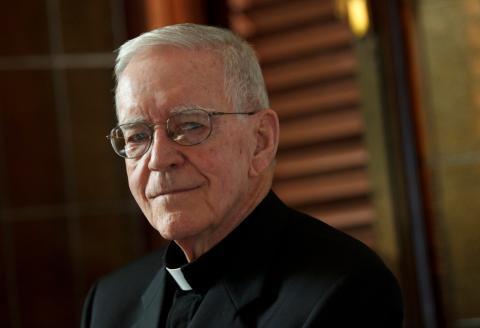 Bishop William J. McNaughton, a Maryknoll missionary for 66 years and the first bishop of Incheon, South Korea, from 1962 until his retirement 2002, died Feb. 3 at Cedar View Rehabilitation and Health Care Center in Methuen. He was 93.

McNaughton attended all four sessions of the Second Vatican Council from 1962 to 1965, missing only two days because of illness.

A wake service for him was held Feb. 10 at Our Lady of Good Counsel-St. Theresa's Church. His funeral Mass was celebrated at the church Feb. 11, followed by burial followed in St. Patrick's Cemetery in Lowell, Massachusetts.

A memorial Mass is to be celebrated Feb.18 at the Maryknoll Society Center in Ossining, New York.

William John McNaughton was born Dec. 7, 1926, in Lawrence, Massachusetts, the son of William John and Ruth Irene Howe McNaughton. He was the oldest of five children.

He graduated from St. Augustine's Grammar School in Lawrence in June 1940 and from Central Catholic High School, also in Lawrence, in June 1944. He entered Maryknoll Apostolic College, known as the Venard, in Clarks Summit, Pennsylvania, Sept. 2, 1944.

At Maryknoll Seminary in Ossining, he received his bachelor of arts degree in philosophy in 1948, bachelor of theology degree in 1953, and a master's degree in religious education in 1953.

One month before his June 13, 1953, ordination as a Maryknoll priest, he was assigned to the Maryknoll Mission Region in Korea. After ordination, McNaughton studied the Korean language for one year at the Far Eastern Language Institute at Yale University. He arrived in South Korea July 22, 1954.

On June 6, 1961, St. John XXIII raised the status of the Incheon area, where Maryknoll priests had been working since 1958, to that of an apostolic vicariate. The same day, McNaughton was named a bishop and appointed apostolic vicar of Incheon. He was ordained a bishop by Cardinal Richard Cushing of Boston in St. Mary's Church in Lawrence Aug. 24, 1961.

On March 10, 1962, St. John XXIII established the hierarchy in South Korea, raising all the apostolic vicariates to the status of dioceses, and McNaughton became the first bishop of the new Diocese of Incheon and served for 41 years.

"Every light was on in the basilica because of television," said the bishop recalled in an interview with Catholic News Service in October 2012, when he returned to Rome for celebrations marking the golden anniversary of that momentous event.

"Literally, my mouth dropped as I walked in and looked up. Because I was used to little tiny chapels, small churches in Korea. This was unbelievable," he said.

McNaughton said the council's "greatest highlight" was the approval of "Lumen Gentium," the Dogmatic Constitution on the Church, which he called "a magnificent document" that dedicates an entire chapter to the subject of the "people of God."

Over the years, with the zeal of many priests, religious and laity, the Diocese of Incheon, like the other dioceses of South Korea, expanded greatly with many conversions and many vocations. Schools, hospitals, homes for the sick and aged, and many other institutions and associations reached out to youth, laborers, the poor, infants, the training of lay leaders and more.

McNaughton's achievements included holding a diocesan synod in 1999-2000 and opening an Incheon diocesan major seminary. On Sept. 20, 2000, he blessed the new seminary.

In July 2014, ahead of Pope Francis' trip to South Korea that August, McNaughton gave a phone interview to the CNS Rome bureau to share his perspectives on what the pontiff would discover about the Catholic Church there the retired bishop had spent nearly half a century building up.

He said Francis would find a Catholic Church that exemplified much of what he hoped for the church around the world, including a highly active laity, extensive efforts to help the needy and strong relations with non-Christian communities.

"The blood of martyrs is why the church is so strong in Korea," McNaughton told CNS, noting the more than 10,000 Korean Catholics killed for their faith between 1785 and 1886, 124 of whom Francis beatified during his trip.

"To this day, they talk about it, they urge people to have the spirit of the martyrs," the bishop said.

One legacy of that persecution is an extraordinarily prominent role for lay Catholics in South Korea, he said. "Evangelizers are not so much the priests and the sisters as the very persons themselves, the Catholic laity," he explained. "Once they get the faith, they propagate it among themselves. They know how to spread the faith."

When he turned 75, McNaughton submitted his resignation to the pope as required by canon law. St. John Paul II accepted it April 25, 2002. As coadjutor, Bishop Boniface Choi Ki-san immediately succeeded him and was installed that same day as the second bishop of Incheon.

At his request after his retirement, McNaughton was assigned to minister to the Maryknoll retirement community — now called the Senior Missioner Community — effective July 1, 2002. Upon his return from South Korea, he resided with his sister in Methuen. In 2018, he celebrated his 65th jubilee as a Maryknoll priest.