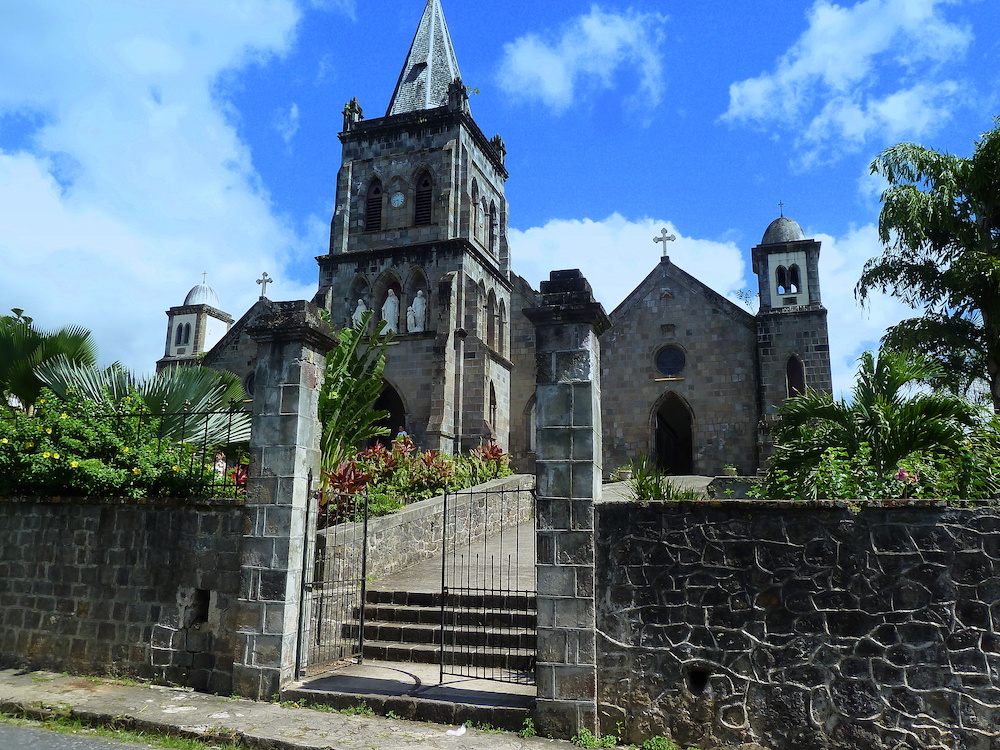 The Our Lady of Fair Haven Cathedral in Roseau, Dominica is pictured in a 2012 photo. The Caribbean island nation has around 72,000 residents, according to the CIA World Factbook, of whom about 61% are Catholic. (Wikimedia Commons/Edgar El)

In 2013, Malzaire wrote in an opinion article for the website Dominica News Online that the Catholic Church in the Caribbean island nation supported the Vatican's 2008 statement to the United Nations. The Vatican statement condemns "all forms of violence against homosexual persons" and urges "all States to take necessary measures to put an end to all criminal penalties against them."

Dominica is about 82% Christian, according to the Association of Religion Data Archives.

The Dominica Christian Council has a duty to promote Christian values and oppose any legislation that "challenges, opposes and/or is likely to degrade these values and beliefs, public decency and/or public morality," the bishop wrote in the affidavit.

"The Christian values concerning sexuality, the family and the sanctity of marriage are no exception," Malzaire wrote. "It is in this vein that the Applicant [the Dominica Christian Council] wishes to be heard."

The court case began in 2019 when a gay man in Dominica, who has remained anonymous for his safety, sued to challenge several sections of Dominica's Sexual Offences Act in the Caribbean island nation's High Court of Justice. 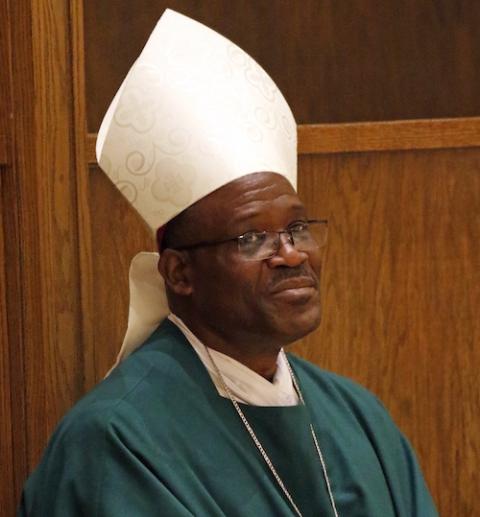 Bishop Gabriel Malzaire of Roseau, Dominica, during a Mass of thanksgiving in celebration of Black History Month Feb. 17, 2019, at the Immaculate Conception Center in Douglaston, New York (CNS/Gregory A. Shemitz)

The Canada-based HIV Legal Network, which is one of the groups supporting the claimant, said in a press release that these sections of the law have effectively turned all LGBTQ people into "presumed criminals." Their precarious legal status makes them vulnerable to extortion, harassment and physical violence, according to the network.

A local LGBTQ advocacy group, Minority Rights Dominica (MiRiDom), has called for an end to the criminalization laws.

"Homosexuals are not requesting special rights, but merely to be respected as human beings," said MiRiDom president Daryl Philip in a Nov. 26 presentation on the nation's Sexual Offences Act. Philip said in the presentation that it was important for the bishop to speak out against the criminalization of adults for consensual sexual acts, because of the stature of the Catholic Church in Dominica.

Because LGBTQ people are considered presumed criminals, the nation's police often refuse to help them when they are harmed, said Tomlinson, who was born in Jamaica and moved to Canada after receiving homophobic death threats in his own country. He has worked on legal cases defending LGBTQ rights in Dominica, Jamaica and Barbados and conducted police sensitivity training in Dominica.

Police say LGBTQ people "are causing this upon themselves, because they are engaging in an illegal activity," Tomlinson said. "[They say] 'What do you expect — the society doesn't like homosexuality, so you must expect that they'll attack you.' "

A 2018 Human Rights Watch study on LGBTQ rights in Dominica and other English-speaking Caribbean nations found that many respondents had experienced harassment from the police themselves. One trans woman from Dominica told researchers she had experienced various physical attacks due to her identity. When she went to the police, she said, they did nothing.

"[Instead] they make fun of me," she told researchers. "I'm not taken serious at all."

In addition to being subjected to homophobic verbal and physical violence, the claimant in the lawsuit was attacked in his own home, yet the police refused to investigate, according to a Q&A about the case published on the HIV Legal Network's website.

"The way he's hoping to get some protection from the state is to have this law repealed, so that his humanity can be recognized," Tomlinson said. 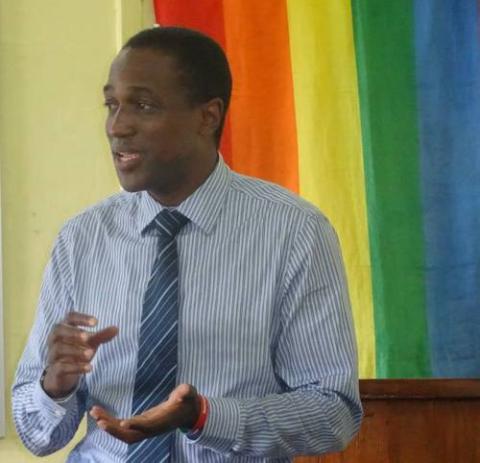 Maurice Tomlinson, a senior policy analyst with the HIV Legal Network, is pictured in a 2015 image. (Wikimedia Commons/Kimsae04)

Laws criminalizing gay sex are common in English-speaking Caribbean nations, according to Human Rights Watch, which said these laws, created by British colonial rulers, were initially imposed out of "racist stereotypes and colonialist fears of native sexuality."

The Human Rights Watch report revealed that LGBTQ people in Dominica and other English-speaking Caribbean countries are heavily stigmatized. Many participants in the study recounted stories of traumatic family rejection, bullying and exclusion from school, and verbal or physical attacks or even death threats.

"Every day, I fear for my safety living in this country because of my sexual orientation. I am alive but if anyone ever ... wanted to find out, they can kill me. … I am an easy target for anything," said one respondent from Dominica.

"The buggery and gross indecency laws say that we can't be ourselves. … These laws allow the negativity towards gay people to exist, the bigotry, [the] law allows people to insult and do anything [to us]," one 20-year-old gay man from Dominica told researchers.

The Catholic Church in Dominica plays a major role in shaping law and public opinion, Tomlinson said, in part because the nation is very small and isolated. The island has around 72,000 residents, according to the CIA World Factbook, of whom about 61% are Catholic. Nearly a third of the nation's residents live below the poverty line, according to the factbook.

With the help of their international partners, churches provide healthcare, education and financial support many residents rely on, Tomlinson said. Many of the nation's lawmakers and judges are devout Catholics, he said.

For that reason, the bishop's opinion matters, he said.

"His word is very powerful," Tomlinson said. "And he alone could push the judges to support decriminalization."

Malzaire did not respond to an email requesting comment on his decision to support the Sexual Offences Act.

Other Catholic officials in the region have condemned laws that criminalize gay sex. During a November conference on LGBTQ criminalization laws hosted by the HIV Legal Network, Bishop Gregory Alleyne of Georgetown, Guyana, spoke out against such laws in his country.

"There is no doubt in my mind that these laws in Guyana should be made null and void," he said, according to New Ways Ministry. He added that, in his experience, most other bishops in the region also supported removing the laws.

The Vatican has stated that it opposes criminal penalties against LGBTQ people. However, in 2008 it refused to sign on to a non-binding U.N. resolution against such laws because it objected to the terms "sexual orientation" and "gender identity" and parts of the resolution it said equated same-sex unions with heterosexual marriage.

Robert Shine, associate director of New Ways Ministry, an LGBTQ Catholic advocacy organization, has kept a timeline on the group's website of Catholic leaders' responses since 2009 to anti-LGBTQ laws.

He said the Vatican's statements on these laws have been "muddled" and therefore have not always translated to local bishops in places with anti-LGBTQ laws. While some church leaders, such as Cardinal Oswald Gracias in Mumbai, India, have spoken against their nations' anti-LGBTQ laws at great personal risk, others have stayed silent or actively promoted criminalization, Shine said. 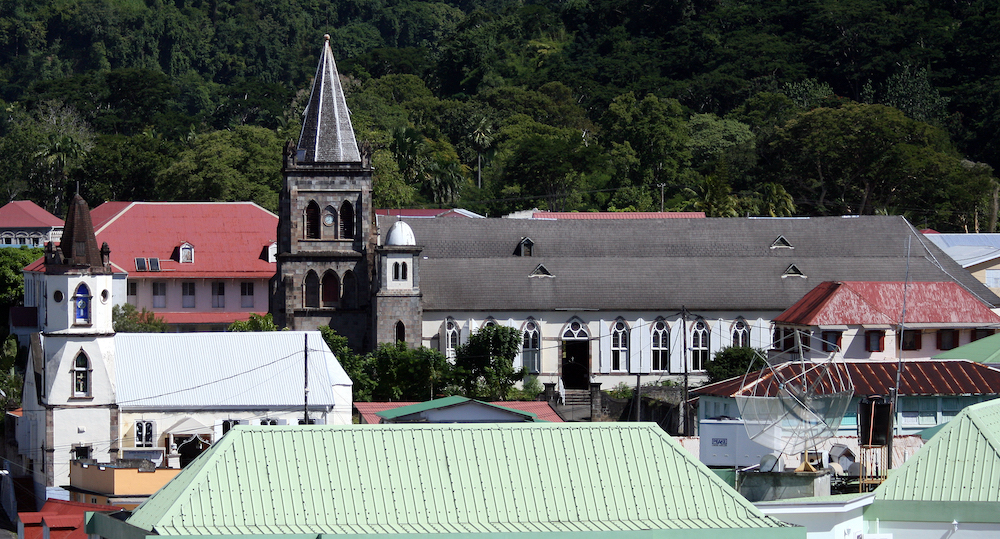 Churches in Roseau, Dominica, are pictured in a 2008 photo. Dominica is about 82% Christian, according to the Association of Religion Data Archives. (Wikimedia Commons/gailf548)

For instance, New Ways reported that in Uganda, bishops initially opposed, then supported, a bill that increased penalties for gay sex, as well as for "promoting" homosexuality. The act was passed but later nullified by the nation's Constitutional Court.

Similarly, Catholic bishops in Nigeria praised the president for passing laws that punished LGBTQ people who married with 14 years in prison, and criminalized those who run LGBTQ advocacy organizations, according to the Advocate, calling the legislation "courageous."

Bishops in other nations with anti-LGBTQ laws, such as Singapore, Tanzania and Malawi, have also praised such laws, according to New Ways. In Poland, where LGBTQ people are not criminalized, Catholic bishops have been part of a movement to curtail their rights and have advocated forcing LGBTQ people into "conversion camps," which a United Nations expert report deemed a violation of human rights.

LGBTQ advocates worldwide have asked Pope Francis to speak out against anti-gay laws and intercede on their behalf, Shine said.

In a conference on women's rights held in Rome in 2018, lesbian Catholic activist Ssenfuka Joanita Warry of Uganda spoke out against anti-gay laws and pleaded with Francis and other Catholic leaders to defend the dignity of LGBTQ people in places like Uganda where their lives are at risk, according to New Ways Ministry.

"Why is homosexuality still being criminalized in parts of the Catholic world?" Warry said during her speech. "How can two consenting adults who love one another over a long period of time be looked upon as criminals? Why does church leadership choose to stay quiet and not stand in defense of life!"

Tomlinson, who is Christian, said he's disappointed that Bishop Malzaire has joined in "advocating for the humiliation and degradation of humanity." He said he wants the "true church" to shine through in defense of LGBTQ people.

"The faith I believe in is a faith of Jesus Christ, which is, you always look out for the marginalized," Tomlinson said. "You're always loving your neighbor as yourself. You're looking for the person who is persecuted to lift them up, not to push them down."