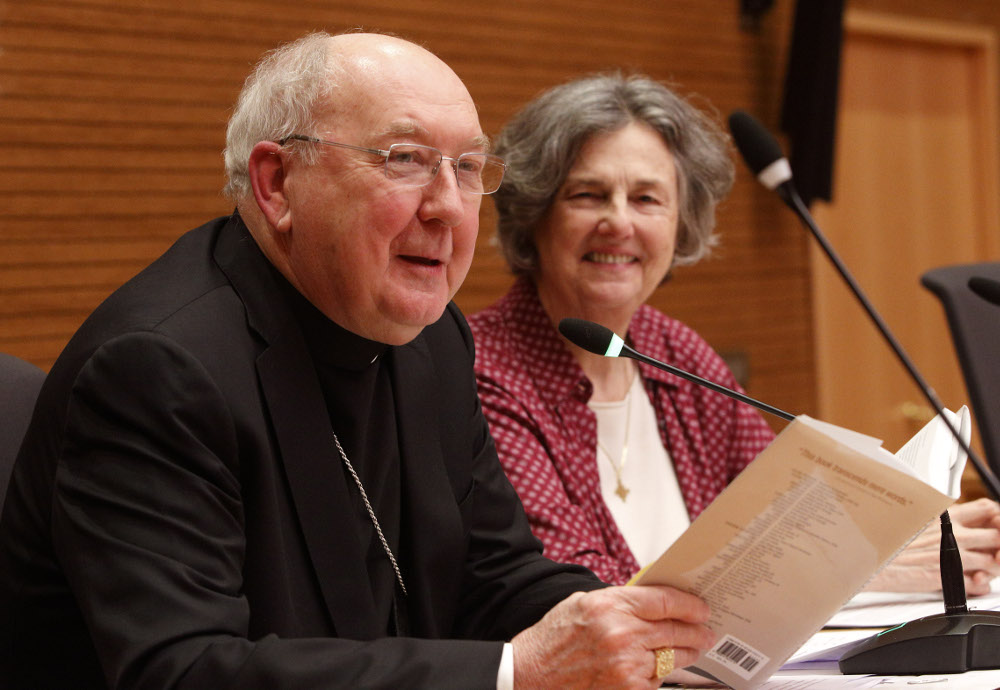 U.S. Cardinal Kevin Farrell, prefect of the Vatican's Dicastery for Laity, Family and Life, is pictured the presentation of the book, "A Pope Francis Lexicon," in Rome March 1. Also pictured is Phyllis Zagano. (CNS/Paul Haring)

The fuller participation of women in decision-making in the Catholic Church is a continuing process that still needs time, Cardinal Kevin Farrell said.

Speaking during a question-and-answer session in Rome March 1 after the presentation of the book, "A Pope Francis Lexicon," Farrell said that a greater role for women in the church "is going to take more than just issuing a decree."

"It's a question of changing a culture, and I believe that will take time, but I think that Pope Francis — more than anybody — has tried and continues to try and continues to bring about that change each and every day," he said.

Responding to a question regarding an essay written by Tina Beattie, a theologian, in which she noted the exclusion of women "from many offices of Catholic teaching," Farrell said the pope would not totally agree that "he has not tried and is not bringing women into positions of authority in the church."

Some dicasteries once led by cardinals are now led by bishops and priests and, thus, pave the way for more participation by laypeople, especially women, in church decisions, said Honduran Cardinal Oscar Rodriguez Maradiaga of Tegucigalpa, who also spoke at the conference.

"Every day, more and more, the presence of the laity is taking place," the cardinal said. "It's a process of changing the culture, but I can assure (you) it's taking place."

Rodriguez Maradiaga, a member of Pope Francis' international Council of Cardinals, also was a contributor to the book, writing an essay on reform.

Farrell also was asked about reports that he prevented a conference on women in the church, Voices of Faith, from meeting in the Vatican March 8, although the conference had been held for the past four years in the Casina Pio IV, a villa located in the Vatican gardens.

Organizers of the conference said they had to change locations after the cardinal rejected the participation of several speakers, including former Irish President Mary McAleese, an advocate of gay marriage and women's ordination.

Events held within the Vatican, Farrell explained, are "presumed to be sponsored by the pope" and people assume that "the pope is in agreement with everything that is said."

After being told "what the event was about, it was not appropriate for me to continue to sponsor such an event," he said.

However, Farrell said that while he could not sponsor the event, the church is "always open to listening and we are always open to dialogue."

"It would appear sometimes that we are not, but this is one case when I would say the circumstances don't correspond to what some people would like to make out that we don't want to listen," the cardinal said.