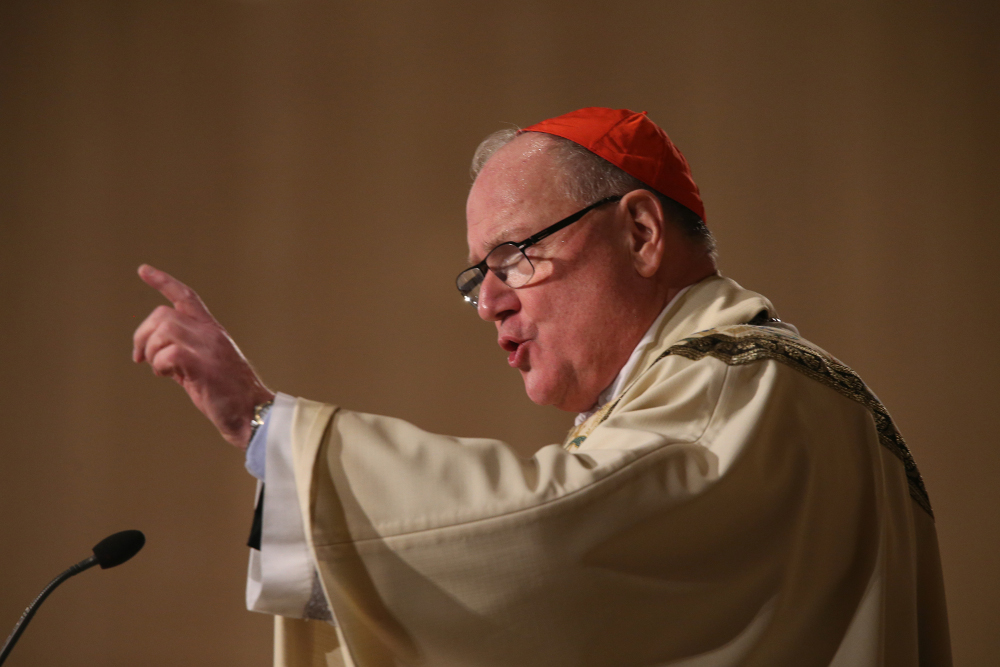 New York Cardinal Timothy Dolan, chairman of the U.S. bishops' Committee on Pro-Life Activities, delivers the homily during the opening Mass of the National Prayer Vigil for Life at the Basilica of the National Shrine of the Immaculate Conception Jan. 18 in Washington. (CNS/Bob Roller)

"The news that the Trump administration will be issuing new regulations to separate abortion from the federal Title X family planning program is greatly needed and deeply appreciated," New York Cardinal Timothy Dolan said in a May 18 statement.

"Abortion always takes the life of a child and often harms the mother, her surviving children, and other family and friends as well," said the chairman of the U.S. Conference of Catholic Bishops' Committee on Pro-Life Activities.

Other U.S. pro-life leaders around the country and several members of Congress echoed his remarks, prompted by the administration's release of the "Protect Life Rule" through the U.S. Department of Health and Human Services. After a period for public comment, the proposal will become final. Dolan said the USCCB will offer comments during that period.

In 1991, the U.S. Supreme Court ruled 5-4 the government had the right to establish rules funding only family planning programs which do not "encourage, promote or advocate abortion.'' When President Bill Clinton took office, he reversed the regulations

The Title X Family Planning Program was enacted under President Richard Nixon in 1970 as part of the Public Health Service Act.

Title X is the only federal grant program dedicated solely to providing individuals with comprehensive family planning and related preventive health services. It is funded every fiscal year by congressional appropriations.

"Most Americans recognize that abortion is distinct from family planning and has no place in a taxpayer-funded family planning program," Dolan said in his statement. "For too long, Title X has been used to subsidize the abortion industry. We need to draw a bright line between what happens before a pregnancy begins and what happens after a child has been created."

A January Marist poll commissioned by the Knights of the Columbus showed that a consensus of Americans across party lines want to see an end to taxpayer funding of abortion. Of those polled, four in 10 who identified themselves as "pro-choice" and more than four in 10 Democrats — along with the overwhelming majority of Republicans — hold this position.

In its original design, and reflected in current law, "there is a specific prohibition on abortion-related activities" being funded by Title X grants, the USCCB said in issuing Dolan's statement. "However, in the years since the program's creation in 1970, it has been interpreted to require grantees to refer for abortion, thus both overtly excluding health centers who object to such referrals from applying for Title X grants and also ensuring a direct link between family planning services and the promotion of abortion."

"This link," the USCCB added, "is exemplified by the alarming number of Title X recipients that also provide and promote abortion."

In other reaction, the Knights of Columbus said in a statement: "Today marks an important step in protecting the lives of unborn children in the United States. "Americans should not be forced to have their tax dollars fund abortion."

Fr. Frank Pavone, national director of Priests for Life, said President Donald Trump "again deserves the gratitude of the pro-life movement and all Americans for the 'Protect Life Rule' announced today to divert taxpayer money from the abortion industry and instead direct it toward those health centers that do not promote or perform the killing of children through abortion."

"The Reagan rule reinstated by the current administration finally creates a bright line of separation between abortion and family planning. Abortion is not family planning — in sharp contrast, the violence of abortion wounds families," said Rep. Chris Smith, R-New Jersey, who is Co-Chairman of the Congressional Pro-Life Caucus.

Smith was among more than 150 members of Congress called for the action on Title X in an April 30 letter to Health and Human Services Secretary Alex Azar. A couple weeks later a group of more than 200 members of the House and Senate said urged Azar not to institute reinstate the Reagan-era rules, calling it essentially a "gag rule" on "health care" providers.

But Smith and the other group of lawmakers said in their letter that Title X is in "dire need of review and updated regulations that ensure program integrity with respect to elective abortion."

"While the authorizing statute drew a bright line between family planning and abortion, the regulations governing the title X program have blurred that line by requiring all grantees to refer for abortion," the letter said.

"The separation between abortion and family planning has been further weakened by permitting Title X clinics to be 'co-located' within the same facility as an entity that provides abortion," it said.

"Co-located centers may be vulnerable to misuse of funds in support of abortion activities and send a message that abortion is considered a method of family planning in federally funded family planning programs."

The lawmakers also noted their "deep concern" that a recent report from the nonpartisan Government Accountability Office showed that between 2013 and 2015 Planned Parenthood, the nation's largest abortion provider, received $170 million from the Title X program.

"Planned Parenthood has described abortion as 'a necessary service that's as vital to our mission as birth control,' " their letter said. "It is time for the Title X funding stream for Planned Parenthood to be turned off."