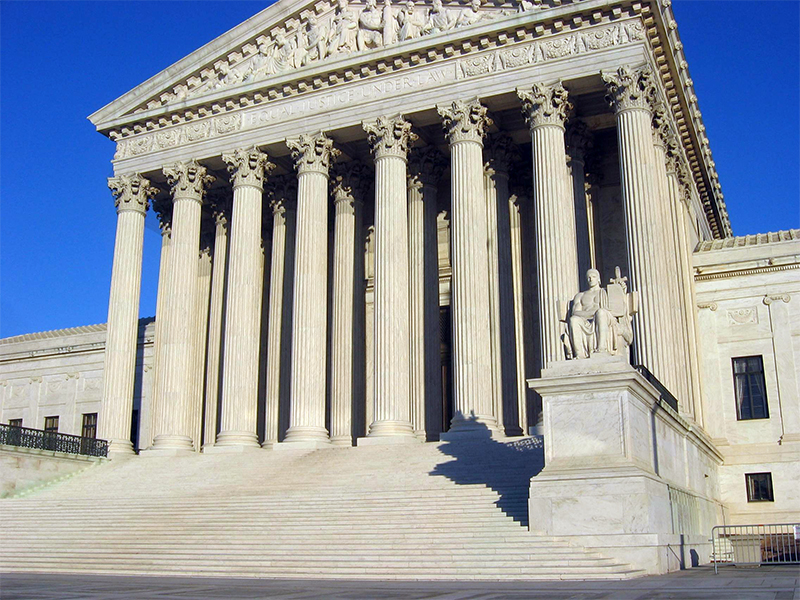 A general view of the U.S. Supreme Court building in Washington on Dec. 5, 2004. (Creative Commons/Duncan Lock)

U.S. Roman Catholic bishops are backing public sector unions in an upcoming Supreme Court case, pitting church leaders against the Trump administration and conservatives in a legal battle over how organized labor is financed.

In an amicus brief filed on Friday (Jan. 19) in the case of Janus v. American Federation of State, County, and Municipal Employees, the U.S. Conference of Catholic Bishops sides with the union, which is being challenged by the State of Illinois over its right to collect money from nonmembers for collective bargaining.

The bishops equated the effect of a ruling against the unions to the landmark high court decisions, Roe v. Wade and Obergefell v. Hodges, which respectively legalized abortion and same-sex marriage.

A judgment against AFSCME, the brief says, "would represent another unfortunate decision of this Court that marginalizes the voice of the bishops with respect to an important public policy debate by declaring their position to lie beyond the constitutional pale."

AFSCME, the nation's largest union of public employees, argues that it needs nonmembers to pay "fair-share fees" to manage the costs of representing all employees in collective bargaining, as they are legally allowed to do, according to the 1977 ruling Abood v. Detroit Board of Education.

The Trump administration's Office of Solicitor General and conservative groups including the Becket Fund for Religious Liberty have filed briefs in support of overruling the Abood decision, agreeing with the plaintiff that the fees are an infringement on free speech.

The bishops note their longstanding opposition to "right-to-work" legislation, which doesn't allow employees to be charged for union representation they didn't ask for, even if they might benefit from it.

In their amicus brief, the current bishops pointed to various papal statements and encyclicals in support of labor rights dating back to 1891's Rerum novarum, issued by Pope Leo XIII. Pope Francis is also cited in a footnote, specifically a June 2017 address in which he told delegates from the Confederation of Trade Unions in Italy, "There is no good society without a good union, and there is no good union that is not reborn every day in the peripheries, that does not transform the discarded stones of the economy into its cornerstones."

Despite this history, the latest brief is something of a shift: bishops did not file a brief in a case that dealt with almost the exact same issue roughly two years ago, Friedrichs v. California Teachers Association. President Barack Obama's U.S. Office of Solicitor General sided with unions in that case, which it resulted in a 4-4 stalemate a the Supreme Court in 2016 — just a few months after the death of Justice Antonin Scalia, who was expected to rule against the labor unions.