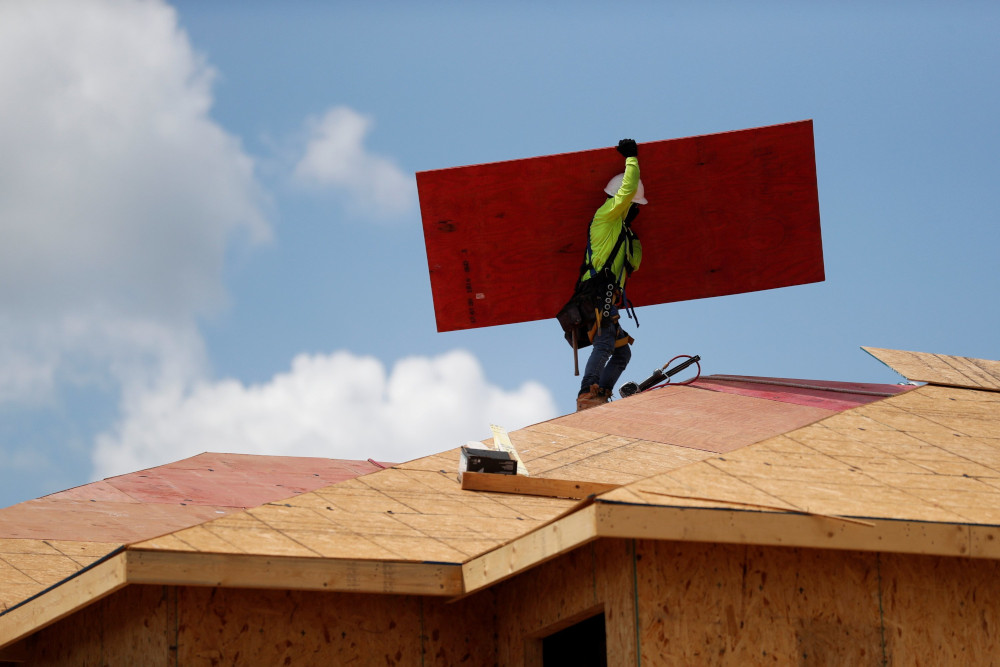 A carpenter works on building new townhomes in Tampa, Fla., May 5, 2021. (CNS/Reuters/Octavio Jones)

Three officials made their pitch to congressional staffers during an online briefing arranged by Catholic Charities USA June 23 on behalf of a growing number of people struggling in unsafe and unhealthy housing situations.

They said only a fraction of affordable housing needs is being met through their programs.

"When I think about the narrow band of people that are chronically homeless, that if we don't get them into housing with resources, the drain on the system," he said, "the cost to push them through a primary medical need or emergency room or the jail system or the legal system is astronomical compared to the cost to get them into housing with resources."

At the Archdiocese of Philadelphia's Catholic Housing and Community Services program that serves senior citizens, over 260 people applied for one of 46 apartments in a newly constructed affordable housing facility, said director Heather Huot. "That's 17%," she said.

The program, known as Section 202, funds construction, rehabilitation and acquisition of properties that can serve as supportive housing for seniors. It also provides rental subsidies for qualifying low-income seniors, including the frail, so that no more than 30% of their income is used for rent.

But funding for construction was halted by Congress in 2012 and it was only reinstated in the 2020 federal budget.

Huot and Reynolds advocated for funding to return to at least the $400 million to $500 million that was allocated nearly a decade ago.

Section 202 helps seniors to live independently while providing basic services such as cleaning, cooking and transportation, Reynolds told Catholic News Service prior to the briefing.

The federal fiscal year 2020 budget allocated $150 million for the program, and the federal Department of Housing and Urban Development in May began seeking applications from nonprofit organizations to receive funds. HUD estimated that about 45 projects would be funded.

Reynolds said his agency applied for funding for a 75-unit housing project. "The bigger issue is even at $150 million, it falls short of the [nationwide] need," he said.

Huot told CNS rental subsidies under Section 202 are often overlooked as a viable tool for seniors living on fixed incomes that are squeezed when rent costs increase.

"There's a misperception out there of what a senior who needs affordable housing looks like. The reality is the majority of seniors who live in our buildings worked in industries, worked in the trades, maybe they were a police officer. They had a full life of contributing to the community and now need some support to meet their needs," Huot said.

The Catholic officials also advocated for increasing the federal low-income housing tax credit. Reynolds told CNS the credit has led to the development of the highest number of affordable housing units during the past three decades.

The program gives state and local agencies the authority to issue tax credits for new construction, acquisition and rehabilitation. HUD reports that more than 106,000 units were placed in service annually between 1995 and 2018 because of the credit.

Other issues the officials raised included the need for counseling services addressing housing to help people prepare to live in a stable setting and establish personal budget priorities for costs such as rent.

In addition, Reynolds called for HUD officials to review housing policies developed in the mid-20th century that have contributed to "de facto segregation."

"The realistic opportunity for lower-income people and minorities in particular to access reasonable opportunities in higher income communities just doesn't exist," he said.

"I think that while HUD has addressed this issue partially ... one of the things they haven't done nationally at a policy level," he continued, "is take affirmative steps to ensure not only that we are not furthering discrimination and patterns of housing segregation, but we're actually going out and providing opportunities to allow folks to reverse these trends."

He encouraged a review of where affordable housing projects are developed so that people of color and low-income families have the opportunity, if they choose, to move into communities with better schools, improved safety and better access to transportation.