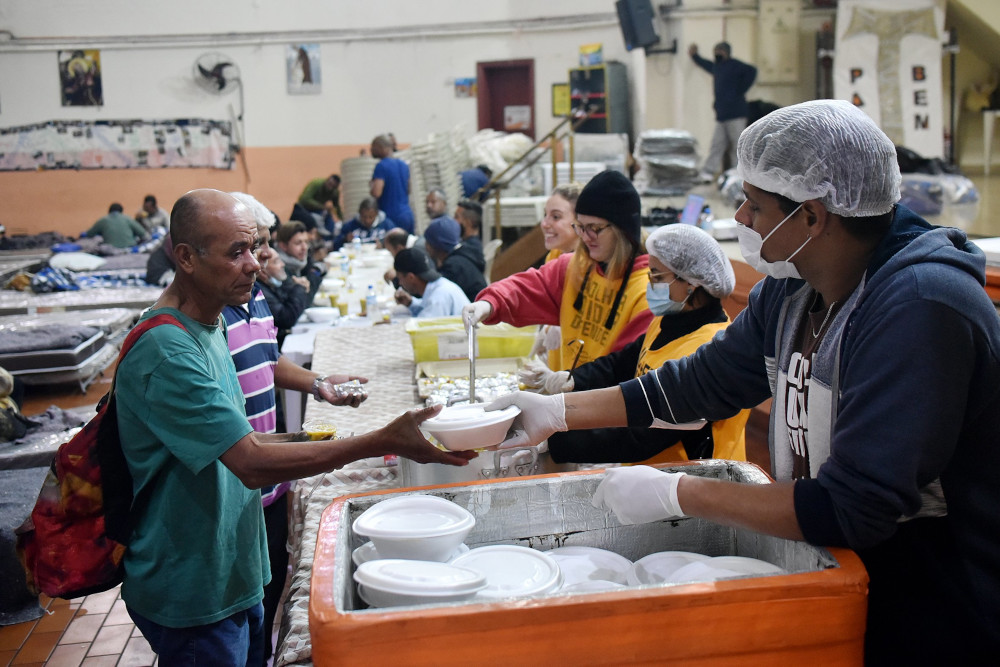 Franciscans in São Paulo serve meals to the homeless and hungry to Brazilians in a shelter May 19, 2022. One Franciscan social services coordinator said food security policies in the country have been scrapped under the current government. (CNS photo/Luciney Martins, courtesy SEFRAS, Franciscan Solidarity Service)

Looking through the lens of Catholic social teaching, several Brazilian organizations were critical of actions by President Jair Bolsonaro, who faces former president Luiz Inacio Lula da Silva in the final round of presidential elections Oct. 30.

Several groups signaled that the current administration has dismissed or reduced many social programs that, in past years, extended rights to some of Brazil's marginalized groups and furnished relief to the country's poorer people.

Those interviewed said no matter who wins, Brazilians know that the next four years will not be easy.

"Today, there is a structured, angry, and mobilized opposition against any type of social advances in Brazil. The next government will have to take the time to rebuild the Brazilian state," Antonio Eduardo de Oliveira, executive secretary of the Brazilian bishops' Indigenous Missionary Council, or CIMI, told Catholic News Service.

A document published in mid-October and signed by 16 entities -- including the Conference of Religious of Brazil, the bishops' Pastoral Land Commission and Indigenous Missionary Council and Caritas Brazil -- criticized many positions taken by the current government.

For these entities, Bolsonaro's actions in favor of firearms, his manipulation of religions, his destructive environmental policies, and his actions in dealing with issues related to young people, women, Blacks, LGBTQ people as well as Indigenous communities "compel us to take a stand against his reelection, in order to be consistent with the social doctrine of the Catholic Church and with the Gospel of Jesus."

Fr. Dario Bossi, provincial superior of the Comboni Missionaries in Brazil and a member of the Pan-Amazonian Church Network, REPAM, agreed with the document.

"The level of impunity and violence in the Amazon increased considerably, as did the rate of deforestation and fires, during the four years of Bolsonaro's government, which defended the interests of agribusiness and mining in the Amazon," said Bossi.

He said if Bolsonaro were reelected, these positions would be consolidated "in a disastrous way and with no chance of recovery for the Amazon and its peoples."

Bossi said that during Lula's first two terms (2003-2010), the government made some bad decisions related to the Amazon region and "did not listen to the peoples of the Amazon." He said he hoped if Lula were elected, he would handle things differently.

"Lula has demonstrated, in numerous speeches, an evolution (in thinking) regarding ecology, energy and development in the Amazon, stressing a commitment to zero deforestation in (the) Amazon and declaring himself against mining on Indigenous lands," said Bossi.

Oliveira said that when Bolsonaro was first running for president, the candidate said he would not demarcate even a millimeter of Indigenous land if elected. He kept his word.

"He extinguished the National Food Security Council (CONSEA), and this had a huge impact, because the council monitored public policies on food. Food security policies in the country have been scrapped," he said.

"Brazil is making billions exporting food abroad, while people don't have enough to eat within our borders. More than 36 million go hungry here in Brazil," he said.

With so many programs being emptied out, Paes said civil society has had to take the lead to fight the rising wave of hunger during the pandemic.

During the pandemic, the organization joined other social movements to fight hunger.

"We ran a campaign showing that in these elections it was important for people to think about voting against hunger and thirst," he said.

For Paes, the continuation of the Bolsonaro government will mean the maintenance of a policy that generates hunger.

"Today, the only program that responds to our concerns is that of the Lula government for its commitment to the fight against hunger and the plan that he carried out in his first mandates and that still survives today," said Paes.

Those interviewed said civil society should not let its guard down, no matter who leads the country in the next four years.

"No matter who wins, Bolsonaro or Lula, we will continue with our same mission -- we will continue to fight for the rights of Indigenous peoples in Brazil. That won't change. We will always be with them," said Oliveira.