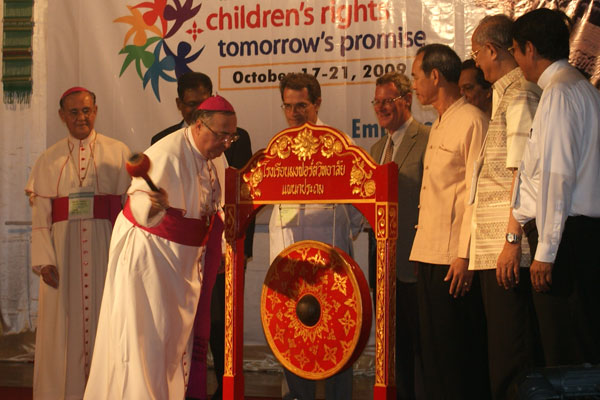 CHIANG MAI, Thailand -- At the opening session of the congress for the World Catholic Association for Communication, or SIGNIS, Oct. 18, Augustine Loorthusamy, a layman from Malaysia and long-time Catholic communicator, asked participants, including the apostolic nuncio Archbishop Salvatore Pennacchio and members of Thailand's bishops' conference, to reassess the church's commitment to communication.

He certainly got everyone's attention.

Loorthusamy, who is the president of SIGNIS, praised previous efforts when some "bishops, priests and religious" took a "hands-on approach and provided both spiritual and material support for the communications apostolate. There has been training and looking after lay professionals who have become a mainstay in this profession." Now he says that commitment has wavered. Many bishops, rectors of seminaries and religious superiors are "still not too enthusiastic about communications despite the number of church documents and pastoral instructions encouraging such activities as a priority."

Noting that communications is often the first thing to be eliminated when budgets are cut, indeed "the order of the day," Loorthusamy described lethargy regarding communication and the "irony that even as the pope and the Pontifical Council for Social Communication continues to push the communication agenda, the response out there in many places in the world has been lukewarm."

HE told congress participants that we need to understand this reality if the ministry of communication is to contribute to a Church that is compassionate, engaged in the world, and in dialogue with the world to build a culture of peace.

About 660 participants from 70 countries have gathered in Chiang Mai, Thailand, for the Oct. 17-21 World Congress of SIGNIS. The congress theme is "Media for a Culture of Peace: Children’s Rights, Tomorrow’s Promise".

Loorthusamy challenged attendees to be involved in a "caring reexamination" of where Catholic communications is heading.

The reality that Augie -- as he is known to veteran SIGNIS members -- highlights is well-known to U.S. Catholic communicators. Beginning in the mid-1990s, if not earlier, the phenomenon of communications being the first ministry cut (whether a communication office or the audio-visual resource libraries of catechetical offices) is well known.

My own efforts to promote a communications syllabus within at least one major seminary a few years ago was met with the groan, "We get so many mandates from Rome [speaking of the 1986 call for basic training in communications to be included in all seminary formation world-wide]; there is no way we can include more subjects. This is just one more thing."

The USCCB's 2005 National Directory for Catechesis calls for five communications and media elements to be integrated into catechesis and evangelization: critical reflection on media (media literacy), media as the subject of catechesis, use of media in catechesis, diocesan catechetical/evangelization productions, and advocacy (see Chapter 10). I laud this document but I wonder how each diocese is implementing it (I know that some are, and the National Association of Catechetical Media Professionals is to be commended for promoting these elements. I am a member so I can speak of authentic commitment of this small, vibrant, group.)

SIGNIS was formed in 2001, a merge of Unda, the world association for Catholic radio and television professionals, and O.C.I.C., the international Catholic organization for cinema. Both organizations were founded by laymen in Brussels, Belgium, in 1928. The International Union of the Catholic Press, or U.C.I.P, declined to join the merger.

The U.S. affiliate of SIGNIS (www.SIGNIS.net) is the Catholic Academy for Communication Arts Professionals, www.catholicacademy.org. U.S. participants at the SIGNIS conference in Chiang Mai are Larry Rich (Maryknoll Productions), Sherry Brownrigg (Catholic radio professional), Frank Frost (Frank Frost Productions), and me, Sr. Rose Pacatte, Pauline Center for Media Studies. Two Canadian members are present as well and we will have a "continental" SIGNIS meeting this week, too.

The theme of the SIGNIS world congress is "Children's Rights; tomorrow's promise." More than 300 delegates from 62 countries, and 100 children, are also participating, Youth from Asian countries make up the SIGNIS video journalist team and are producing a video each day featuring congress highlights.

The first day's presenters focused on a Brazilian project, Pastoral Care for Children, that is now in 19 countries and emphasizes health, education, and citizenship, as well as the spiritual development of the child. The program's founder, a pediatrician and mother, Zilda Arns Neumann from Brazil, described the success of the community-based multi-faceted effort noting that human rights are children's rights. Preventable infant and child mortality, as well as growing cases of abuse and violence and the phenomenon of child soldiers, was a consistent theme throughout the opening presentations as well

The afternoon's sessions provided a panorama of media and children across Asia. The cycle of violence, poverty, lack of education, and inappropriate media or media that is not child-friendly, was reinforced throughout.

The day was a balance and counter-balance between good news and bad news, promise, hope, and challenges regarding the communication apostolate of the Church.

This is about my 8th international Catholic communications conference since I became involved in Unda-USA in 1988 (now the Catholic Academy, see above.) It's very good to meet the pillars of world Catholic communications as well as newcomers such as young Catholic lay women, Winifred Loh and Theresa Khoo of Singapore, present for the first time (these ladies are also members of the Association for Pauline Cooperators, dedicated to evangelization with media and connected to my own congregation in Singapore.)

Watch this space as we the Congress continues and pray for us that we may find a way forward for world Catholic communications for our church.

Is communication still central to the Church?

Or on my Facebook page Sr. Rose Goes to the Movies