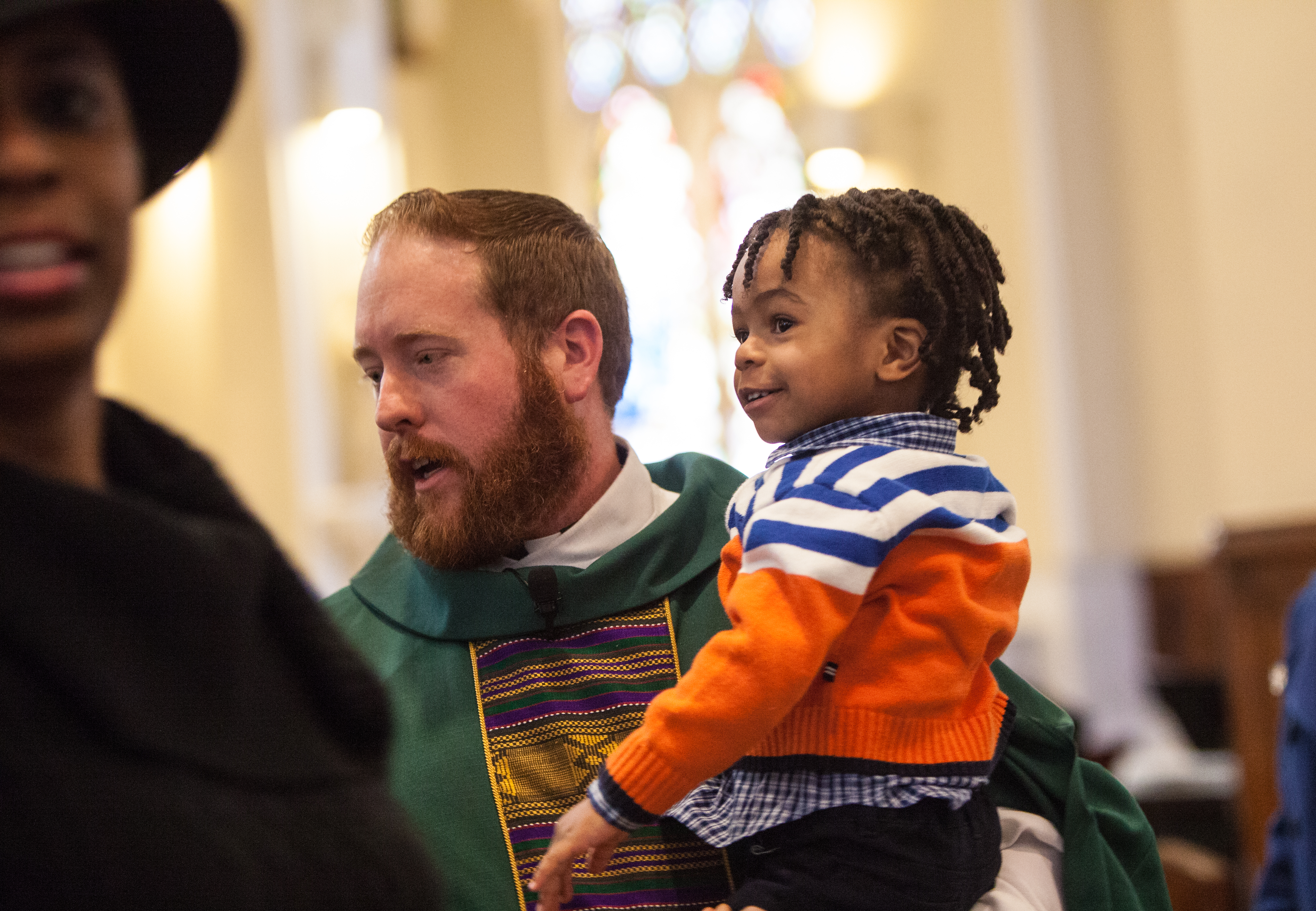 Father Matt O'Donnell, pastor of St. Columbanus Parish on Chicago's South Side, meets parishioners after a recent Mass. He is the 2018 recipient of the Cardinal Bernardin New Leadership Award from the U.S. bishops' Catholic Campaign for Human Development. (CNS/courtesy Natalie Battaglia)

A year into his priesthood, Fr. Matt O'Donnell was named a pastor.

Days before his 27th birthday in 2013, O'Donnell arrived at St. Columbanus Parish in Chicago's South Side Park Manor neighborhood and since then has embraced his ministry to the African-American community.

It didn't take long for the young priest who grew up at St. Fabian Parish in the Chicago suburb of Bridgeview to become a leading figure in the neighborhood.

O'Donnell, now 31, went about getting to know residents and parishioners and learning what they thought the community needed. From that, O'Donnell recruited volunteers in spearheading the creation of a variety of services and ministries that has cemented St. Columbanus as an anchor in Park Manor.

For starters, there's the parish food pantry that serves more than 500 people 49 of 52 Wednesdays a year, the building of a new playground that gives kids a safe space to be kids and an athletic center that gives older kids an alternative to gang life. The parish also is the site of Augustus Tolton Catholic Academy, an acclaimed elementary school focusing on science, technology, religion, engineering, arts and math.

The parish opens its doors to the wider community, hosting its popular "Pop Up Clergy" program from time to time in front of the church, complete with a grill for barbecuing. The event brings neighbors and police together to foster friendship and understanding. The most recent in early May attracted 150 people.

"The people (at the parish) are very grateful that I'm young and have inexhaustible energy," he told Catholic News Service.

For his efforts, O'Donnell was named the 2018 Cardinal Bernardin New Leadership Award by the Catholic Campaign for Human Development, the U.S. bishops' domestic anti-poverty and social justice program.

The award is to be presented June 13 at a reception during the spring assembly of the U.S. Conference of Catholic Bishops in Fort Lauderdale, Florida.

Chicago Cardinal Blase Cupich in a statement called O'Donnell's work of building a parish "a living example of Pope Francis's vision of a field hospital church that exists to serve humankind and spread the Gospel of a loving God."

"By his caring presence, his limitless energy for good works and his compassionate ministry, he has made St. Columbanus a beacon of hope in its community and an example of faith in action far beyond its borders," he said.

In nominating O'Donnell for the award, Olivia Silver said she wanted to call attention to the "good things that were happening at the parish and the good things that Father Matt was doing."

Silver, a member of Chicago's Holy Name Cathedral and a St. Columbanus volunteer, called the priest an "innovative pastor who gives his entire heart to his parish, his community and his loved ones."

"He is doing such great stuff there," she said.

O'Donnell takes little credit for the parish's accomplishments, citing instead parish staff for the success of the many ministries. He said he strives to "empower the people in the parish to take the responsibility to run the different aspects of the ministry that we have."

And he thanked parishioners for being "forgiving and patient with me."

O'Donnell also credited the "good priests around me to give me on-the-job training" in the work of a pastor.

The young priest has long held an interested in serving in the African-American community. His internships before ordination were in other South Side parishes where he "fell in love with the liturgy, the music, the preaching" and discovered that the hospitality of the neighborhoods was "very giving."

A period spent at the Institute for Black Catholic Studies at Xavier University of Louisiana in New Orleans strengthened his desire for his chosen ministry.

That interest convinced then-Cardinal Francis George to appoint O'Donnell as pastor. "Cardinal George said he would rather have me because I have the desire to serve the black community than to have somebody who had more experience but didn't have the desire,"  O'Donnell recalled.

As for the future, O'Donnell has eyes on opening a community service center to help residents prepare for the GED test and apply for work. He has even thought of opening a coffee shop "to create some jobs in the area."

The priest acknowledged Park Manor is going through changes, like many other Chicago neighborhoods: longtime residents have either moved away or died; violence has increased; locally owned businesses have closed; and poverty is growing.

Such factors motivate O'Donnell to do his best while partnering with others interested in building an inclusive, welcoming community.

"St. Columbanus has been here since 1909 and has been an anchor in in Park Manor," he said. "We're trying to figure out what more we can be doing to better the life of the neighborhood."