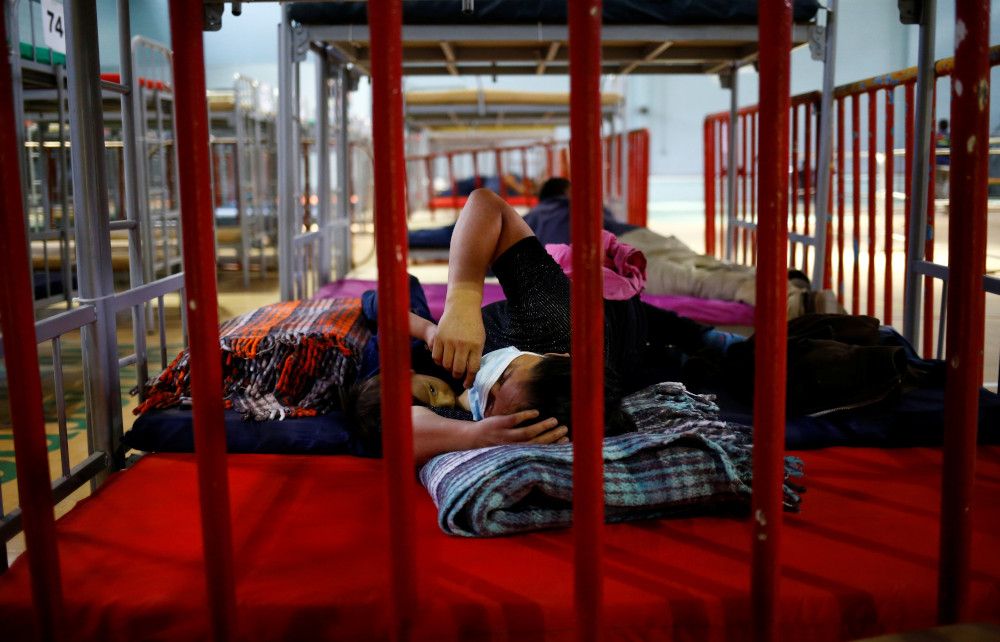 Prayers, the kind only a child can make, were on display on a table of pleas written by migrant children near a small statue of Our Lady of Guadalupe, as bishops from the U.S., Mexico and Central America gathered June 1 in Mundelein.

The prelates came together for the first day of an emergency meeting on immigration at Mundelein Seminary outside of Chicago.

"Dear God, I ask you that you help me get out of here and that you take care of my mom," read a note written in Spanish by a child in a tent camp, a note collected by Bishop Mark J. Seitz of El Paso, Texas, who joined more than 20 bishops, along with Vatican representatives and leaders of Catholic organizations for an unprecedented gathering June 1 and 2.

The meeting, with probably the largest group of representatives of the U.S. Conference of Catholic Bishops that has met in person since the COVID-19 pandemic began, seeks to craft a welcoming response to immigrants by Catholic Church members in their respective dioceses in the U.S.

At the same time, the attendees are trying to understand what causes migrants to leave their home countries so they can better advocate for them.

The meeting also has taken the extra step of involving bishops from Central America and Mexico who were invited as a way of seeking collaboration from the church in the region.

"Let us see how we might come together across borders, collaborating across our different roles, responsibilities and ministries, raise anew the moral voice of the church with decision makers at this critical time in defense of the rights and dignity of those who are forced to flee," said Seitz during an opening session June 1.

"This is a defining moment for us. This present moment invites a bold response from the church, grounded in the spirit and in fidelity to the Gospel," he said. "No more than we can close our eyes to the evil of abortion, can we close our eyes to the suffering of our immigrant brothers and sisters and the disregard for their human rights."

"We need to find a path forward that is rooted in solidarity and fraternity and that respects the rights and dignity of every migrant as a child of God made in his image," said Gomez.

"So, as we reflect, I'm sure we're going to see that we cannot be indifferent to the sufferings of the immigrant, the refugee or anyone else in need. ... We have the duty to take care of one another, to weep with those who are weeping and to lift up those who are falling."

The meeting also brought together the heads of major Catholic organizations and nonprofits in the country that have responded to the plight of migrants.

In addition, the meeting was attended by many members of Hope Border Institute, which worked on bringing the group together. 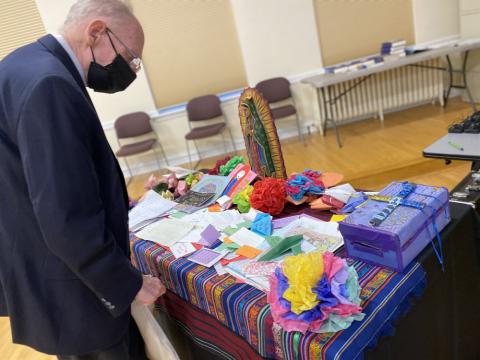 Bishop Guido Charbonneau of Honduras looks at notes written by children in detention camps during a break June 1, 2021, at Mundelein Seminary outside of Chicago. (CNS photo/Rhina Guidos)

Charbonneau stopped by to look at the table filled with the children's prayers, including many that spoke of their longing to see their parents, particularly their mothers.

"We can't ignore this reality," he told Catholic News Service June 1, adding that immigration, among so many immediate problems that Central America faces, is a topic that gets overlooked.

In his diocese alone, the population faces displacement from climate change — people are leaving because the crops they once planted no longer yield enough to survive because of drought. The region also has become a drug corridor, bringing with it violence and increased corruption.

Many say that Honduras has in essence become a "narco-state," he said, with the government doing little to stem migration because if people leave, at least they send money home, which keeps the economy afloat with remittances.

Dorsonville, chairman of the USCCB's Committee on Migration, said he hoped for better communication and cooperation with the region's bishops because just as people have the right to migrate, they also have the right to be able to remain in their home countries.

In his homily at the opening Mass before the meeting, Cupich asked prelates to also consider how to be able to carry the messages gathered from the meeting to their respective regions because the help of other dioceses around the U.S. would be needed to give people on the move the welcome they deserve.

He also urged cooperation with government officials to work on the issue.

"We, too, have to respect them. We, too, have to think the best of them, and yet, at the same time, not allow ourselves to be disgruntled, not expect the worst, even when they disappoint us," he said.

The meeting comes days before U.S. Vice President Kamala Harris heads to Mexico and Guatemala for her first foreign trip, an important one as the administration seeks greater cooperation in rooting out corruption in the region in an attempt to address some of the ailments that lead people to leave their home countries.

Seitz said that society, including the government, was looking to the church to provide a moral compass in facing the challenges immigration presents.

"I believe there is an opportunity to set aside old failed ways of responding to migration with barriers and weapons of war," he said. "It is time to seek new pathways and understandings of the place of migration within the human story."

"It is time to recognize migrants not as interlopers and intruders," he said, "but as people who reveal the face of Christ in their love and courage and who enrich us by their presence."