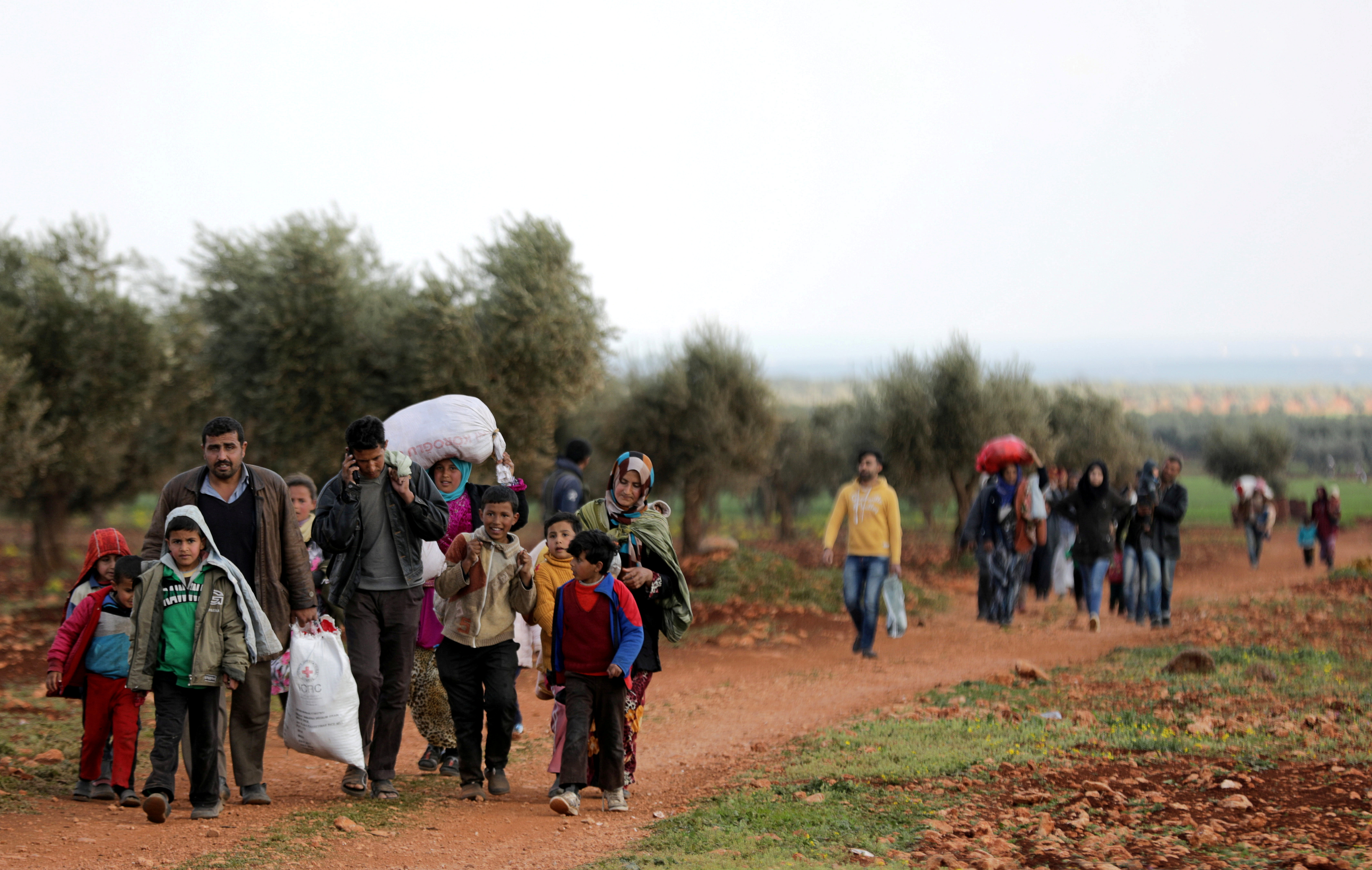 Internally displaced people walk with their belongings in Afrin, Syria. Jihadists fighting with Turkey are hunting down religious minorities to kill them in Syria's northwest, Christian activists warn, as Turkey and its militant allies have encircled the Kurdish-held town. (CNS/Khalil Ashawi, Reuters)

Jihadists allied with Turkey are hunting down religious minorities to kill them in Syria's northwest, Christian activists warn, as Turkey and its allies have encircled the Kurdish-held town of Afrin and are relentlessly pushing through.

Turkey is using hardline jihadist proxies, including Islamic State and al-Qaida militants, to eliminate the presence of Kurds and other ethnic and religious minorities along its border, the activists said.

"The situation is dire. They feel desperate. They are crying out to God every hour," humanitarian Charmaine Hedding told Catholic News Service. Hedding directs the Shai Fund, a Christian aid organization that provides humanitarian supplies to Afrin's citizens.

"The jihadist militants consider Yezidis 'infidels,' while there have been announcements made that if you kill Christians, you will go straight to paradise," she said. Hedding referred to her conversations on a satellite phone March 15 with Christians and Yezidis trapped in Afrin, saying cell phone service had since been cut.

In New York, UNICEF said "reports from inside Afrin indicate that dozens of children have been killed and many more injured since the start of hostilities in the district."

"The suffering of the poor people is immense, enormous. Suffering of the civilian population and the children is so great. I don't know when this war will end. The end is not close, unfortunately," Zenari told Catholic News Service by phone March 16.

"The war is very, very complicated. And every year brings a new chapter. It becomes more complicated with more suffering for the poor people," he said. "In Syria, it is a massacre of the innocent, because rockets and bombings on the cities hit, above all, those who are at home, that is, women and children."

Christians and Yezidis in Afrin have an additional worry of being attacked and killed by Islamist militants working on Turkey's behest. Afrin, some 30 miles from Aleppo, is controlled by the Kurdish People's Protection Units, or YPG, and is bordered to the north and west by Turkey and south by government-controlled Syrian territory.

Hedding said a Yezidi man from the Afrin area told her, "When the Turks and their proxy forces went through Yezidi towns, they destroyed all the Yezidi temples, desecrating the houses of worship."

"No one can move in and out of the area, because of the Turkish drone bombardments. Everyone must stay put and in hiding. Stores are not open, and there is no access to food or water," Hedding said. Access to clean drinking water stopped after Turkish and jihadist fighters seized the main dam and water plant from the Kurds.

"Many war crimes have occurred. They're documented by both residents and by gloating Turkish fighters," the Anglican lawyer told CNS and the Washington-based stream.org.

Some media reports said 10,000 people from Afrin had managed to escape. But Afrin's population had grown to 1 million as internally displaced Syrians fled there from other conflict-ridden Syrian towns.

Although "the Kurdish-led forces are trying to fight, they are greatly underpowered," Hedding said, noting they face the advanced warplanes, tanks, artillery and other heavy weapons of NATO's second-largest standing army, Turkey.

Homer said Turkey has 673,000 soldiers, and another 20,000 radical Islamist fighters, veterans of Islamic State and al-Qaida affiliates. Afrin's defenders possess no weapons or ground forces sufficient to stop the assault.

The Syrian Democratic Forces -- which includes Kurds, Christians and others -- were forced to divert many of their troops to try to defend Afrin, she said.

"They left Eastern Syria, where they were on the verge of crushing ISIS. That area is now vulnerable to an ISIS comeback, or to conquest by the Assad regime, or Russian and Iranian armies," Homer explained. She said this jeopardizes the victory the U.S.-led military coalition has had over Islamic State in Syria.

Kurds and Christians created a nonsectarian, pluralist, inclusive government system in northern Syria in which there is religious freedom and equal rights granted to all, regardless of a person's ethnicity, religion or gender. This, too, is under threat by Turkey's invasion, activists say.

Observers said so far, the United States military seems to be doing little to protect its Kurdish and Christian allies in northwestern Syria, who are largely credited with eradicating Islamic State from the area as part of the U.S.-led military coalition.

Homer and other activists called on the U.s. government to stop the onslaught before it is too late. Turkish President Recep Tayyip Erdogan has ignored a Feb. 24 U.N. Security Council resolution requiring a cease-fire by Turkey in Afrin.