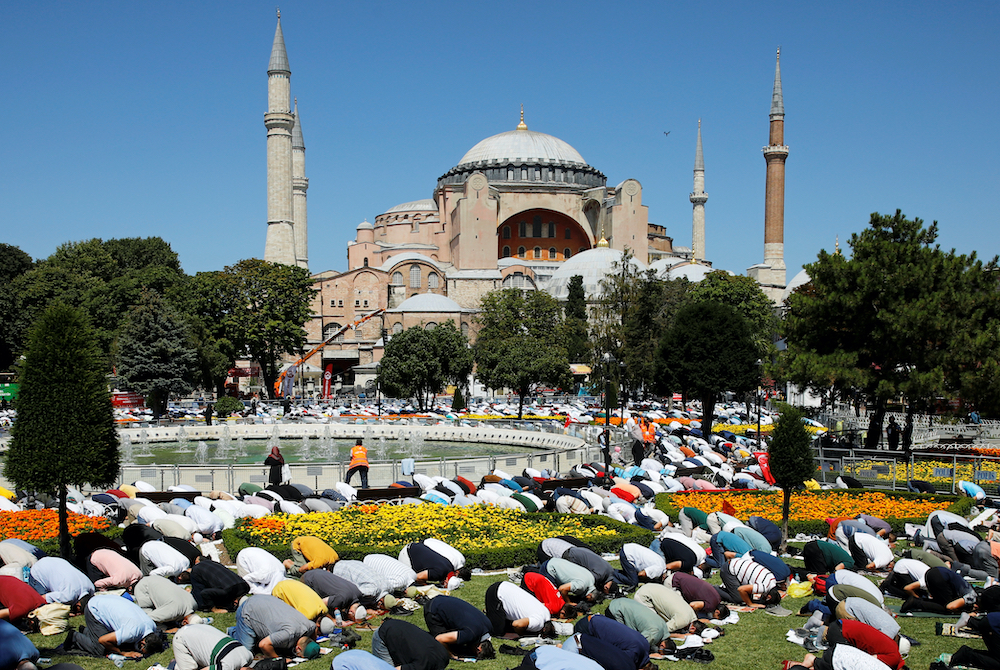 Muslims attend Friday prayers outside Hagia Sophia Grand Mosque in Istanbul July 24. Hagia Sophia was built as an Orthodox Christian cathedral and stood as the seat of Eastern Christianity for a thousand years before Ottoman Turks conquered its host city and turned it into a mosque in 1453. In 1934, it was designated as a museum revered as a symbol of Christian and Muslim unity until being transformed back into a mosque in July. (CNS/Reuters/Umit Bektas)

When one of the world's greatest churches was reopened as a mosque on July 24, despite international protests, there were predictions of a new downturn in Christian-Muslim ties.

Yet Turkey's Christian minorities have been guarded about the handover of Hagia Sophia — now called Hagia Sophia Grand Mosque — with some suggesting the move may not prove quite so damaging.

"It's necessary to wait till the consequences of this decision become clearer — for now, there's nothing to add," Rinaldo Marmara, spokesman for Turkey's bishops conference, told NCR.

"A breach has certainly been opened up for the possible recovery of buildings belonging to our own church, and we'll be looking at this problem afresh. But we're dealing not just with legal questions, but with a complex historical process."

Founded as the world's largest church by Emperor Justinian I in 537, Hagia Sophia ("Holy Wisdom") was used as a mosque for five centuries after the Turks captured Constantinople, renaming it Istanbul, in 1453, before being turned into a museum in 1934 by modern Turkey's secularizing founder, Mustafa Kemal Ataturk.

Plans to rededicate it for Muslim worship, long hinted at by Turkish officials, were confirmed in May by President Recep Tayyip Erdogan, and given final go-ahead on July 10, when Turkey's supreme court overturned Ataturk's 1934 decree.

Defending the conversion, Erdogan insisted it was a matter of national sovereignty for Turkey, most of whose 84.3 million inhabitants are Sunni Muslims.

However, opponents accused Erdogan, who gained sweeping new powers after his June 2018 reelection, of pandering to Islamist feeling and seeking popularity for his governing Justice and Development party, the AKP, amid economic hardships exacerbated by the coronavirus.

Istanbul, a city of 18 million, had plenty of mosques already, the critics said, including a massive new Camlica Mosque, Asia Minor's largest, completed last year with room for 63,000 people.

The Byzantine landmark Hagia Sophia ("Ayasofya" in Turkish), overlooking the Bosphorus strait, was admired during Istanbul visits by Popes Paul VI, John Paul II, Benedict XVI and Francis, but has been viewed with special fondness by Europe's Orthodox churches.

Not surprisingly, its appropriation was condemned by the Istanbul-based Orthodox Ecumenical Patriarch, Bartholomew I, who cautioned June 30 that the move would cause "confrontation and conflict," and "fracture two worlds," while disappointing "millions of Christians around the world."

Meanwhile, the Middle East Council of Churches branded the Turkish move an "assault on religious freedom," countermanding three decades of interfaith dialogues, and urged the United Nations and Arab League to intervene.

The Geneva-based World Council of Churches told Erdogan its 350 member-denominations also felt "grief and dismay" at a development that would encourage groups seeking "to overturn the existing status quo and promote renewed divisions."

The director-general of UNESCO, Audrey Azoulay, whose organization declared Hagia Sophia a World Heritage Site in 1985, said the basilica, which attracted 3.7 million visitors annually before COVID-19, had been "a unique testimony to interactions between Europe and Asia over the centuries," and regretted its handover had been made "without any form of dialogue or prior notice."

The move was also criticized by the U.S. and 27-country European Union, with Greece's Culture Minister, Lina Mendoni, denouncing it as an "open provocation against the whole civilised world."

Having initially been criticized for failing to react, the pope said in a July 12 Angelus message he too had been "very saddened," while Greece's Bishops Conference said it had warned Erdogan in a letter that his "big mistake" would spur "division and conflict among peoples."

Other Catholic leaders spoke out as well, with the Brussels-based commission representing the EU's bishops, COMECE, deploring the move as a "blow to inter-religious dialogue."

So did prominent Muslims, despite Turkish claims that the Hagia Sophia conversion had gained their enthusiastic backing.

Egypt's Grand Mufti, Sheikh Shawki Allam, was reported as branding the conversion illegal under Islamic law, while several Muslim theologians condemned it as a divisive political act that would humiliate Christians. 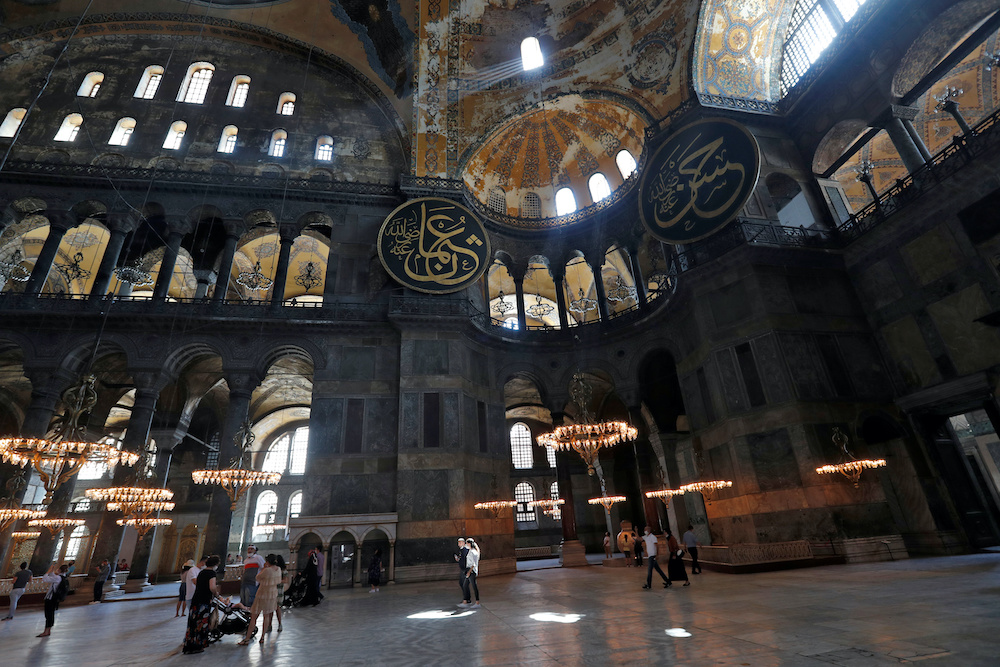 Life as a mosque again

Visitors to the Ayasofya Grand Mosque, whose outbuildings include the tombs of five early modern sultans, will certainly find a changed atmosphere.

Women will have to be veiled, entering via separate entrances from men, while Turkey's High Council on Religious Affairs has called on all Muslims to give the mosque support.

However, although its ancient Byzantine mosaics of angels, saints and the Virgin and Child will be screened or darkened during Muslim services, the council has said they need not "constitute an obstacle for establishing prayers there healthily."

Nor should there be any "religious obstacle" to keeping the building open to visitors of all faiths, the council has ruled, provided they "act in accordance with its greatness as a place of worship."

This was confirmed in mid-July by a presidential spokesman, Ibrahim Kalin, who insisted Hagia Sophia would "retain its character as a cultural monument."

The building was being converted "not from a church to a mosque, but from a museum to a mosque," Kalin reminded journalists, and Turkey would invite "everyone, including Christians and Buddhists," to visit it for free, scrapping the previous entrance fee.

"The main point is there'll be no damage to the mosaics and other artworks, or to the historical texture and architecture," the spokesman added.

"Reactions to Hagia Sophia's conversion are based on old views and prejudices — there's religious freedom in Turkey," he said.

Given such reassurances, some Christians think patience is advisable.

Although Hagia Sophia was built as a great Christian basilica, it hasn't functioned as a church for 567 years. Restoring it from secular to religious use, even as a mosque, could enhance its spiritual value for all faiths.

That was the hope expressed in June by Turkey's new Armenian Orthodox patriarch, Sahak Masalyan, who has been upbeat about the prospects for Turkey's Christian minorities.

That has since been echoed by Catholics leaders such as Cardinal Christoph Schönborn of Austria, who has also called for the landmark to be used for inter-faith gatherings.

In a short June statement, Turkey's bishops conference said it would have preferred Hagia Sophia to remain a museum, but also accepted the Erdogan government's right to determine its future.

This was followed up in July by Bishop Paolo Bizzeti, Italian-born apostolic administrator of Anatolia, Turkey, who said he shared the pope's sadness, but recognized that up to 70% of Turks had approved the move, making it "not just the whim of a president."

Turkey's scattered Catholics enjoy greater recognition now than in the past, Bizzeti told Italy's Servizio Informazione Religiosa. They could be heartened that Hagia Sophia would remain open to all.

With Islamist opinion now appeased and once strictly secular Turkey showing greater public openness to religion, could better legal protections now also be in prospect for its Christians?

Up to 350,000 Christians died in a 1919-1922 Greek-Turkish war over Anatolia, while 1.3 million more were deported before Turkey's borders with Greece were set by the 1923 Treaty of Lausanne.

Although the same treaty established protections for Christians and Muslims on each side, Christian rights were restricted in practice by the new Turkish state, leaving churches facing permanent problems recruiting clergy, establishing associations and obtaining building and renovation permits.

In a 2019 survey, the EU's governing commission noted that Turkey still had a "serious problem" with "threats directed against national, ethnic and religious minorities," and was still failing to provide "protection of language, religion, culture and fundamental rights in accordance with European standards."

Such judgements were vigorously contested in a report this July by the governing AKP, which insisted non-Muslim minority rights had improved since it took power in 2002, and listed hundreds of properties handed back to Christian denominations.

There are signs of possible movement.

Erdogan's government has pledged to go on restoring assets to non-Muslim communities under laws on minority faith protection, and in August 2019, the foundation stone for an Assyrian church, the first for a century, was laid in a televised ceremony by the president himself.

Although Bartholomew I's Orthodox patriarchate is still seeking the promised return of a 19th-century seminary complex at Heybeliada, forcibly closed in 1971, it too has reconstituted several long-disbanded dioceses and refurbished schools and chapels in a bid to encourage Christians to return.

Turkey's Catholic Church has seven dioceses and apostolic vicariates, with 54 parishes and 13 pastoral centers but has suffered several outrages, including the 2010 fatal stabbing of its bishops conference president, Bishop Luigi Padovese, at Iskenderun, and the murder in 2006 of Italian-born Fr. Andrea Santoro in his church at Trabzon.

It is also denied legal recognition and is still trying to reclaim around 200 properties listed before a 2012 parliamentary commission.

But Turkey resumed diplomatic ties with the Vatican in 2016, and Catholics were encouraged by a warm message from Erdogan at Easter, praising Turkey's "culture of coexistence" and pledging to safeguard religious freedom.

Just what that may mean in practice remains to be seen.

The televised reopening of the Ayasofya Grand Mosque was attended on July 24 by Erdogan and around 500 Muslims, with thousands more in the blocked-off streets outside.

Speaking to journalists before inspecting work on the building, the president defended its conversion as "fulfilment of a historic debt," insisting he'd "given the necessary answers" to critics.

However, Greece's premier, Kyrianos Mitsotakis, called for sanctions at a July European Council summit in response to Turkey's disregard for international agreements, while Greece's president, Katerina Sakellaropoulou, said she'd asked Francis to "use all his influence to sensitze the international public, so the Turkish leadership revokes its decision."

In Turkey itself, even the conciliatory Bizzeti has hit out at the mosque conversion, accusing European governments of failing to demand "legitimate reciprocity" for Muslim freedom of worship in the West. 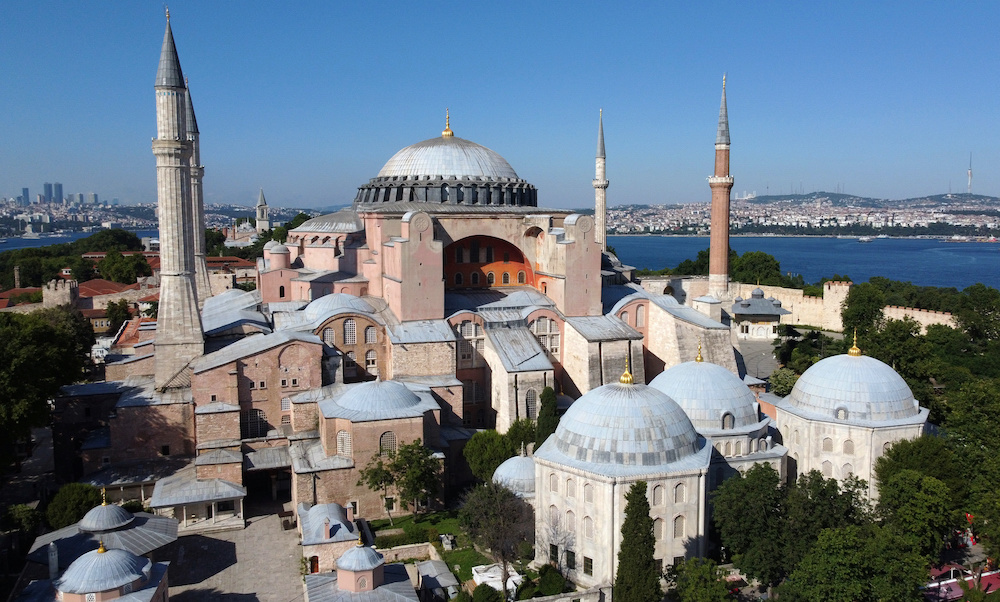 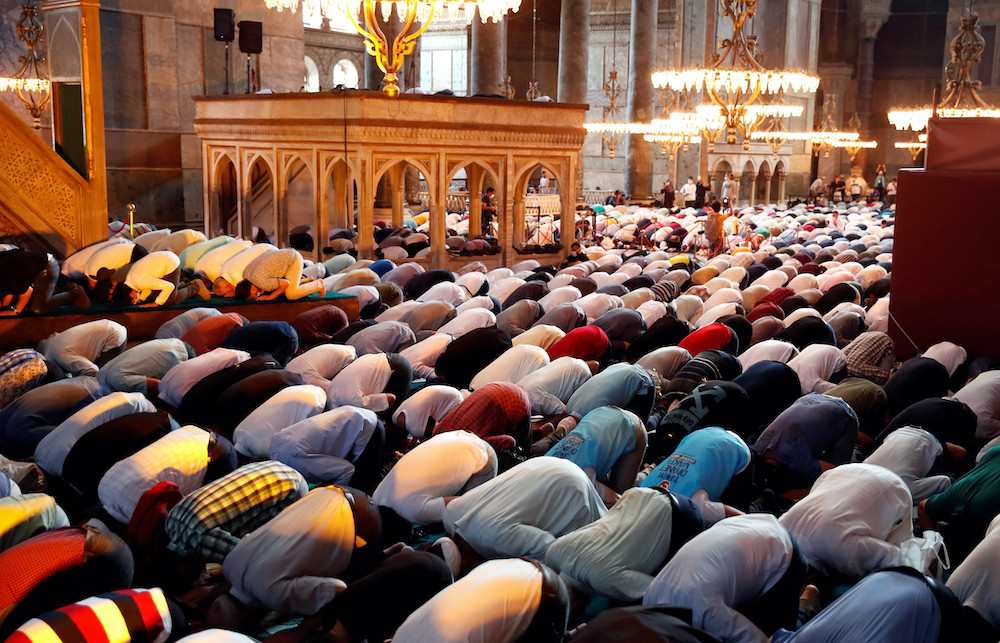