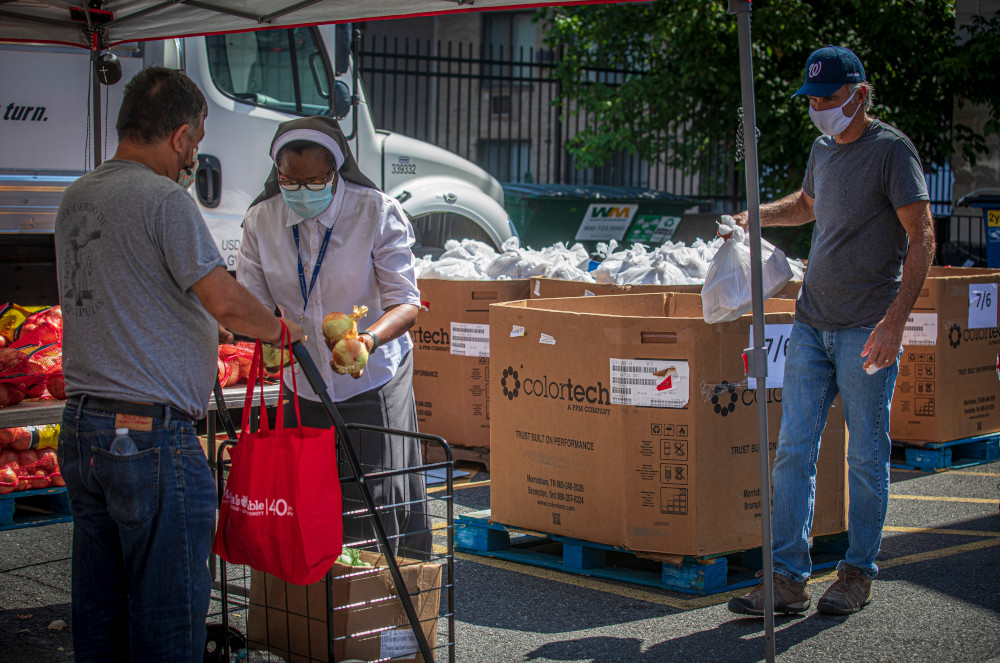 Sr. Romana Uzodimma, a Sister of the Handmaids of the Holy Child Jesus, places onions into a man's bag at Catholic Charities' Spanish Catholic Center parking lot in Washington July 15, 2020, where he is picking up free food supplies. Since the start of the coronavirus pandemic in March, Catholic Charities of the Archdiocese of Washington has served hundreds of thousands of meals to people in need across all of its food programs. (CNS/Chaz Muth)

And what is true at the parish level is also true for all types of Catholic institutions.

"From what I've heard, it's bad, but it's not as bad as people thought it was going to be in the beginning," said Patrick Markey, executive director of the Diocesan Financial Management Conference in Phoenix.

Prior to the pandemic, the worst financial episode for the U.S. church was the "great recession," which started in December 2007 and stretched into 2009. Then, "parishes kept going because people were really generous," Markey said. But when you can't even go worship at church, he added, "it's easy to forget the fact that your parish needs support to keep running."

Joseph Gillmer, executive director of development for the Archdiocese of Washington, agreed with Markey. "I've seen explosive generosity when it's very specific" needs being addressed, he told Catholic News Service, but people are not contributing to parishes and other Catholic entities for the long-term sustainability of the institution.

The Washington Archdiocese had to lay off some of its workforce, cut the hours of other employees, and let some open positions go unfilled. Those events were repeated at dioceses throughout the country.

At least two U.S. dioceses have sought bankruptcy protection in the courts months after the pandemic began, as the sudden and near-complete drop-off of revenue has affected their ability to remunerate the victims of clergy sex abuse. 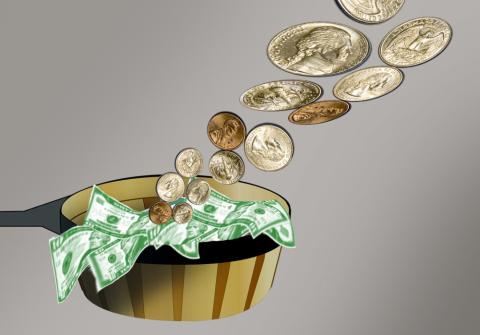 Gillmer, though, was enthusiastic about several initiatives that demonstrated the willingness of Catholics to give to help power its parishes and ministries through the pandemic.

A parish support initiative got an online giving platform for nearly every parish that didn't have one prior to the coronavirus outbreak; a page on the archdiocesan website directing viewers to any parish in the archdiocese to make contributions is now its second-most visited webpage. A needy parish fund was expanded, with $250,000 going to parishes. Parish income is still down 10% from pre-pandemic levels, though.

A parish pantry fund to help out about 60 parishes that have food pantries netted $515,000, which, according to Gillmer, "should be enough to get them through the winter."

"The larger story is the generosity of the Catholic community is extraordinary. They have stepped up in a very big way for very good causes," Gillmer said. "When the chips were down, parishioners stepped up in a big way. ... It's amazing what communities do when the need is there."

Much the same is true with Catholic Charities affiliates.

Catholic Charities of Louisville, Kentucky, got a federal Paycheck Protection Program loan, and some pass-through grant money from area foundations for COVID-19 relief, said Lisa DeJaco Crutcher, its CEO. It also got lucky in that its annual fundraiser had a Mardi Gras theme and was conducted in February, before the pandemic was declared.

The 2021 fundraiser will be entirely online, Crutcher told CNS, and there's no telling how much money will be raised. "Our individual donations are probably down in the neighborhood of 30%," she said, and the agency's revenue for its social enterprise programs is down 38%-49%.

What's more, she added, a language services program hobbled by COVID-related restrictions and businesses operating for reduced hours, "had our first ever month with a loss in a program — which is not good."

Catholic Charities of Dodge City, Kansas, had to cancel its major annual fundraiser and the response to the pandemic is not like typical disasters, according to Debbie Snapp, executive director.

"The Greensburg tornado [in 2007], there was a huge response to that. This disaster, we have not seen that kind of outpouring from people," Snapp told CNS.

Catholic Charities' pandemic relief has been mostly utility and rental assistance and paying for motel rooms for those without shelter.

"We had a couple of people, and calls from outside of our area, because we had really high numbers early on because the meatpacking plants were mostly Hispanic or migrants from somewhere," she explained. "There were a couple of people that called, received stimulus checks, felt they didn't really need it and wanted to do something with some of that money."

Typically, Catholic Charities' food pantries distribute 1 million pounds a food a year. Since the pandemic was declared in March, that amount has more than doubled, he added. Pantries that used to see 200-250 people a week are seeing that number every day. 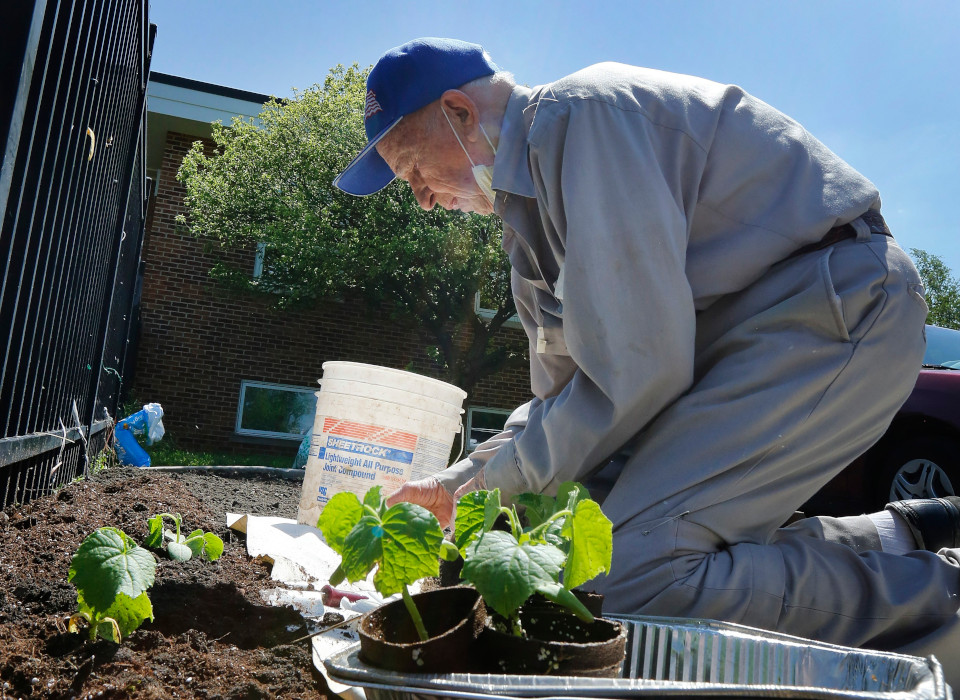 John Surufka, 97, plants cucumbers in one of the gardens at St. George Church in Tinley Park, Ill., May 29, 2020. The vegetables are donated to the Tinley Park Food Pantry. (CNS/ Chicago Catholic/Karen Callaway)

Catholic Charities have pivoted teams and put protocols in place to counter the fatigue. "We have to do the best we can, supporting our employees, increasing our bench strength and increasing group support to those workers who are on the front line," he said.

National collections have taken a hit, too. According to Mary Mencarini Campbell, executive director of the U.S. bishops' Office of National Collections, those collections are down 10%-60% from year-ago levels. The one silver lining is that the shortfall has lessened in recent months.

But it takes four to five months for dioceses to process collection results and report them. And two of the biggest collections, the Catholic Campaign for Human Development collection in November, and the Retirement Fund for Religious drive in December, have yet to report any totals.

"I heard of at least one diocese that said, 'We're going to postpone all collection local, national, special — until next year,'" Campbell said.

The U.S. bishops' committees in charge of distributing grants from these collections will "make the best decisions they can based on the funds they have," she added. "We will likely continue to see an impact into 2021 until local parish life for the majority of people is back to what we experienced earlier this year."

Despite the cloudy forecast, Andrew Robison, owner and president of Petrus Development, which in its own words is all about "helping Catholic organizations maximize their fundraising success," predicts a mostly sunny future.

"My theory is that 2021 is going to be a record-breaking year in giving to nonprofits, especially religious nonprofits," he said.

Robison personally has conducted more than 100 hours of online training since the pandemic started for nonprofit groups on fundraising and to offer strategies to be more effective, including a daylong session Jan. 13.

Robison said he believes giving will return to 2019 levels "in 2021, certainly by 2022. My crystal ball is as clear as everybody else's. It's going to be the organizations that are out there" actively fundraising that will set the pace.

"With the pandemic, we have seen two responses in philanthropy on the fundraising side and on the ministry side: 'Hey, this is a tough year, we're just going to shut down and we'll call you when it returns to normal.' Their numbers won't be close to where they were previously," Robison declared.