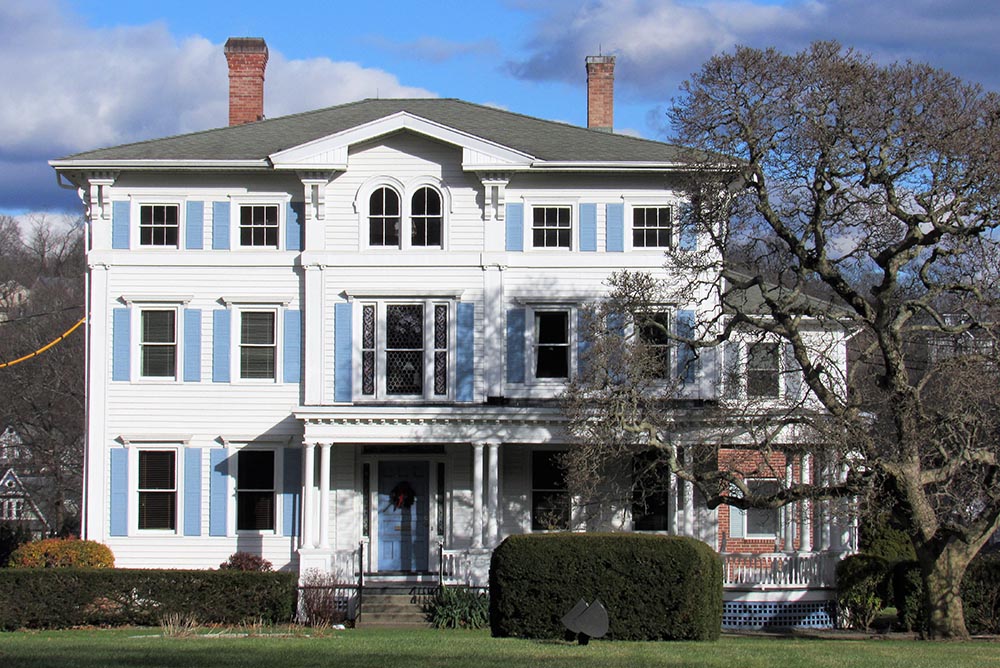 The chancery of the Diocese of Norwich, Connecticut (Wikimedia Commons/Farragutful)

A Roman Catholic diocese in Connecticut filed for federal bankruptcy protection on Thursday, July 15, to resolve dozens of lawsuits alleging the abuse of teenage students decades ago at the former Academy at Mount St. John School, a residential treatment center for troubled youth in Deep River.

Documents filed by the Norwich Diocese, which oversaw the facility, indicate it has $50 million to $100 million in estimated liabilities owed to 50 to 99 creditors. To date, nearly 60 former residents of the school have sued the diocese and a former bishop for damages, exceeding the diocese's current financial ability to pay, according a statement issued by the diocese.

"A Chapter 11 bankruptcy will allow the court to centralize these lawsuits, as well as help the Diocese manage its litigation expenses and preserve adequate financial resources for all essential ministries," Bishop Michael Cote said in a statement. "If the Diocese had not filed for bankruptcy, it would be unable to ensure that all of the individuals who file claims are treated fairly and have equal access to the funds available."

According to the filing, the diocese has $10 million to $50 million in assets.

Attorney Kelly Reardon, who represents six former students at the school, said the filing could delay the resolution of their claims, but she's hopeful the diocese will be transparent about its finances and the victims will eventually receive as much compensation as possible.

"Hopefully there will be enough money in the total estate that each person will be able to receive 100% compensation," she said. "But unfortunately in these situations there usually isn't enough money and so it's more of a question of what percentage of your case value are you going to get?"

The diocese's parishes, cemeteries, schools and religious orders are not part of the Chapter 11 filing, which is not expected to have a direct impact on the day-to-day operations of those entities or the employment status, salaries and benefits of the diocese's employees or retirees, the bishop said.

"Today's filing puts all civil actions, judgments, collection activities and related legal actions against the Diocese on hold," according to the statement. The U.S. Bankruptcy Court is expected to set a deadline for individuals and organizations to file financial claims against the diocese.

"The full extent of the Diocese's liabilities will not be known until after the claim deadline has passed," according to the statement. The Norwich Diocese was established in 1953. It covers half of the state's eight counties — Middlesex, New London, Tolland and Windham in Connecticut, as well as Fishers Island, New York. The smallest diocese in the state, it has about 228,000 parishioners.

In 2018, an initial 24 men filed lawsuits against the Norwich Diocese and former Bishop Daniel Reilly, claiming they were fondled, sodomized and raped while attending the Academy at Mount St. John by two Christian brothers and at least two other staff members between 1986 and 2000. The boys, who were between 11 and 15 years old, had been placed at the now-defunct school by the state Department of Children and Families or the state's court system. DCF was not named as a defendant in those lawsuits.

The Norwich Diocese said Thursday it is the 31st and most recent Catholic religious organization in the U.S. to seek bankruptcy protection under Chapter 11. As of May 2021, 19 of the earliest bankruptcies have led to a successful reorganization while 11 of the more recently filed reorganizations are pending, the diocese said.

"Ours is not the first diocese to experience a reorganization," said Cote in a video message, calling the decision the "most important news" he's had to deliver during his 18 years leading the diocese.

Last October, a Roman Catholic diocese in New York City's suburbs sought relief from a torrent of lawsuits filed after the state suspended the statute of limitations for suing over sexual abuse by priests. The Rockville Centre Diocese, which encompasses much of Long Island and 1.4 million Catholics, said in filing for Chapter 11 protection that it will ask a bankruptcy court to put all cases on hold so that they can be settled together — a process it says is more equitable but that victims say limits their ability to get at the truth.

"The financial burden of the litigation has been severe and only compounded by the COVID-19 pandemic," Bishop John Barres said in a video and letter on the diocese's website. "Our goal is to make sure that all clergy sexual abuse survivors and not just a few who were first to file lawsuits are afforded just and equitable compensation."

The abuse accusations at the Academy at Mount St. John School in Connecticut are not the only claims made against the Norwich Diocese. In a separate matter in 2019, Cote released the names of 43 priests who have served in the Connecticut diocese and have had "allegations of substance" made against them about the sexual abuse of minors since 1953. At that time, the diocese had paid about $7.7 million since 1977 in settlements to victims in nine cases, with 23 still pending.

Cote said at the time he was "grievously sorry."