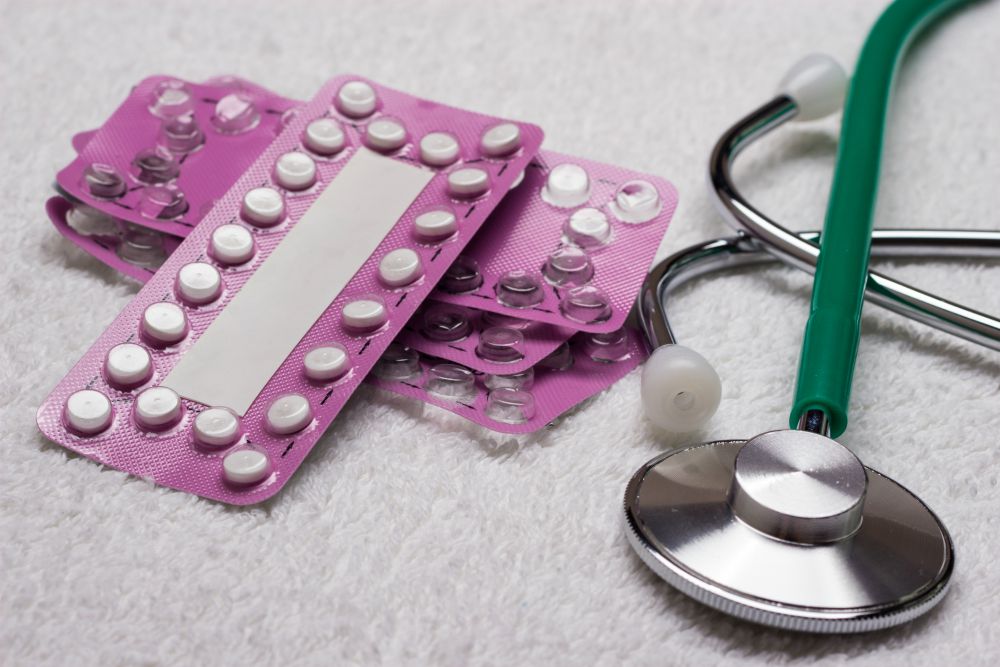 Whether the Trump administration's expansion of exemptions to the federal mandate that requires contraception to be included in health insurance coverage is cause for celebration or hand-wringing depends primarily on whether the years-long controversy is seen as a religious liberty issue or a women's health one.

The U.S. bishops and other Catholic leaders say it's the former, while many Catholic advocates for women and the poor argue it's the latter.

Bishop David Zubik of Pittsburgh, who sued the government over the mandate, says a "cornerstone principle" of the First Amendment has been re-established, "that freedom of religion means freedom to practice our faith in daily life, not just in worship and prayer."

But Patricia Miller, author of a book on the history of Catholic teaching on sexuality and American politics, said, "This is a 'ginned up' religious liberty issue."

"It's a long-term tactic by the Catholic bishops, joined by evangelicals, to turn this issue of contraception into a religious liberty issue for political purposes," she said.

The new interim rules that expand the type of employers who are exempt from the mandate for religious or moral reasons were released Oct. 6 by the U.S. Department of Health and Human Services (HHS). On the same day, Attorney General Jeff Sessions released a memo summarizing principles of religious freedom, including the right of religious employers to hire only people who share the organization's beliefs and conduct.

The new HHS mandate rules send the message that birth control is "not normal health care that's covered by insurance," said Miller, author of Good Catholics: The Battle over Abortion in the Catholic Church. "There is no other health service, period, that is treated this way."

The contraception mandate was included in the Affordable Care Act because clinical data show that several medical services — including birth control, AIDS and diabetes screenings, and annual well-woman visits — improve overall health, which prompted the National Academy of Medicine (formerly the Institute of Medicine) to recommend providing them at no cost.

If women lose insurance coverage of contraception, they will pay at least $250 more per year for birth control, according to a study that found that the mandate saved women an estimated $1.4 billion on birth control pills in its first year alone. Increased access to contraception also correlated with a sharp drop in unintended pregnancy and abortion rates during 2013 and 2014, according to a Guttmacher Institute study. 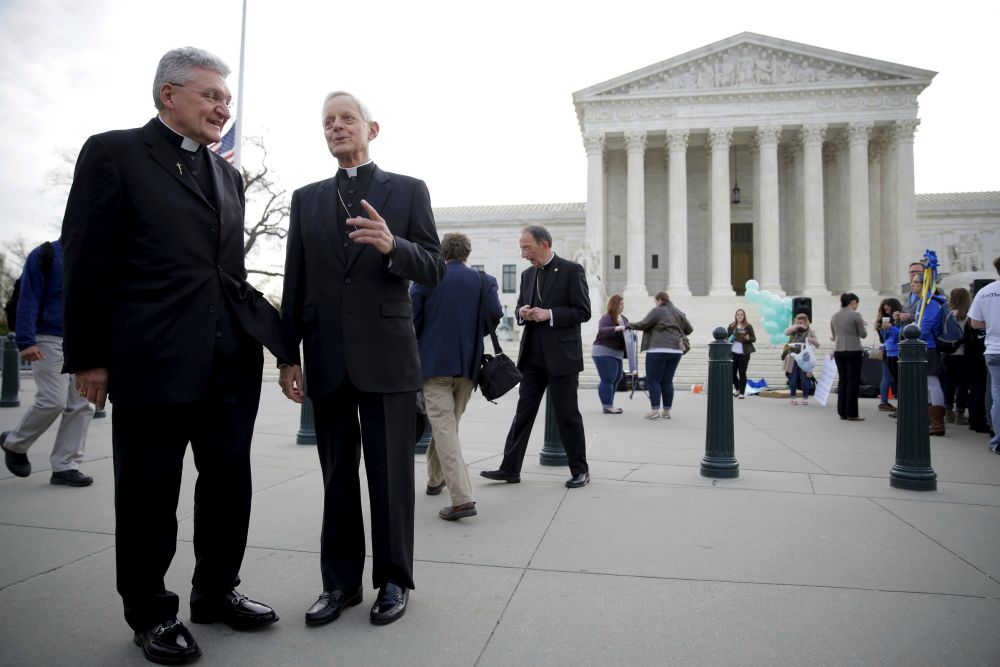 "Many in the Republican Party are extremely sanctimonious about low-income people having children they can't afford, then they have the nerve to say they shouldn't have access to birth control," she said.

Churches were always exempted from the mandate, and a later accommodation allowed other religious employers to opt out by filling out a form. But the new rules go farther, allowing most employers — including publicly traded, for-profit corporations that will not have to prove moral opposition — to drop contraceptive coverage.

This concerns NETWORK, which has been fighting for increased access to health care for all Americans, especially people who are poor.

"For us, this isn't about religious liberty, it's about health care," Campbell said of the change to the mandate, calling it "an assault on the Affordable Care Act and on women" in a statement.

However, the U.S. bishops and others have applauded the decision by the Trump administration.

The bishops' conference statement hailing Trump's actions said, "The Administration's decision to provide a broad religious and moral exemption to the HHS mandate recognizes that the full range of faith-based and mission-driven organizations, as well as the people who run them, have deeply held religious and moral beliefs that the law must respect."

It was signed by bishops' conference president Cardinal Daniel DiNardo of Galveston-Houston and Baltimore Archbishop William Lori, chairman of the bishops' Committee for Religious Liberty, which was founded in 2011 to fight the mandate and other issues. Lori's committee was founded as an ad hoc committee, but the bishops made it a permanent committee in June.

The bishops also said the change to the mandate "corrects an anomalous failure by federal regulators that should never have occurred and should never be repeated."

On this, Catholics from various sides of the ideological spectrum have some agreement. The Obama administration's initial definition of religious organizations that were exempt from the mandate was too narrow, according to legal experts and even some moderate and progressive Catholics.

"The mandate reflected a view that religious freedom is really just about a freedom to worship on the Sabbath and believe in the privacy of your home," said Richard W. Garnett, professor of law at the University of Notre Dame and director of the university's Program on Church, State and Society.

"But for many people in the Christian tradition, faith is something that's lived on Monday, not just practiced on Sunday," Garnett said, adding that litigation about the mandate reflected a concern that "what happens in soup kitchens and adoption agencies doesn't really count as religious exercise."

Several dioceses, including Erie, Pennsylvania, and Washington, and Catholic organizations, including Priests for Life and the Little Sisters of the Poor, challenged the HHS mandate in the courts. More 70 religious organizations represented by the law firm of Jones Day also filed suit against the mandate in a combined suit, Zubik v. Burwell. The U.S. Supreme Court last May unanimously returned that case to the lower courts to determine if contraceptive insurance coverage could be provided without directly involving religious employers who objected to it.

A week after the announcement of the new rules, the Department of Justice settled that case with the plaintiffs, agreeing they would not have to provide morally unacceptable products and procedures through their health insurance.

Bishop Zubik said the previous rule "was based on the faulty premise that religious organizations, such as Catholic Charities, were not religious enough to qualify for the exemption. We are gratified that the settlement has eliminated a new and dangerous distinction between houses of worship and religious institutions."

Garnett of Notre Dame also believes the new HHS rules, originally promised in May by President Donald Trump, are "more consistent with this broader view of what religious exercise means." 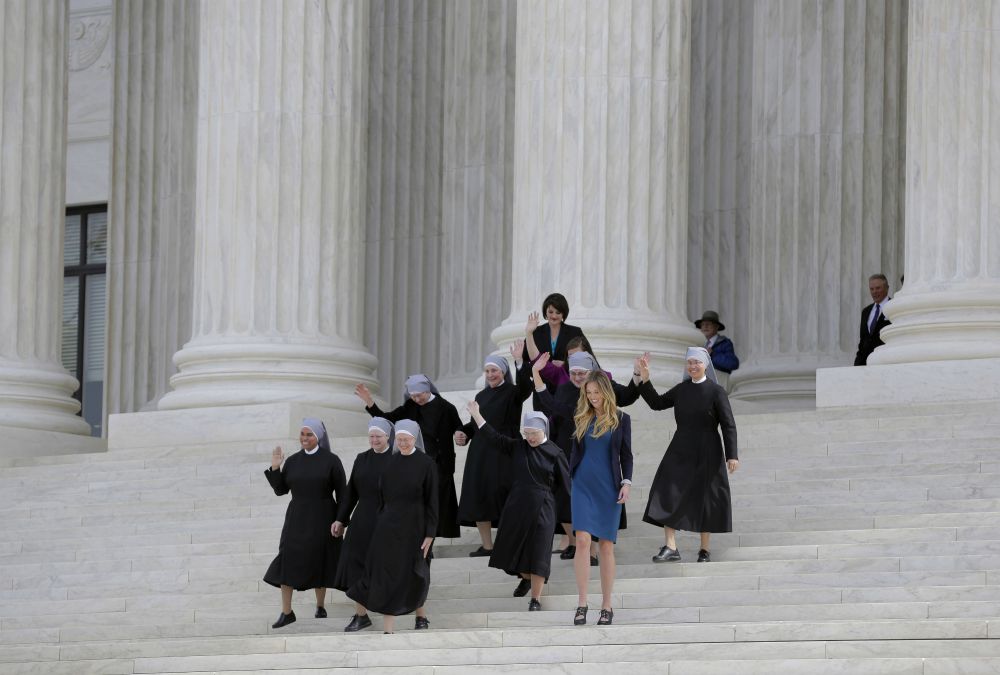 Some Little Sisters of the Poor and other women walk down the steps of the U.S. Supreme Court in 2016 after attending oral arguments in the Zubik v. Burwell contraceptive mandate case. (CNS/ Reuters /Joshua Roberts)

Adequate accommodation, or not

Others, including NETWORK and the Catholic Health Association, which represents Catholic hospitals and other health care providers, were satisfied with an earlier accommodation proposed by the Obama administration in which employers could fill out a form to opt out of providing contraceptive coverage.

"The initial regulation that was promoted by the Obama administration did not adequately address the needs of religious institutions because they only allowed an exemption to actual churches, not to integrated subsidiaries," admitted Campbell of NETWORK, which joined the pushback for more safeguards for religious institutions in 2011 and 2012.

But Campbell was satisfied that the 2013 accommodation "was a result of President Obama and other elected officials listening to sincerely held religious beliefs — as well as the needs of women," she said.

Others, including the U.S. bishops' conference and the Becket Fund for Religious Liberty, which represented the Little Sisters of the Poor in their lawsuit, said the accommodation did not go far enough. Campbell called that tactic "moving the goal post."

Miller, who opposes the new expansion, admits that the initial narrow definition was "a huge strategic mistake by Obama," which "opened up old wounds about anti-Catholicism" and garnered opposition from moderate Catholic columnists such as E.J. Dionne Jr. (Dionne later came to see the accommodation as sufficient.)

The debate over the HHS contraception mandate also raises questions about what constitutes "illicit material cooperation with evil," as well as the relationship between employee and employer.

Although some believe signing a form to opt out of contraceptive coverage is not materially complicit, Garnett said the legal definition doesn't have to be theologically orthodox. "For legal purposes, what matters is the belief of the claimant, not mine, or a theologian's or a bishop's," he said. "Their belief was that, despite the label of it being an accommodation, it was still a problem."

The Religious Freedom Restoration Act of 1993 sets up a balancing test that asks if the government is imposing a burden on religious liberty and whether that burden is necessary to serve the government's compelling interest, Garnett explained, adding that "there are limits to the extent to which a religious objector can be accommodated."

In a similar case that involved the Hobby Lobby chain of craft stores, the U.S. Supreme Court ruled in 2014 that "if the government has a compelling interest in delivering contraception to cover women without cost-sharing, that interest can still be served without requiring employers to pay for it," Garnett said,. The court said even a nonreligious organization, if "closely held," could choose not to provide birth control for its employees.

With the new rules, Campbell of NETWORK is concerned about the religious liberty of employees, for whom benefits, such as health insurance, are part of their earned compensation. "That employee, in our perspective, should be able to act according to her conscience, not the employer's conscience," she said.

The debate will continue, since several states and the American Civil Liberties Union have filed lawsuits claiming the new rules that expand exemptions to the mandate discriminate against women. In addition, an upcoming U.S. Supreme Court case will weigh religious liberty versus discrimination over the issue of a Colorado bakery that refused to make a cake for a same-sex wedding. That case also includes arguments about free speech as well religious freedom.

While Garnett and the U.S. bishops believe decisions such as the new mandate rules and the attorney general's memo on religious freedom are "simply restating what the law has been for a long time" under the Religious Freedom Restoration Act, others worry that women's and LGBT persons' rights are being eroded under the guise of religious liberty.

Says Campbell: "I believe this is just posturing of conservative rhetoric. It has very little to do with religious liberty."

A version of this story appeared in the Nov 3-16, 2017 print issue under the headline: Contraception mandate debate.