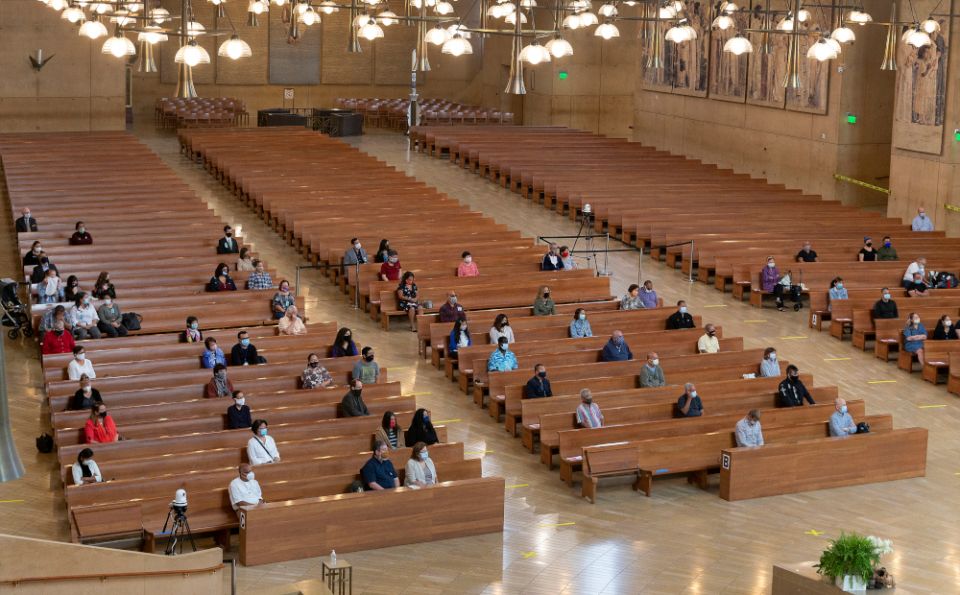 In this Sunday, June 7, 2020, file photo, a hundred faithful sit while minding social distancing, listening to Los Angeles Archbishop Jose H. Gomez celebrate Mass at Cathedral of Our Lady of the Angels, the first Mass held in English at the site since the re-opening of churches, in downtown Los Angeles. The Supreme Court is telling California it can’t enforce a ban on indoor church services because of the coronavirus pandemic. The high court issued orders late Friday, Feb. 5, 2021, in two cases where churches had sued over coronavirus-related restrictions in the state. (AP File/Damian Dovarganes)

San Francisco — California Gov. Gavin Newsom's office on Feb. 6 issued revised guidelines for indoor church services after the Supreme Court lifted the state's ban on indoor worship during the coronavirus pandemic, but left in place restrictions on singing and chanting.

In the most significant legal victory against California's COVID-19 health orders, the high court issued rulings late Feb. 5 in two cases where churches argued the restrictions violated their religious liberty. The justices said for now California can't continue with a ban on indoor church services, but it can limit attendance to 25% of a building's capacity and restrict singing and chanting inside.

California had put the ban in place because the virus is more easily transmitted indoors and singing releases tiny droplets that can carry the disease.

Newsom's office said those measures were imposed to protect worshippers from getting infected.

"We will continue to enforce the restrictions the Supreme Court left in place and, after reviewing the decision, we will issue revised guidelines for worship services to continue to protect the lives of Californians," the governor's press secretary, Daniel Lopez, said in a statement.

Before the ruling, indoor worship services were banned in purple-tiered counties — those deemed to be at widespread risk of coronavirus transmission. This tier accounts for the vast majority of the state.

The justices were acting on emergency requests to halt the restrictions from South Bay United Pentecostal Church in Chula Vista and Pasadena-based Harvest Rock Church and Harvest International Ministry, which has more than 160 churches across the state.

"You can go to your house of worship, as of now! You can go back to church, we're excited about that," Pastor Art Hodges of the South Bay United Pentecostal Church told KNSD-TV.

The church has defied state orders since last May by holding service indoors while following COVID-19 safety protocols, Hodges said. He said he was thankful to hold services on Feb. 7 "without any pressure or threat or concern" and added that the 25% attendance limit will make him add two or three more services to accommodate church members.

"It at least allows us some wiggle room to operate," he said.

On Instagram, Harvest Rock's ministry in downtown Los Angeles announced it would hold an in-person service the evening of Feb. 6.

"Bring the kiddos! We'd love to see the whole family for service tonight!" the announcement said, followed by the hashtag #inpersonservice.

The church said in a statement it will continue to petition for the right to sing during indoor services, arguing the state was unfairly allowing the entertainment industry to film a singing competition but not during indoor worship.

"While it is one thing to lock down based on data, it is an entirely different motive to allow some groups a right that is denied to others." the statement said.

The court's newest justice, Amy Coney Barrett, said in her first signed opinion that it was up to churches to demonstrate that they were entitled to relief from the singing ban. Writing for herself and Justice Brett Kavanaugh, she said it wasn't clear at this point whether the singing ban was being applied "across the board."

Not all places of worships plan to reopen right away.

The head of Grace Cathedral in San Francisco said the Supreme Court was "not doing anyone a favor" by lifting the ban.

The Archdiocese of Los Angeles, the largest of its kind in the U.S. with more than 5 million Catholics, cautiously advised "parishes who choose to return" to indoor worship to follow the singing and room-capacity rules, in addition to requiring physical distancing and face masks.

"The Archdiocese of Los Angeles is gratified by the Supreme Court's decision to allow indoor worship services," it said in a statement.

The court's action follows a decision in a case from New York late last year in which the justices split 5-4 in barring the state from enforcing certain limits on attendance at churches and synagogues. Shortly after, the justices told a federal court to reexamine California's restrictions in light of the ruling.

With few exceptions, California's COVID-19 restrictions have been largely upheld. But a number of lawsuits, such as one seeking to allow outdoor dining, are still in the courts.

After coronavirus, how will we learn to un-quarantine?

Philadelphia priest ordered to return to prison after bail hearing