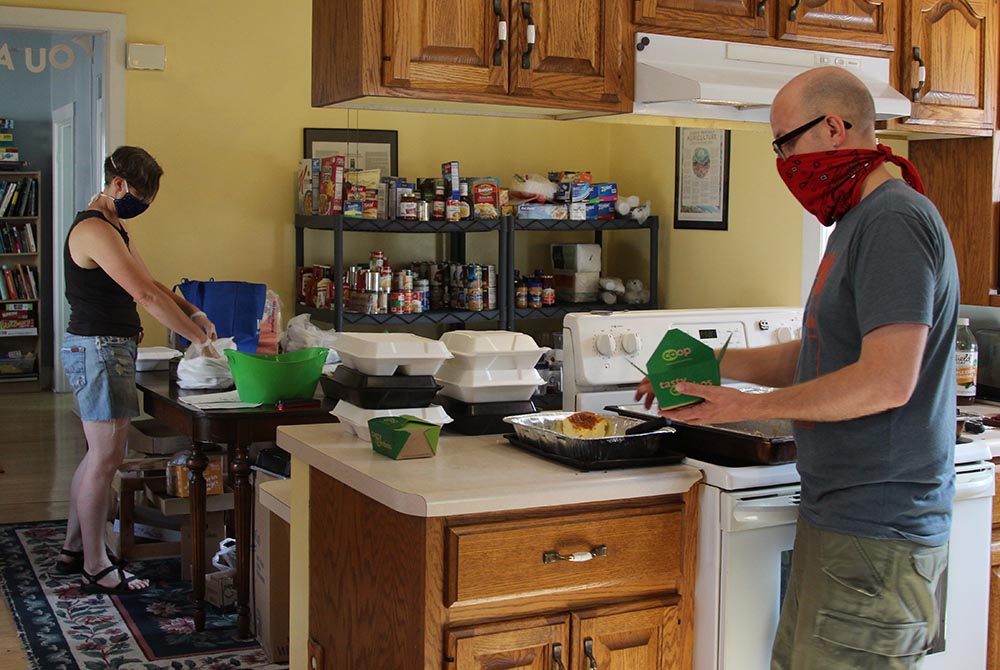 "For the first time in 17 years, I look up at the Manhattan sky and see stars," says Jim Reagan, who lives and serves at New York Catholic Worker's St. Joseph House on Manhattan's Lower East Side. "I hear birds chirping. It's incredible, and it makes me really question the ways we've been living."

Reagan is one of many Catholic Workers across the United States reacting to the pandemic with curiosity, hope, and a commitment to continue living according to principles of the founders, Dorothy Day and Peter Maurin. In 1933, the duo responded to the Great Depression by founding the Catholic Worker movement, which today is a decentralized network of urban houses of hospitality and rural farming communities across the United States and beyond. Today, Catholic Workers hear a call to respond to the pandemic in line with the founders' principles of direct charity and the pursuit of systemic justice.

"The people who live with us are very vulnerable, so the first thing we did when the pandemic hit New York was to get lots of soap, hand sanitizer and disinfectant," says Reagan. "The second thing was to have a long discussion about whether or not to serve meals. We realized we could no longer serve people in the house, but we started serving a grab and go meal of sandwiches, soup and coffee. Donors gave us cookies and granola. Where previously we served about 120 to 150 people daily, now it's 220 to 250."

A similar change has taken place at the New Orleans Catholic Worker, which is delivering about 50 meals a day to its neighbors in need. "Fortunately, thus far we personally don't know anyone who has been affected, but we are taking precautions," says worker John Yevtich. "One of the families living with us recently had a teenager run away from home — not for the first time. When this young person comes back, we'd like to offer a 'prodigal son' welcome, but safety concerns pose a tough question." 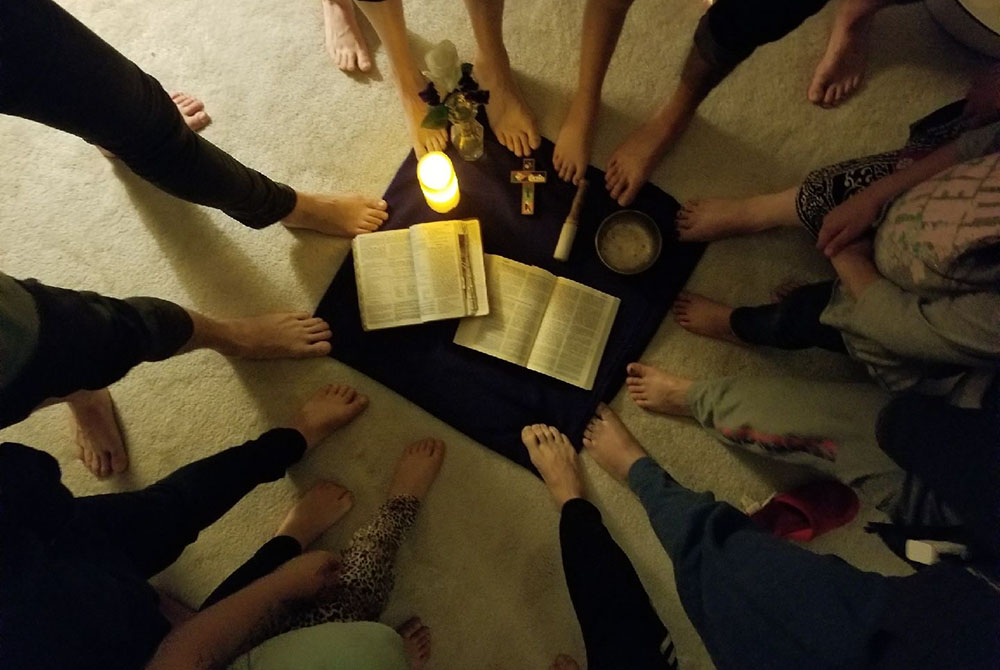 Maria Bergh of Su Casa Catholic Worker in Chicago, whose specific mission is to help families in crisis, notes that her community was already in transition before the pandemic hit. "We had several families and workers moving out right before the crisis hit. Now, some have decided to return," she says. "These changes are making us take a deep dive into questions of consensus and power. We no longer have a strong distinction between who is a worker and who is a guest. Also, while often we question governmental authority, this is a time when we are choosing to follow guidelines. In many ways the whole world is engaged in an act of civil disobedience against capitalism. We are seeing this moment as an opportunity and choosing not to live in fear."

Bergh believes that the pandemic offers not only challenges, but also new possibilities. "It seems uncannily well-timed that a natural disaster is slowing down our consumption when we are so close to the ecological tipping point. Maybe this is showing us that we can indeed cut down on our consumption," she says. "But I also worry about people not having resources. There is a tough balance between reorganizing our priorities on a wider scale and the immediate reality of people needing to feed their families."

John Hogue, who has lived and served at Su Casa for two years, agrees that the pandemic offers a chance to rethink priorities. "I am most grateful for a shared slower pace of life. It has to do with society as a whole being less in movement," he says. "This creates space for going on walks, enjoying long dinner conversations, and watching movies together. We've done more processing of previous conflicts. I hope society as a whole can get habituated to these practices that were always options, though previously we thought we were too busy." 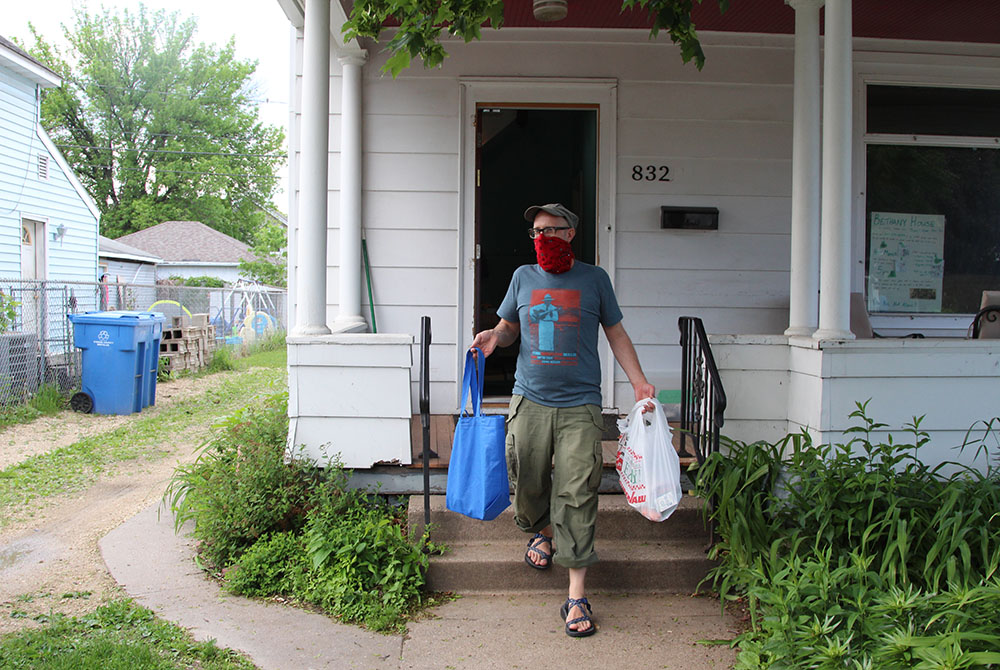 When asked if they see the pandemic as leading to lasting social change, workers offer a variety of responses. "I believe it is that it could go either way," says Eric Anglada, who lives with five other adults and two children on St. Isidore Catholic Worker Farm in Cuba City, Wisconsin. He mentions that the pandemic has given his community the chance to do ecological restoration work on the land, planting 100 trees, working on erosion control, and starting an orchard.

"I am concerned people may start relying on screens even more and avoid intimate contact with others," Anglada says. "But the pandemic also shows that people are capable of making a rapid change to meet a crisis head on. This might be a respite for Mother Earth. Maybe people will realize that they don't need to travel as much or be as consumeristic as they've been. Some people have become more rooted in home and family, hungering for community."

John Yevtich notes that in New Orleans, the local government housed people who'd been experiencing homelessness in hotels to stop the spread of the virus. "It seems reasonable to hope that our local society will see that it is not so hard to provide housing and care for those who need it," he says. "However, I don't know if we're going to see any large-scale social transformation. Capitalism has a way of coming back. But no matter what, we want to do the corporal works of mercy, treating all people with dignity."

Jim Reagan, who recently went with other workers to observe homeless sleepers being evicted from the New York subways at 1 a.m., agrees. "If Dorothy Day were here now, I think she would be sensitive to the situation in the South Bronx and some areas of Queens where people must go to work and can't socially distance. She'd certainly want to feed people." 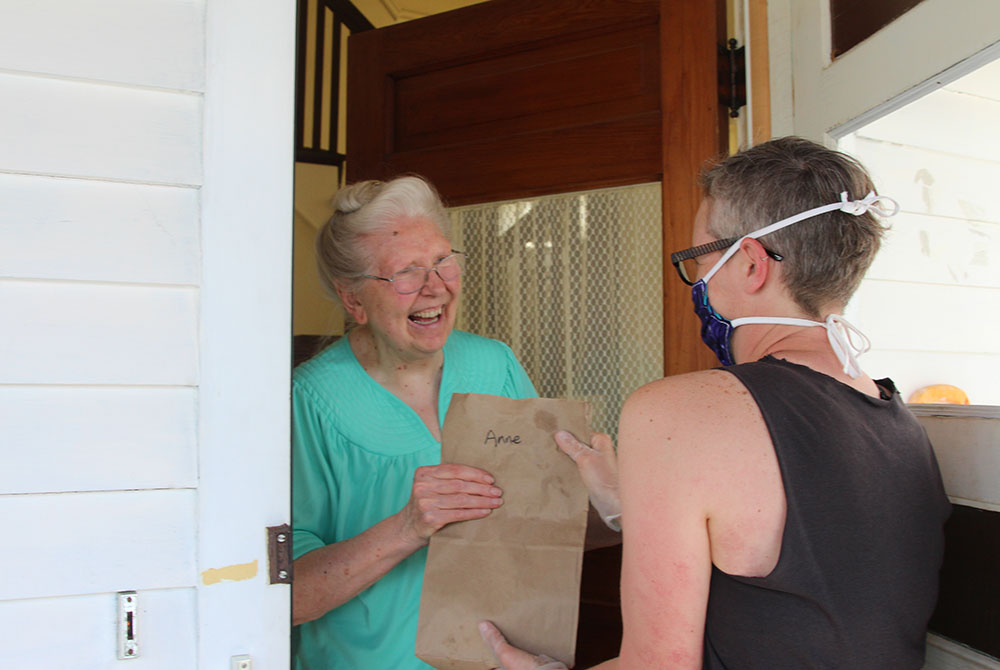 Delighted to hear birdsong in lower Manhattan, Reagan feels compelled to question our urbanized way of life. "Here, we are at the epicenter in a densely populated city. It makes me wonder about Peter Maurin's ideas. Maybe this is not the way to live — seeing just a box's worth of sky framed by buildings. What does this situation say about having too many people densely packed in one place with such centralized modes of organization and huge disparities? I don't know the answer to that question, but it's certainly food for thought."

Diane Leutgeb Munson of the Winona Catholic Worker in the Mississippi River town of Winona, Minnesota, believes that all of us can learn from the people served by Catholic Worker communities. "People experiencing homelessness find a lot of joy in life," she says. "The gift of this moment is our common humanity. Our guests are always finding glimmers of hope in the dark. This is not the first dark moment for most of the people we work with. It's inspiring and humbling. This is not a new experience for most of our friends. They are really wise teachers, and there is so much we can learn from them."

All of the workers assert that the example of their co-founders is helping them get through this moment. "Dorothy Day, who experienced the 1906 San Francisco earthquake, saw people caring for each other during a hard time," says Eric Anglada. "This sense of mutual aid made her want to co-found the movement with the idea that we could live this way always. The year 1933 was a moment of great upheaval. Dorothy and Peter felt that Catholic Worker had something distinct and important to share. We have experience living in community, reaching out to those on the margins, and thinking of how our decisions affect the most vulnerable among us."