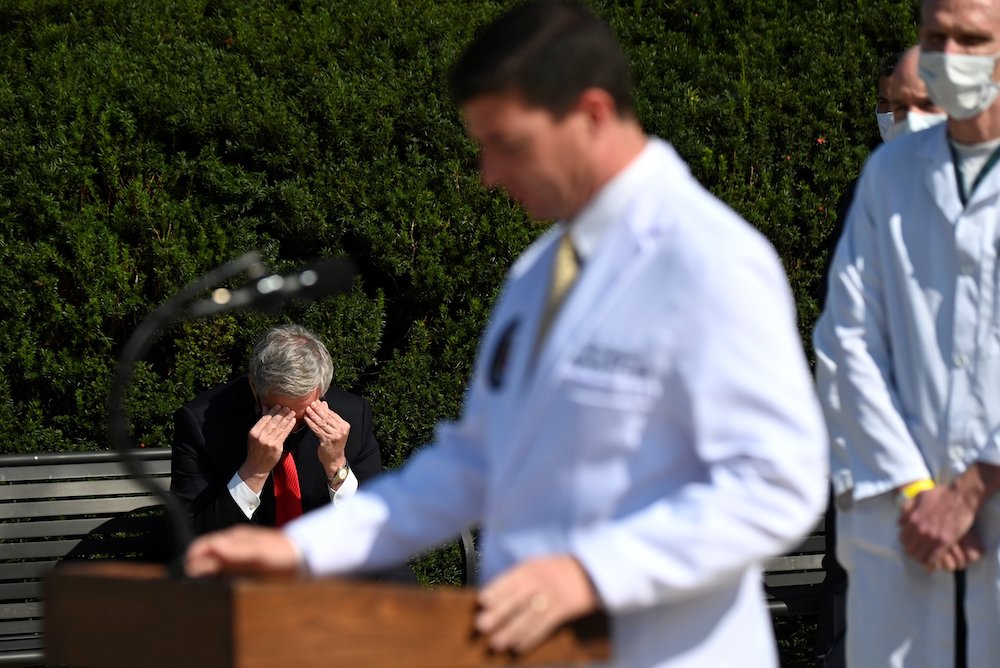 White House Chief of Staff Mark Meadows, left, sits outside Walter Reed National Military Medical Center in Bethesda, Maryland, Oct. 4, as Dr. Sean Conley, a Navy commander who is the White House physician, speaks to the media about President Donald Trump's health after the president was hospitalized for the coronavirus disease. (CNS/Reuters/Erin Scott)

Okay, I have a confession to make. Last spring, as I watched the coronavirus pandemic explode across our planet, I was beyond furious at Donald Trump. Chalk it up to my scientific training as a nurse practitioner and midwife. I knew very well what was coming. Many people were going to die, and it would be at least a year before we got out of this.

I was enraged that Trump had disbanded the National Security Council's pandemic unit, a department that had been praised by experts. His administration ignored a detailed pandemic playbook and the extensive briefing given to them by the Obama administration's transition team. The 69-page pandemic guide was designed to "assist leaders in coordinating a complex U.S. Government response" to highly contagious disease outbreaks all over the world. It listed coronaviruses as one of the serious diseases that could emerge.

The sheer inefficiency and incompetence of Trump's team was supremely galling. I knew that science could help us contain this deadly plague. But instead of presidential leadership, we received denials, disinformation, obfuscation and denigration of the very U.S. health agencies working to save our lives.

I had to fight a growing inclination to pray that Trump would get the virus. Not a bad case, I told myself. Just enough to help him understand the pain and suffering our people were experiencing. This inner dialogue happened early in the summer — long before our president actually did contract the virus, with no help from me.

Thankfully some good angel came to my rescue, and I intuited that to pray for illness for anyone would be to go over to the dark side.

Not a good place for a nun. Or for anyone else.

On talking all of this over with God, I came to understand that I must pray for Donald Trump. At first, the very thought repelled me so much I wasn't sure I could do it. (I'm no saint.) But I also knew a powerful prayer that had helped me in other tough situations. This prayer had the advantage of not needing my own words. In my angry, angst-ridden state, I did not trust my words. They could easily be phony or slip out all wrong.

So of course, I prayed the rosary.

Yes, I know in some Catholic circles the rosary is regarded as monotonous and passé. Not for me. As a good Catholic girl — and a member of Mary's sodality — I grew up saying the rosary almost every day. (I'm dating myself but it's okay.)

The rosary is a kinesthetic mantra. It keeps our hands busy (the kinesthetic part) while helping suspend our conscious mind. And then we sometimes apprehend the quantum-compassionate-love-force God dwelling in the deepest part of our being. 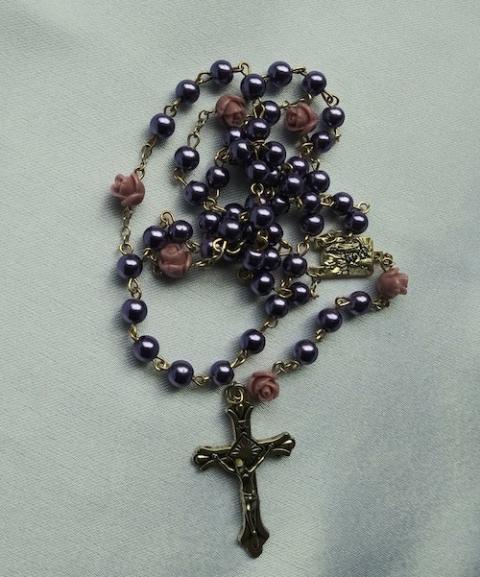 The very monotony of the rosary is also its genius. It lures our conscious mind out of its endless thinking loop and into a peaceful stillness, deeper than thinking and beyond understanding.

In this stillness, God somehow managed to turn my anger away from contempt and toward compassion.

Of course, this didn't happen all at once when I began to pray the rosary for Trump.

I had to force myself through those first days of rosary-saying. As I plowed along, I found that exercising my will in this way brought a new determination to seek the good — to seek God — in all things. Even in the Trumpian disaster.

As the days and weeks went by, I became calmer even as corona-chaos got so much worse. For the first time in my life, I saw how much I had relied upon a stable U.S. government, access to good health care and a stable economy to feel secure. All of these were (and are) now at risk.

I came to understand that my security does not lie with our government, our health care system or our economy. As a believer, my security lies only in God. This brought a deep peace as well as a deepened desire to follow God's leading in my life.

Soon, I was able to both curate and watch the news with greater detachment. I prayed to know what was mine to do in birthing God's dream for my country. How shall we become a place of justice, peace and care for one another? I found both strength and opportunities to educate fellow Catholics about Catholic social teaching and why we must be multi-issue voters. I also began efforts to get out the vote in Ohio and across the U.S.

All of this began with praying the rosary for Trump.

And so, I suspect Joe Biden is onto something as he fingers the mini rosary he always carries in his pocket. It was given to him by his late son, Beau. Beau had wanted his father to run for president in 2016. But it was not yet the fullness of time.