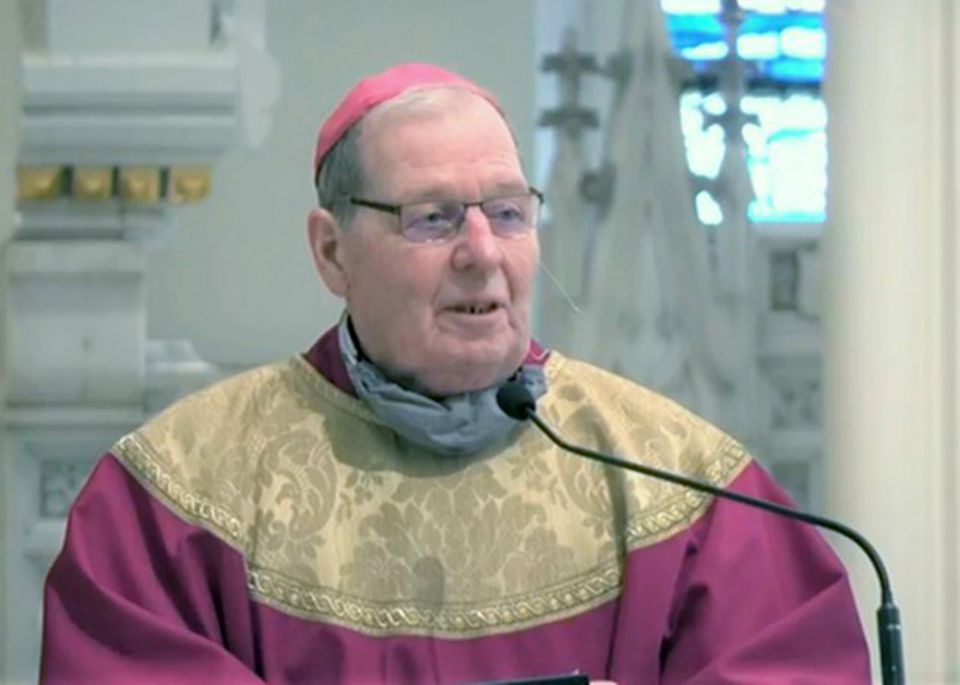 Bishop Robert P. Deeley of Portland, Maine, is seen during Ash Wednesday Mass at the Cathedral of the Immaculate Conception in Portland Feb. 17, 2021. (CNS photo/courtesy Diocese of Portland)

Under the order, fewer than 10 of Maine's 141 Catholic churches would be able to admit more people to Mass, despite many worship spaces exceeding 20,000 square feet in size, the diocese said.

Mills' order calls for five people per 1,000 square feet of space or up to 50 people, whichever is greater.

"This ruling is unacceptable and does nothing to provide relief to our parishes and parishioners," Deeley said in a Feb. 18 statement released by the diocese. "Many Maine Catholics who were frustrated by the previous limits are now perplexed and upset."

The bishop called on Mills to reconsider the plan and "go to a percentage model."

"We have asked for even 25%, but the governor's office will not engage in a discussion on why that makes sense. This ruling, though sold as an 'expansion,' provides no real advance for the vast majority of the state," Deeley said.

The diocese said Catholic churches in the state have successfully held more than 20,000 public Masses with restrictions and safeguards in place under the pandemic and that no COVID-19 outbreaks have been traced the churches.

Deeley said an expansion of limits on gatherings would be appropriate as the season of Lent begins.

"The commitment of the faithful and our parish staff members to ensure safety at Masses has been heroic and our worship spaces are large enough to allow us to safely accommodate more people," he said.

Maine Catholics have endured the hardship of being unable to receive the Eucharist since the pandemic began and emergency health guidelines were put in place last March, he said.

"Our parishioners have suffered enough," Deeley said. "We ask that the governor consider the mental and spiritual needs of Mainers, in addition to her other considerations."

Meanwhile, as Catholics marked the beginning of Lent on Ash Wednesday, the bishop said the observance of the holy season will remain focused on renewal in God despite changes in the distribution of ashes and the addition of livestreaming of services.

Churches in the diocese, like those across the country, distributed ashes by sprinkling them atop people's heads rather than placing them in the shape of a cross on foreheads.

= Deeley said in an Ash Wednesday homily at the Cathedral of the Immaculate Conception in Portland that the ashes serve as a reminder that the faithful are created by God to become vibrant human beings from the dust, or ashes, of the earth.

"Today, we fully acknowledge what our contemporary world often prefers to push away: We are mortal. We die. That is what the ashes mean," the bishop added.

He said Ash Wednesday at its core is a recognition that death also is not the end and that Lent is a call to repentance and a call to work on becoming a better missionary disciple for Jesus.

"We know that we have not always lived as God has called us to live," he added. "Jesus has set a way for us, but we, at times fail to follow his way."

He also reminded worshippers that through prayer, the faithful will understand "what God wants from us and how God wants us to live."

We are a community, not an audience

Confessional is a place of forgiveness, not threats, pope says