In midst of pandemic, chaplain lends listening ear to the caregivers

by Brian Roewe
Coronavirus
People
This article appears in the Saints Next Door feature series. View the full series. 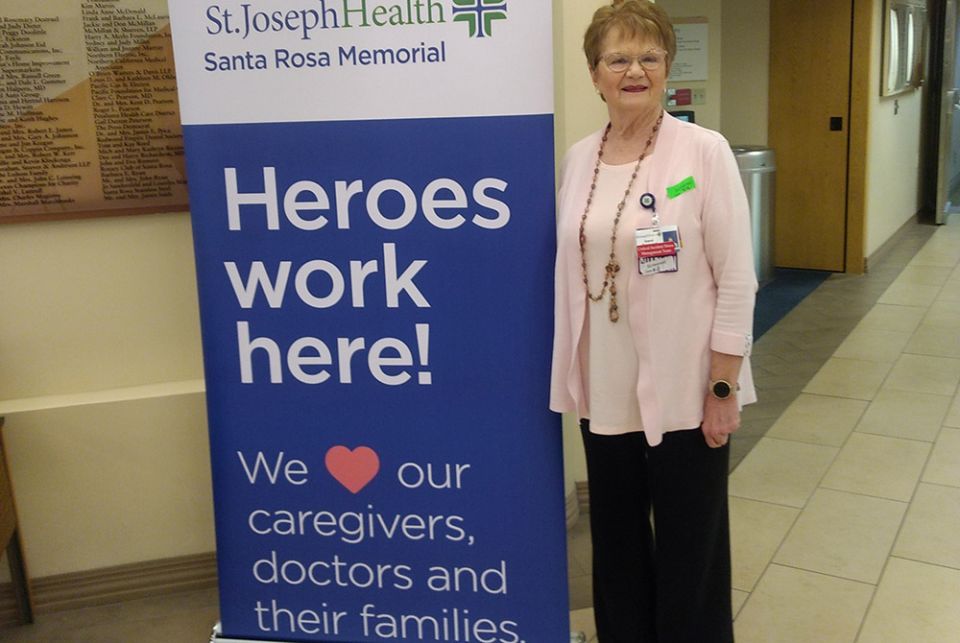 When Carol Raymond visits the sick these days, her mouth is covered but her ears are wide open.

The protective mask the part-time chaplain wears at Santa Rosa Memorial Hospital, in Santa Rosa, California, helps prevent the spread of the novel coronavirus. What it doesn't do is block her from listening to patients, a skill long critical in spiritual care but all the more necessary in the midst of a pandemic.

"When they see a pleasant face and someone that's open to listen, [they] just open up. I mean, I get the whole life story. The beginning of their condition, how they ended up there. And they're just so delighted to have a listening ear," she said.

Preventative measures like the masks that went into effect in late March have closed the northern California hospital to most visitors, meaning many of the infirmed aren't able to have family members by their bedside, whether they contracted COVID-19 or not. With that, comforting the sick has become even more pressing for Raymond and the other eight members of the Santa Rosa chaplain team. She checks out iPads and helps patients make video calls with family. In visits with COVID patients who are unconscious or near death, other chaplains have relayed information to family members or led them in prayer.

No matter the illness, what Raymond hears more than anything is anxious patients repeatedly expressing their desire to be discharged and be home with family again. In the meantime, they're grateful a chaplain offered to stop by. Raymond's main message to patients: You're not alone.

"I'm here for a reason, because I just feel like the door was opened to me to come and visit you and so here I am," she said she tells patients. "And I'm just a messenger, I'm the conduit for God's love, to show you that he still does care."

Worried about contracting the virus herself, Raymond, 78, has focused her time with patients outside the COVID wing, as well as helping the medical helpers themselves. She's noticed more doctors and nurses seeking out chaplains and asking them to visit their units or join morning huddles.

"I feel the staff is hungry for any kind of spiritual care. Any kind of connection with those of us that are there," she said.

Related: Chaplain at the 'epicenter of the epicenter' in New York City prays with, anoints the sick

In response to the pandemic, the hospital, part of the Providence-St. Joseph Health system, instituted reflection time each morning during which a chaplain delivers a brief meditation over the loudspeaker. The morning ritual has become part of the new routine for the medical staff, so much so that when it didn't happen recently, people were asking Raymond, "Where was our reflection?"

So far, Santa Rosa Memorial has avoided the surge in coronavirus patients experienced in other parts of the country. To date, the hospital has treated around a dozen patients hospitalized due to the virus. But a sense of trauma persists as the hospital rapidly changed procedures and protocols to prepare for the worst. Nurses, for instance, describe the stress they feel after they've been reassigned to an unfamiliar unit.

In conversations with beleaguered staff, Raymond will often remind them of the virtues stated in the hospital mission statement — compassion, dignity, justice, excellence, integrity — and that their role as caregivers is more ministry than profession.

She encourages them to remember why they're doing this: "why we would be brave enough to put our own safety to one side, to actually come back into the hospital," she said.

Along with restricting most visitors, the hospital suspended its volunteer program. Masses in the chapel have been canceled, too. Recently, Santa Rosa Memorial has begun slowly restoring essential surgeries and procedures, and with it expanding its list of approved visitors in special cases.

Even with fewer people in the health facility, there's a fear of being too close to someone and possibly transmitting the virus to their families when they head home after a shift.

Like the hospital, Raymond had to prepare herself for the pandemic, too. She used the week before the county stay-at-home order went into effect to hold a personal retreat. She meditated and dove into inspirational readings. She watched online Mass services held at Glastonbury Abbey, in Hingham, Massachusetts, which played an important role in her conversion from daughter of a Methodist minister to Catholicism. The experience, as she put it, helped her get her spiritual house in order, "to try and maybe deepen my faith even further."

"How can I offer spiritual care to someone if I'm not in a place where I'm calm and at peace and I've come to grips with the fear and the anxiety and the uncertainty?" Raymond said.

"I feel like this is what God wants me to do. That I'm doing what God has called me to do. And it isn't just in the easy times, it's going to be in the difficult times like right now."
—Carol Raymond

In their preparation, the Santa Rosa Memorial chaplains also drew from experiences helping people cope from the wildfires that in recent years have blazed through neighborhoods and devastated communities. The hospital was on the front lines in treating patients who suffered burns and respiratory ailments from the suffocating smoke. The doctors and nurses felt the pain, as well, with a number losing their homes to the flames as they were providing care.

As things returned to normal, "the feeling of trauma in the air" still lingered, Raymond recalled. "It's like everyone was wounded because they felt a sense of loss, that part of their beautiful community had been taken away by the fire, and it was no longer there anymore. And how could this happen?"

The chaplains went through crisis management training after the fires to learn how to better support the medical staff and patients. There's a "totally different feeling" with the pandemic than the fires, Raymond said, as not everyone lived in the path of the wildfires. Now, though, everyone is affected.

That includes Raymond and the chaplains, who have had their shifts cut back for the next two months. But going back for her shifts is an easy call. When her family pushes her to quit, worried that she may contract the virus herself, she tells them she can't just quit her ministry, that she's doing exactly what she should be doing.

A former mortgage banker of 35 years, she came to her vocation as a chaplain later in life, at "the perfect time" to go in a new direction. But it's right where she feels she belongs, even during a pandemic.

"I feel like this is what God wants me to do. That I'm doing what God has called me to do. And it isn't just in the easy times, it's going to be in the difficult times like right now."

Coronavirus | In midst of pandemic, chaplain lends listening ear to the caregivers

Fr. Bernie Survil has led a life dedicated to peace

By putting God in the driver's seat, blogging deacon found his path