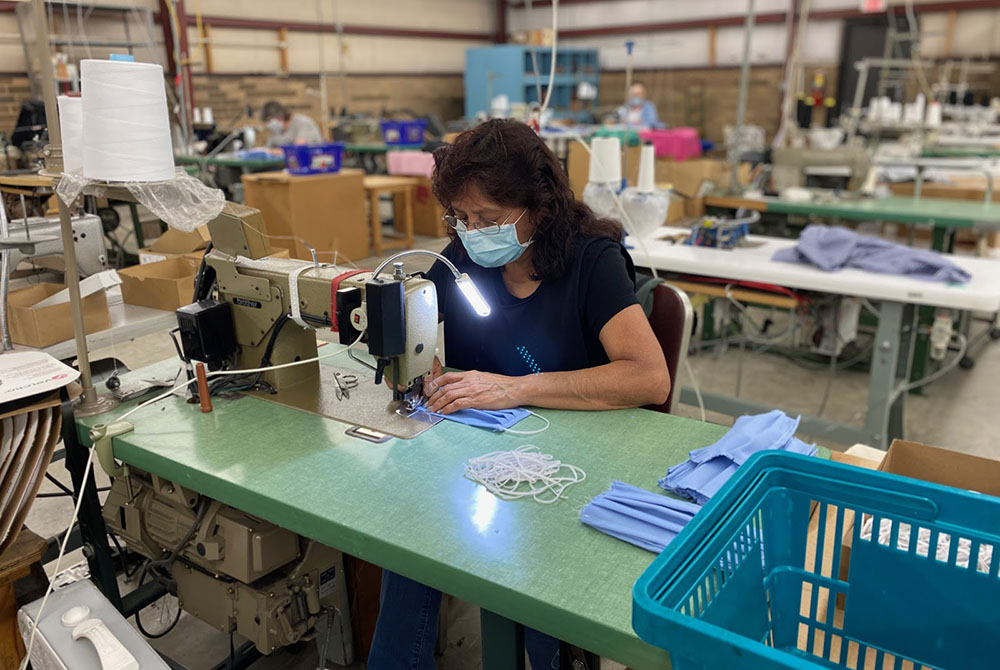 Last month in Morganton, North Carolina, a cut-and-sew textile plant called Opportunity Threads started a new tradition: giving monthly bonuses to workers who consistently meet or exceed output goals. This was Maricela Lopez's idea. As one of the six "member-owners" at Opportunity Threads, she sits on the board and works on the production floor alongside fellow employees, who have been making face coverings since March.

Lopez started at Opportunity Threads in 2012 after five years working at Case Farms, a local chicken farming and processing plant that was the site of a coronavirus outbreak in May. She became a member-owner in 2018 because she wanted to help make decisions to improve the lives of her fellow workers, she said. "I really wanted to be part of this, because when you work at a place like Case Farms, they don't treat you equal," Lopez said. "Here we have the opportunity, we have the power to decide how we want to pay the people who work with us."

Opportunity Threads is one of nine independent partners that make up the core of Carolina Textile District, a network of mills in western North Carolina. The nine Carolina Textile District partners share living wage and benefits standards — all pay more than double the state's $7.25/hour minimum — and the network has an additional 17 collaborator factories. Carolina Textile District is an enterprise of the Industrial Commons, a nonprofit co-founded in 2015 by Morganton native Molly Hemstreet, who also founded Opportunity Threads seven years prior in 2008.* The Industrial Commons, in turn, is partially funded by the Catholic Campaign for Human Development, or CCHD, a program of the U.S. Conference of Catholic Bishops. 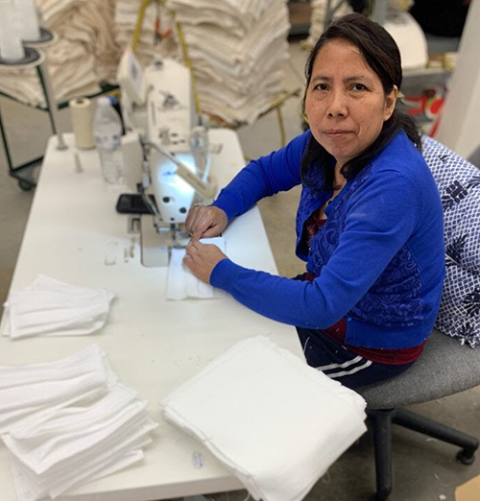 Over the course of the coronavirus pandemic, Carolina Textile District's member factories have produced more than 400,000 units of personal protective equipment and face coverings, and Catholic institutions and organizations have been supporting the network by purchasing masks from CTD's shared sustainable apparel brand, Collection (masks available here). According to Ethix Merch, Carolina Textile District's sales and marketing partner, nine Catholic parishes, schools and organizations have ordered customized masks through a cooperative buying opportunity for Catholic schools and parishes, and the number is still growing. (The current buying opportunity will last until September 15.)**

Ethix Merch CEO Daniel Cardozo, who first learned about ethical clothing manufacturing as an activist in the anti-sweatshop movement, sees Carolina Textile District as a model of ethical labor and environmental practices for the textile industry.

"There are, scattered throughout the country, different worker cooperatives, but not a lot of them are working on textiles," Cardozo said. "What the Industrial Commons is doing is truly innovative, and not only that, but it's being done incredibly comprehensively and professionally, with an eye to both the labor and environmental standards."

The Appalachian region of western North Carolina was historically known for textile production, but many of its mills closed decades ago when much of the industry was moved overseas. Together, Carolina Textile District mills and factories bid on joint contracts, harnessing their collective manufacturing capacity so they can each get enough business to stay open, Hemstreet said. They also use recycled materials when they can, and source raw materials as locally as possible. Even their thread is made in North Carolina.

Cardozo said a large percentage of inquiries to Ethix Merch come from Catholic institutions. Because of this, he has hope that a broad ethical purchasing movement in the Catholic community could be successful. "The anti-sweatshop movement has really needed a large-scale victory to prove this concept that's only been theoretical, that people will put their money behind their values," Cardozo said. 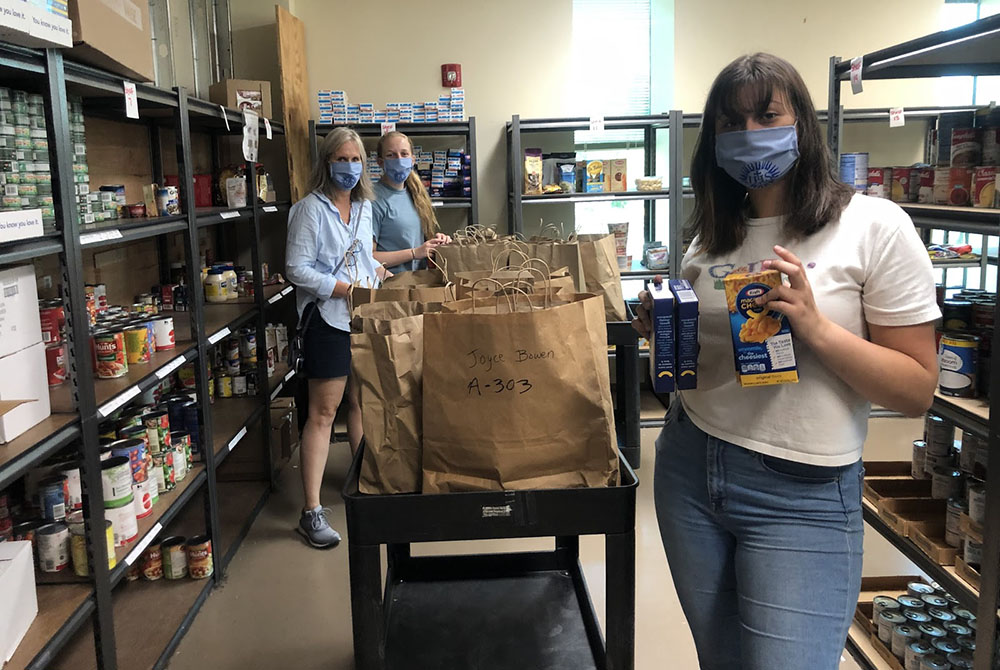 In 2018, the U.S. bishops' conference approved a five-year grant to The Industrial Commons for a total of $2,392,500, said Alexandra Carroll, the conference's communications manager for social mission. As the Catholic Campaign for Human Development nears its 50th anniversary, Carroll said the campaign wants to celebrate the Industrial Commons for its transformational work around the rights and dignity of the worker and care for the environment, as well as its efforts to encourage Catholics to engage in just purchasing. Carroll also praised the organization's pandemic response: "We're thrilled to see this quick pivot to addressing the needs of the community. The pandemic has really revealed this great sense of solidarity among many of our groups, and the Industrial Commons is this great example of seeing a need and stepping in to fill it any way they can," she said. 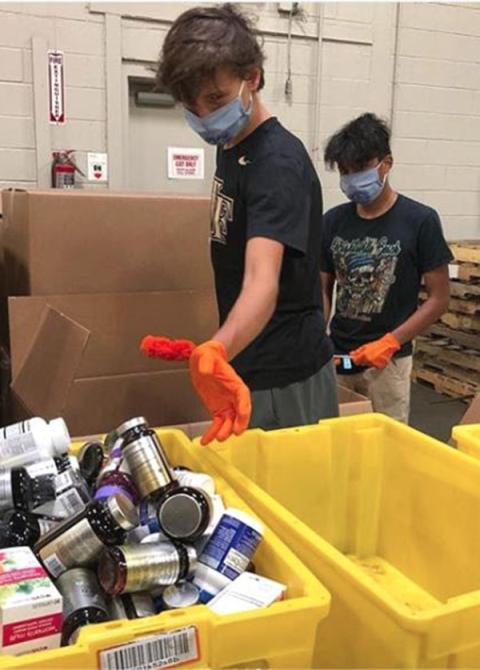 Thus far, one of the biggest Catholic CTD customers and promoters has been the Ignatian Solidarity Network, or ISN. Executive director Chris Kerr said buying ethically produced face masks is a great way to "double down" on the Ignatian value of solidarity, since the masks both support workers and protect communities from the spread of COVID-19. (ISN-commissioned Collection "Solidarity" masks are available for purchase here.)

The pandemic has given Carolina Textile District a unique opportunity to help local factories keep people employed by providing them with work making face coverings and personal protective equipment, Hemstreet noted in a mini-documentary about the network's response to the coronavirus. As more factories have joined the effort, the number of CTD collaborators has grown, she said.

So far, Carolina Textile District has paid out approximately $1.5 million to small manufacturers, with grants to the Industrial Commons floating some of the upfront costs of materials and payments, Hemstreet said.

In addition to selling masks and personal protective equipment to the state, the Burke County public school district and the local hospital, Carolina Textile District has donated masks to local organizations and individuals that need them, including local farmworkers, Education Without Barriers NC and Burke Health Network, which supports people without health insurance, said Kathryn Ervin, the Industrial Commons's storyteller and spokesperson.

At Opportunity Threads, the majority of employees are Mayan and immigrated to the U.S. from Guatemala, Hemstreet said. (Many attend Morganton's St. Charles Borromeo Catholic Church.) Two employees have lost family members to the virus. The plant was the first in Burke County to test all its workers for the coronavirus, and several were found to be infected but asymptomatic. Each of these infected individuals had been in contact with people who worked at Case Farms, the poultry processing plant, Hemstreet said. The infected employees were sent home to quarantine and paid while they were on leave, member-owner Walter Vicente pointed out. 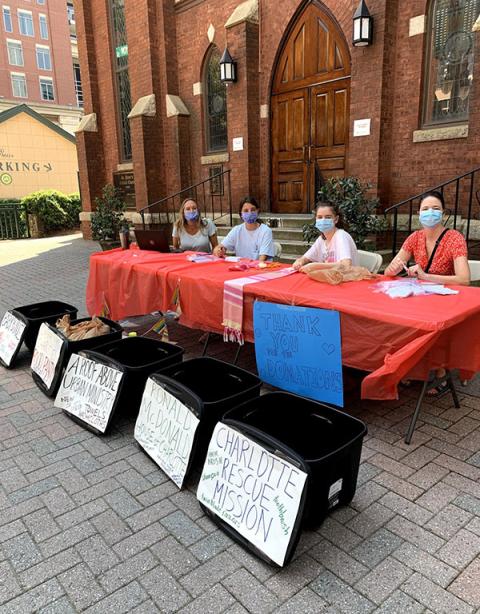 Vicente, Lopez's husband, said they and their four children had lived in apartments throughout their time in North Carolina, but in 2017 they were able to buy a house. Vicente dreams of extending economic opportunity to others by hiring more people who currently work at Case Farms, he said. But in order for the cooperative to keep expanding, it will need continuing business during and after the pandemic.

One supporter has been St. Peter Catholic Church, a Jesuit parish in Charlotte, North Carolina. The church ordered about 50 Collection masks for its Teen Serve Week volunteers this July.

Jesuit Fr. Jim Shea, the pastor, aligns the church with the Jesuit universal apostolic preferences, which include care for the environment and giving dignity to the poor and the outcast, said Joan Guthrie, the parish's communications coordinator, who visited Opportunity Threads in January with a group of Catholic leaders.***

She met women there who told her working at the company had changed their lives, enabling them to send their children to college and giving them more time to spend with their families. "When you hear that, you want to support them, and if it's a few more dollars for a T-shirt, it's worth the money," Guthrie said.

Loyola School in New York City has purchased Collection masks for this fall, thanks in part to Amber Delgado, a senior there who delivered a presentation earlier this year on the difference between ethical production and fast fashion, after her teacher Sue Baber visited two Carolina Textile District mills with a group of Catholic leaders in January. Delgado is now hoping her class will order ethically produced senior sweatshirts. The connection between ethical purchasing and the Jesuit value of being "a person for others" is clear, she said.

[Lucy Grindon is an NCR Bertelsen intern. Her email address is lgrindon@ncronline.org.]

Related: US bishops' anti-poverty program puts Laudato Si' into action with $500,000 grant
This story appears in the Saints Next Door feature series. View the full series.
A version of this story appeared in the Sept 18-Oct 1, 2020 print issue under the headline: Ethical purchasing movement is growing.