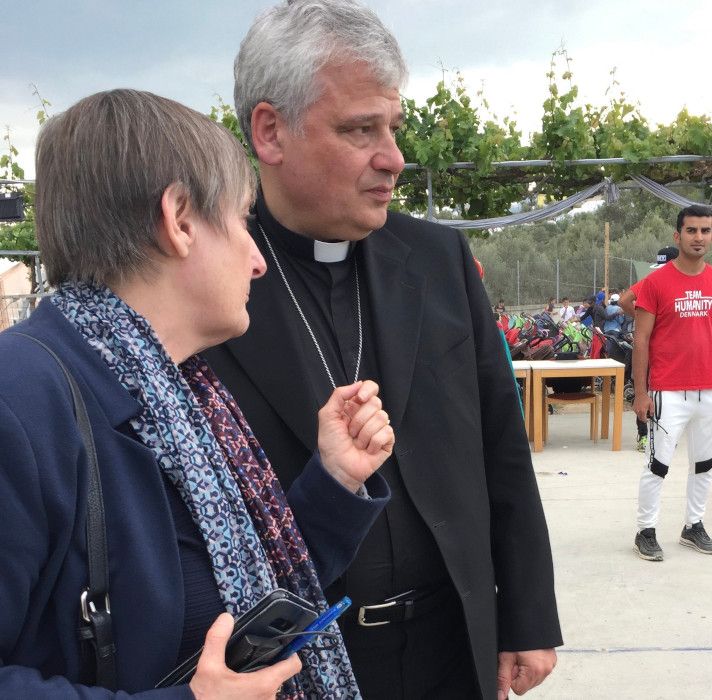 Daniela Pompei confers with Cardinal Konrad Krajewski, the papal almoner, during a May 2019 visit to the Moria refugee camp on the Greek island of Lesbos. The cardinal has tested positive for COVID-19 and is hospitalized. (CNS/Cindy Wooden)

Krajewski, the 57-year-old papal almoner, was tested at the Vatican health clinic early Dec. 21 and was hospitalized at Rome's Gemelli hospital with the initial signs of pneumonia.

Bertello, the 78-year-old head of the commission governing Vatican City State, also tested positive, but was quarantining at his Vatican apartment.

People who had been in close contact with the two have been monitored, a Vatican source said Dec. 22, and neither of the cardinals attended the pope's meeting Dec. 21 with officials of the Roman Curia. At a meeting later that day with Vatican employees, many of whom work for the city-state, Bertello also was absent; instead Bishop Fernando Vergez Alzaga, secretary-general of the office, attended.

The Vatican has had at least 30 cases of COVID-19, although it has reported no deaths.

Dr. Fabio De Giorgio, who works at the Vatican health center, was one of those who had tested positive and has since recovered. He was chosen to speak on behalf of the lay employees at the meeting with the pope Dec. 21.

Urging his fellow employees to work together and help one another, the doctor told them and the pope that "we know it will not be over quickly, but even if we must still face days of suffering, the certainly that better days are coming gives us hope."

Dr. Andrea Arcangeli, director of the Vatican health service, had announced Dec. 11 that the Vatican would begin vaccinating employees early in 2021.

After someone who attended the pope's Oct. 21 general audience tested positive, the pope stopped holding the gatherings with the public present and instead returned to livestreaming the weekly appointment from the library of the Apostolic Palace.

Cardinal Luis Antonio Tagle, prefect of the Congregation for the Evangelization of Peoples, tested positive upon arrival in the Philippines in early September.

The Vatican had confirmed its first COVID-19 case in early March, saying it was a priest from the hard-hit city of Bergamo who had first gone to the Vatican health clinic for a routine pre-employment exam. By early June, the Vatican had registered 12 cases among employees and residents.