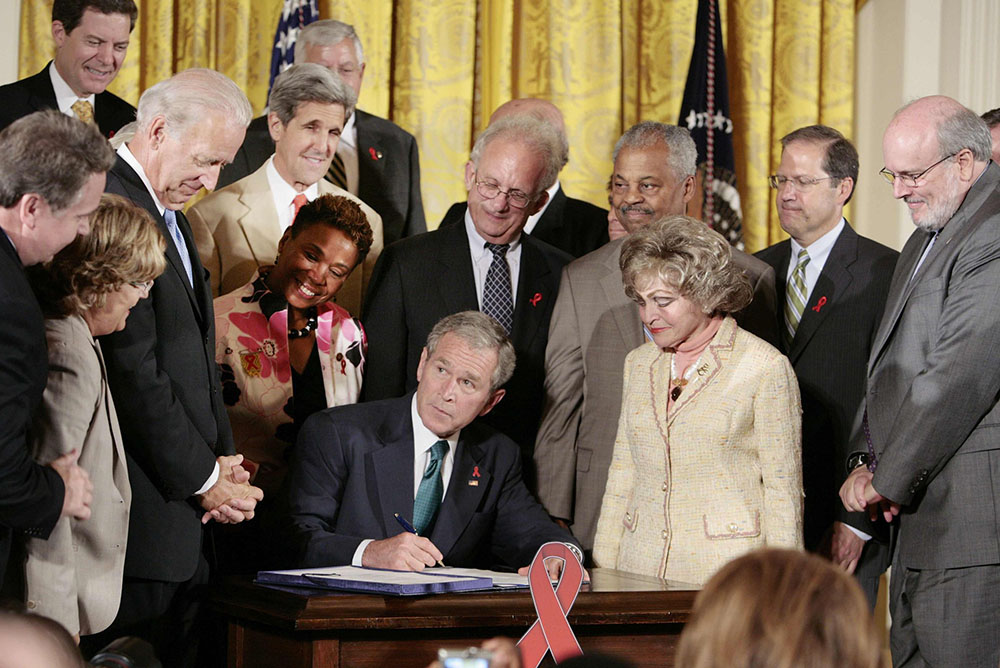 President George W. Bush signs a bill that extends the President’s Emergency Program for AIDS Relief, known as PEPFAR, surrounded by lawmakers and other supporters of the program at the White House in Washington July 30, 2008. (CNS/Reuters/Larry Downing)

Today is World AIDS Day. It is difficult to explain what a terrible time the late 1980s and the 1990s were, and I am so grateful to my friend and colleague Michael O'Loughlin for writing his book Hidden Mercy: AIDS, Catholics, and the Untold Stories of Compassion in the Face of Fear. Those stories are untold no more. Michael Vasquez reviews O'Loughlin's book for NCR today here.

We are again in the midst of a pandemic but the two experiences are vastly different. AIDS was not easily transmitted and, at first, mostly afflicted only gay men, intravenous drug users and Haitians. COVID-19 is easily transmitted and can afflict people of all kinds and all stations in life.

AIDS victims often were stigmatized unfairly, but I think we could do with a little more stigmatization of those who proudly refuse to get a COVID-19 vaccine and then contract the disease — unless they repent their unwillingness to take what is such an obviously moral step and become vocal advocates of vaccination.

And it took years before we could even get the federal government to join the fight to find a treatment for AIDS, whereas the government has been more or less on top of the fight for treatments and vaccines against COVID-19.

By the dawn of the new century, the combination of nucleoside reverse-transcriptase inhibitors with antiretroviral drugs produced a drug cocktail that was enormously effective in treating AIDS. The drug cocktail was also relatively expensive, so while the disease was now no longer a death sentence for millions of Americans, Western Europeans and wealthy people everywhere, the spread of AIDS, especially in sub-Saharan Africa, continued at a frightening rate.

In 2003, President George W. Bush signed authorizing legislation for the President's Emergency Plan for AIDS Relief, or PEPFAR. According to the Bush Presidential Center, PEPFAR has saved 18 million lives, tested 79.6 million people, and helped 2.6 million babies be born AIDS-free despite the fact that their mothers were infected. If you want to know what pro-life legislation looks like, PEPFAR is it. It has been reauthorized three times and the Biden administration is the fourth to continue the program.

There is worry that the fight against COVID-19, and the disruptions in supply chains, will take away resources from the ongoing fight against AIDS. Nonetheless, labs and testing facilities set up with funding from PEPFAR are now being used to help fight COVID-19. Indeed, PEPFAR helped create a medical infrastructure in sub-Saharan Africa that simply did not exist before, and without which the fight against COVID-19 might be even more dire.

The new omicron variant of the COVID virus has reminded us that no one is safe until the whole world is vaccinated. In September, President Joe Biden announced he was doubling the purchase of Pfizer vaccines to be shared with the world, bringing the total to 1 billion. "To beat the pandemic here, we need to beat it everywhere," Biden said.

In light of the new variant, those words are truer than ever. And good for Biden for praising the health authorities in South Africa for the speed with which they identified the new variant and their openness in sharing what they found with the world.

Shame on us, we have not even put our own house in order, with not even 60% of the American people fully vaccinated. In America, where cost and medical infrastructure are not at issue! There is a special place in hell for all those Republican governors, and those at Fox News and its Catholic acolytes, who demonize vaccine and mask mandates.

It is shocking that Archbishop Timothy Broglio of the military archdiocese signed a letter put out by former President Donald Trump's Faith Advisory Board calling on the military to grant religious exemptions to the vaccine mandate. Broglio is more libertarian than Catholic in his stance. I am sure he will get a round of applause at the next Napa Institute gathering.

Even those who are vaccinated are losing patience in the face of this new variant. The Washington Post was sadly correct when it noted, "After nearly 21 months of coronavirus restrictions, there is little appetite in the country for the kinds of school closures, indoor-gathering bans and restaurant restrictions that defined the early days of the pandemic, according to health officials, who say the political will to push for unpopular — but effective — mitigation measures is waning."

Look around folks. Whatever else we are, we are not the greatest generation.

It is not even 20 years since Bush led the nation in an altruistic crusade to eradicate AIDS in the poorer countries of the world. Do we have the compassion and the courage to mount such an effort again?

On this World AIDS Day, let's hope we can find the better angels of our nature before it is too late. And, maybe in the process, we will find a moral antidote to the libertarian foolishness at home.

Read this next: 'Hidden Mercy' sheds light on history of the Catholic Church and HIV/AIDS