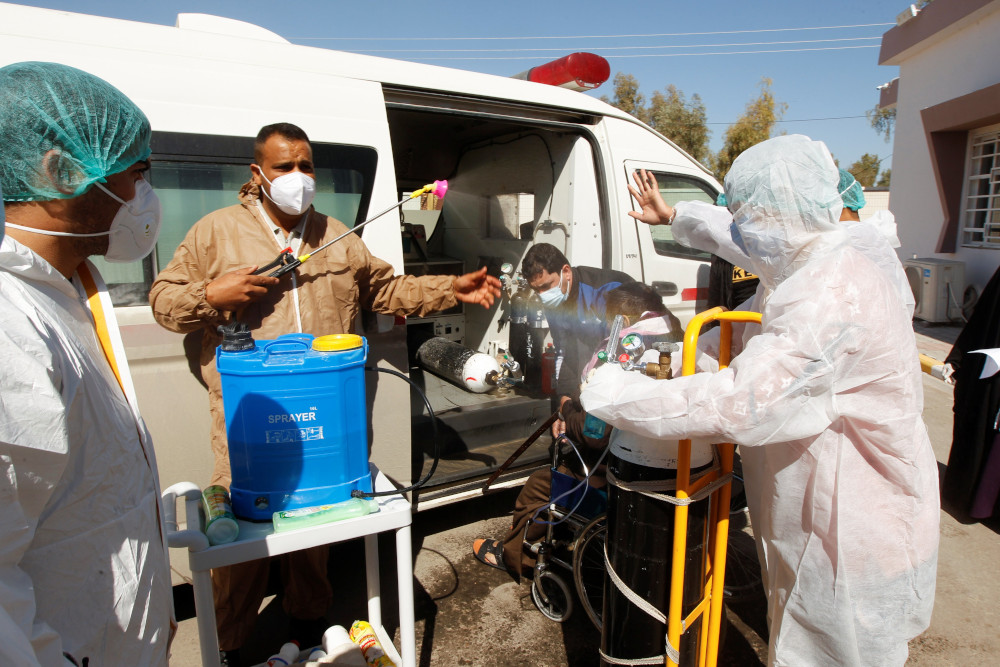 A medical team member sprays disinfectant on a person believed to have the coronavirus as he is being brought to a hospital in the holy city of Najaf, Iraq, Feb. 25, 2021. (CNS/Reuters/Alaa Al-Marjani)

A week before Pope Francis was scheduled to arrive in Iraq, the Vatican nuncio in Baghdad and several members of the staff tested positive for COVID-19 and began self-isolating.

The embassy confirmed the news Feb. 28, after the nuncio, Archbishop Mitja Leskovar, told the news agency Reuters that although he was experiencing light symptoms and was in self-isolation, the pope's visit was going ahead.

Francis is scheduled to visit Iraq March 5-8. He usually stays at the nunciature when he visits a country. Italian news reports said those in Baghdad who tested positive had moved out of the residence and it was being sanitized.

As the number of COVID-19 cases in Iraq began increasing in early February, the government announced a new lockdown, which began Feb. 18. Churches and mosques are closed, and there is a "total curfew" Friday-Sunday and an 8 p.m.-5 a.m. curfew the rest of the week at least through March 8. Grocery stores, bakeries and pharmacies can remain open and people may leave their homes to go to them.

According to the Worldometer coronavirus tracker, the number of new cases of COVID-19 discovered each day in Iraq had fallen below 1,000 in late January, but soon began rising, hitting 4,336 Feb. 26. However, the daily death toll has not been over 30 since early December.

Chaldean Catholic Archbishop Bashar Warda of Irbil told the television station Kurdistan 24 that it was "historical and courageous" for the pope to visit Iraq at a time of continuing security threats and the COVID-19 pandemic.

The largest event on the pope's schedule is a Mass March 7 in a stadium in Irbil. The number of tickets has been limited to 10,000 to ensure social distancing, the bishop said.